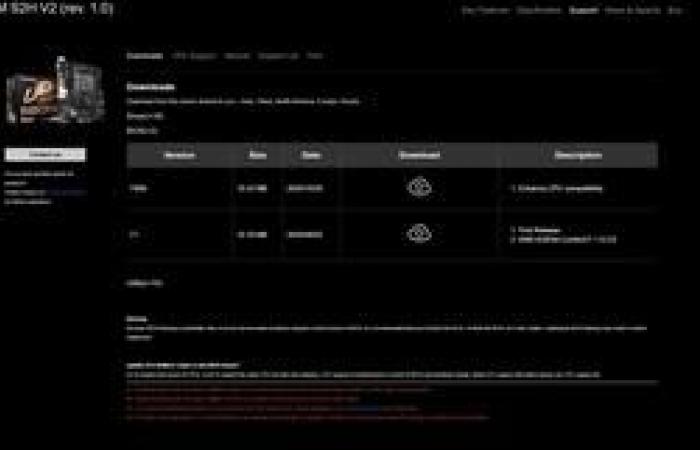 The BIOS updates of the B450 and X470 mainboards for Zen 3 (Vermeer) should not follow until the beginning of 2021, because the current B550 and X570 mainboards have priority first. But on Gigabyte’s website new BIOS versions have been published for the B450 mainboards, which, according to some indications, indicate that these are actually intended for the Ryzen 5000 processors, which will be available from November 5th.

For all B450 models listed, version F60b appears on the BIOS download page, which is not a final, but a beta BIOS. “Enhance CPU compatibility” is always stated as a change, which initially cannot be interpreted as a clear indication of the support for the Zen 3 processors. But a further look at our own community shows that the F60b BIOS contains AMD’s AGESA version ComboAm4v2 PI 1.1.0.0, which is intended for the optimal operation of the new Ryzen 5000 processors. Our community member xSpy has left a corresponding post in our forum including a screenshot.

We have linked the corresponding BIOS updates for the Gigabyte B450 motherboards below:

It is questionable whether Gigabyte accidentally released the BIOS versions or whether this was intended in consultation with AMD. Furthermore, it remains open – provided AMD has given the green light – whether the other well-known motherboard manufacturers will follow suit and also consider the X470 models in the near future. Should we have any news about this, we will update this news accordingly.

Gigabyte has now released the BIOS update for Zen 3 for the X470 models as well:

Gigabyte has replaced the BIOS versions (F60b) published yesterday for the B450 mainboards with the F60c version, which has also been offered for the X470 boards since today. We have changed the links for the BIOS updates for the B450 models accordingly.

In the meantime, ASRock also offers a new BIOS for its own B450 mainboards that enables the use of the new Ryzen 5000 processors. ASRock considered the following models:

At MSI, too, it seems to be starting with the first BIOS updates for the B450-MAX mainboards, which contain AMD’s AGESA version ComboAM4V2PI 1.1.0.0 and are therefore suitable for the operation of the new Ryzen 5000 processors. A corresponding BIOS update is available for the following MSI-B450 mainboards:

These were the details of the news New BIOS for B450 mainboards: Gigabyte releases AGESA 1.1.0.0 for Zen... for this day. We hope that we have succeeded by giving you the full details and information. To follow all our news, you can subscribe to the alerts system or to one of our different systems to provide you with all that is new.