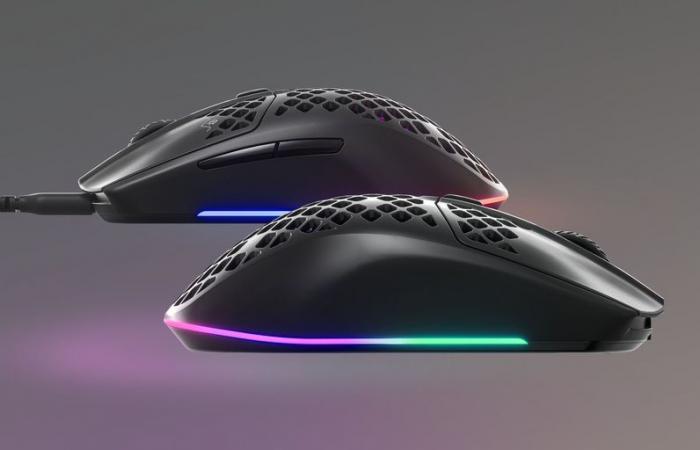 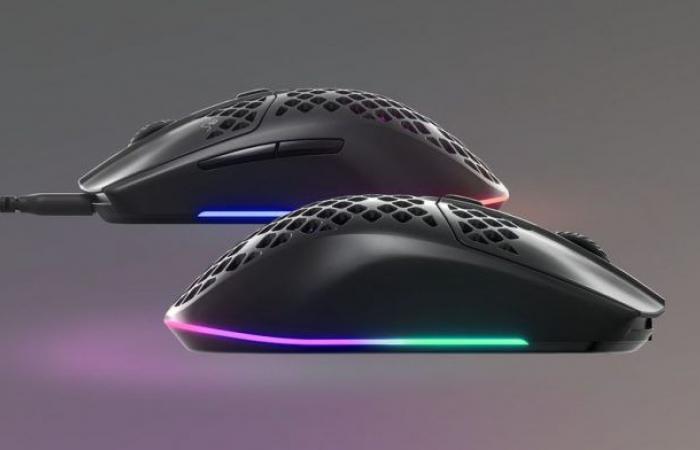 Mouse manufacturers are fighting on the lightness front, wired and wireless. SteelSeries intends to hit hard with its Aerox 3 and Aerox 3 Wireless, weighing respectively only 57 g and 66 g thanks in particular to their openwork hull.

Mouse manufacturers emphasize lightness, both for their wired and wireless models. So much so that the 2018 G Pro Wireless would almost seem heavyweight now, when it weighs just 80g. Much more in any case than the new Aerox 3 from the manufacturer SteelSeries, which immediately ranks among the lightest mice on the market.

The wired Aerox 3 weighs only 57 g, which is still 10 g less than the already very light Glorious Model O and 9 g less than the Roccat Kone Pure Ultra. To achieve such a low mass, SteelSeries did not go all the way, perforating the shell of its mouse and even the upper part of its main buttons. Well aware that this very ventilated design is not without posing some problems of infiltration of dust and other dirt, SteelSeries ensures an IP54 certification for its Aerox 3, which gives it resistance to dust and water splashes. . What in principle ensure a good longevity, in the absence of cleanliness.

Despite the symmetry of its hull, the Aerox 3 is not truly ambidextrous, since only its left edge is entitled to 2 buttons. The mouse’s “Super Mesh” USB-C cable is designed to be particularly flexible and not obstruct movement. Finally, a 3-zone backlighting is responsible for brightening up the whole.

On the sensor side, we are entitled to the TrueMove Core developed jointly with the sensor specialist PixArt. It has a maximum sensitivity of 6500 dpi and supports speeds up to 7.62 m / s and accelerations up to 35 g. More than enough, although other sensors display more impressive characteristics.

The wireless version of the Aerox 3, soberly bearing the Wireless label and using the same Quantum 2.0 Wireless technology as the Rival 3 Wireless from SteelSeries, uses the same openwork design as the Aerox 3 and trades its wire for a small battery which only weighs it down by 9 g. At 66g, the Aerox 3 Wireless is even lighter than the Razer Viper Ultimate (74g). This does not prevent it from offering up to 80 hours of battery life in high-performance 2.4 GHz radio link mode, and up to 200 hours in Bluetooth (for office), according to SteelSeries. Fast charging using the supplied “Super Mesh” USB-C cable would also allow you to regain 40 hours of battery life in just 15 minutes.

Question sensor, this time it is a TrueMove Air, still manufactured by PixArt, but offering even better performance than the TrueMove Core of the wired Aerox 3: 18,000 dpi sensitivity, speeds up to 10.16 m / s and accelerations up to 40 g, all with 1: 1 tracking so you don’t miss a single pixel. The backlight is not abandoned despite the wireless operation.

*The article has been translated based on the content of Source link by https://www.lesnumeriques.com/souris/souris-gaming-steelseries-aerox-3-66-g-seulement-pour-la-wireless-57-g-pour-la-filaire-n156365.html
. If there is any problem regarding the content, copyright, please leave a report below the article. We will try to process as quickly as possible to protect the rights of the author. Thank you very much!

These were the details of the news SteelSeries Aerox 3 gaming mouse: 66g only for Wireless, 57g for... for this day. We hope that we have succeeded by giving you the full details and information. To follow all our news, you can subscribe to the alerts system or to one of our different systems to provide you with all that is new.