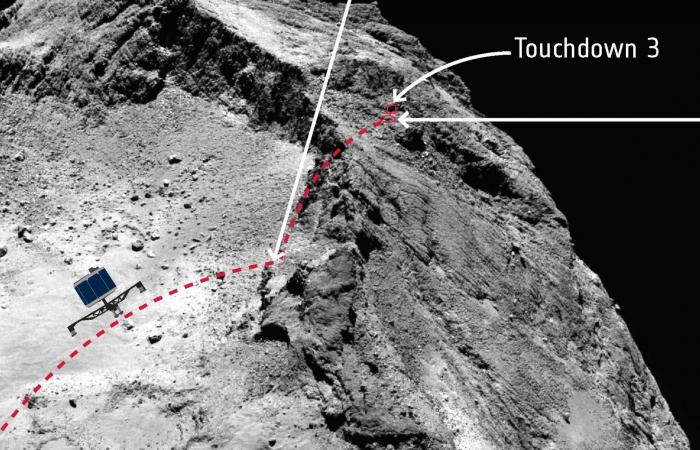 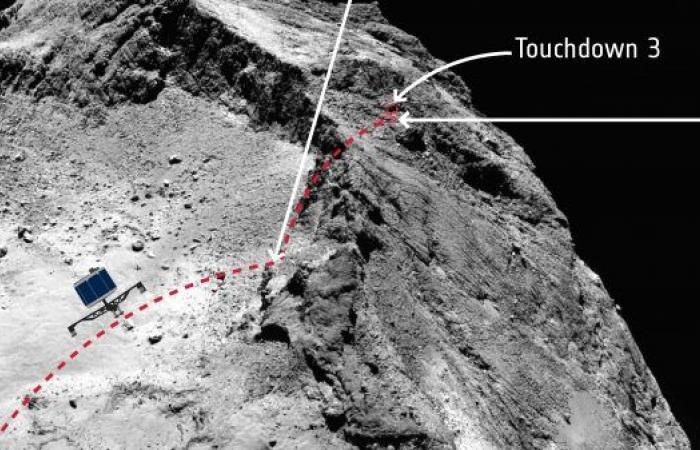 Philae has finally delivered his last mystery: the location of the second point of impact during its landing, much more eventful than expected. He has indeed performed several high-level acrobatics (or almost), allowing scientists to deduce information on the composition of the comet.

The European Space Agency (ESA) and the Paris Observatory have brought us back almost six years. It is indeed question of the adventures of the small robot Philae which became, on November 12, 2014 (after a journey of 10 years and 6.5 billion kilometers in space), the ” 1st man-made object ”To land on a cometary nucleus: comet 67P / Churyumov-Gerasimenko, alias“ Tchouri ”.

The small landing module made the trip in the Rosetta probe, before being released. He then descended quietly towards the comet at an average speed of 3.5 km / h (slower than a walking man). This trip lasted several hours, before the verdict fell: Philae had hit the comet… before bouncing twice (and even more).

During his mission, Philae indeed arrived at the planned site: Agilkia. Problem, his harpoons did not work properly to hold him on the surface. He therefore bounced back by leaving for a two-hour tour all the same. During this phase, ” it collided with the edge of a cliff and tumbled to a second landing site ».

A second rebound later – of seven minutes this time – and it finally lands in a sheltered place where it remained afterwards: Abydos. The latter was not formally identified in the images taken by the Rosetta probe until almost two years after the landing (in 2016), i.e. just a few weeks before the end of the Rosetta mission. As a reminder, the probe gives a final kiss to the comet. To put it bluntly, we can say that it crashed on purpose (to avoid wandering like a lost soul).

Of this journey, there remained a major unknown: where was Philae’s second landing site? ” After years of detective work, [il] was identified on comet 67P / Churyumov-Gerasimenko in a place whose shape resembles a skull », Explains ESA. This work is the subject of a scientific publication in Nature.

A journey rich in twists and turns!

*The article has been translated based on the content of Source link by https://www.nextinpact.com/article/44400/le-dernier-mystere-philae-sur-comete-67p-est-enfin-resolu
. If there is any problem regarding the content, copyright, please leave a report below the article. We will try to process as quickly as possible to protect the rights of the author. Thank you very much!

These were the details of the news Philae’s ‘last mystery’ about comet 67P is finally solved for this day. We hope that we have succeeded by giving you the full details and information. To follow all our news, you can subscribe to the alerts system or to one of our different systems to provide you with all that is new.