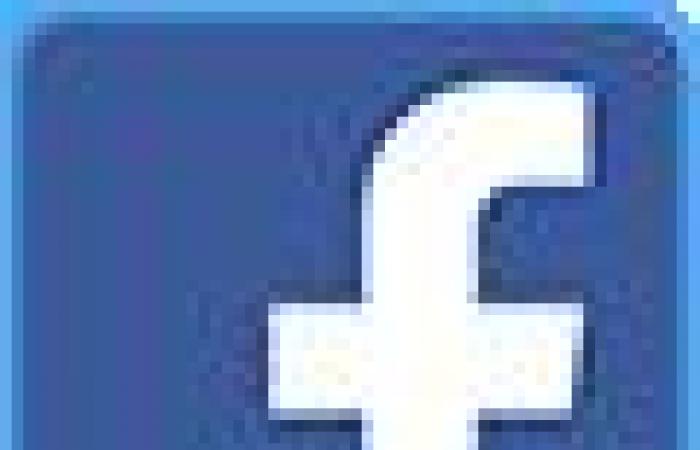 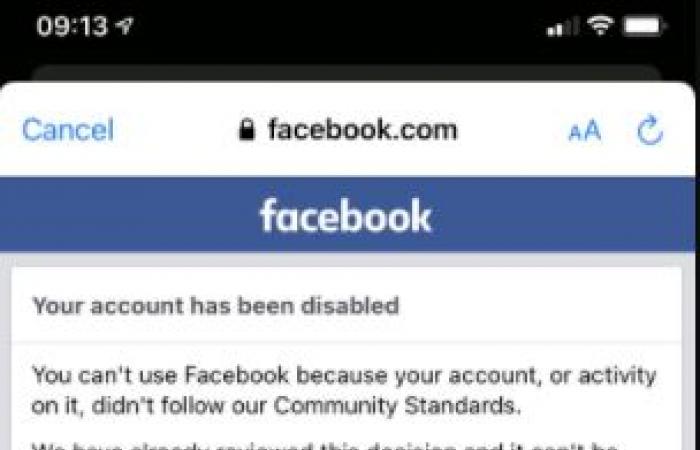 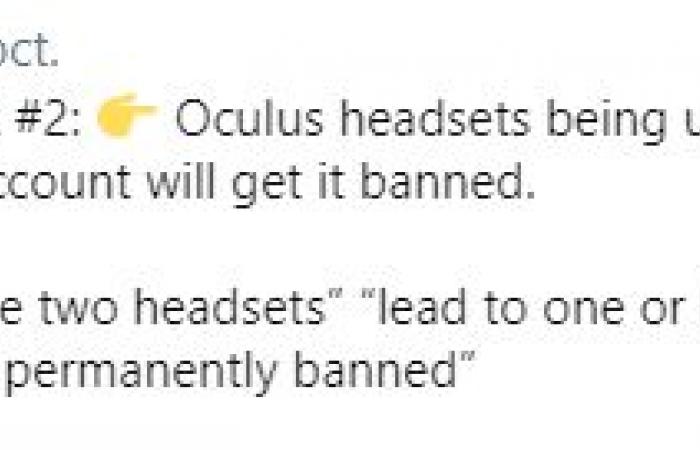 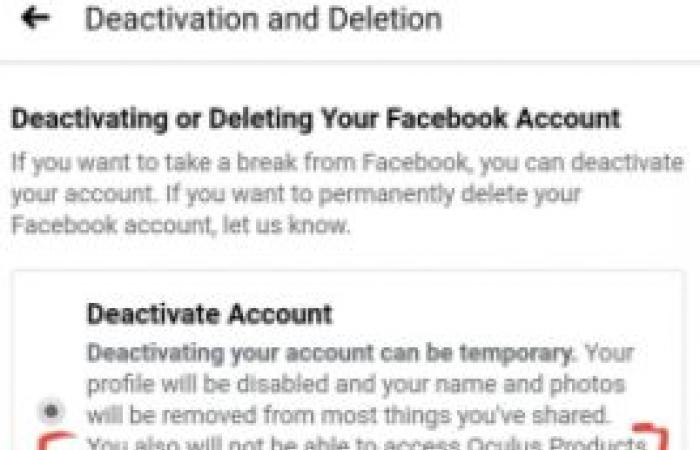 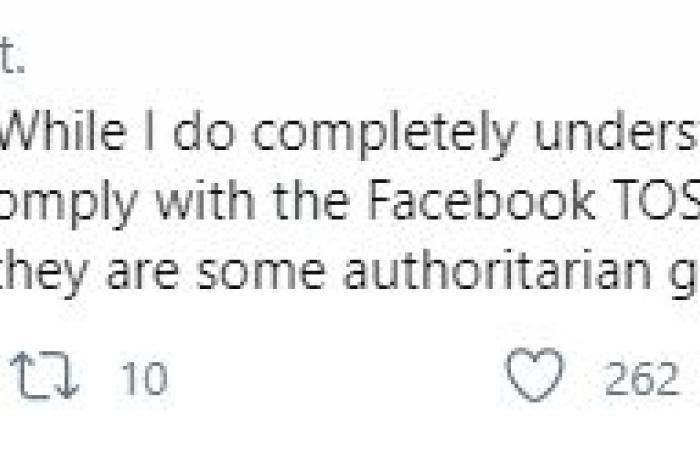 In August, Oculus announced updates on how people connect to their devices while maintaining their VR profile:

Several people indicated that they had a problem with their Facebook account that prevented them from using their headphones. For example, a user spoke about his msadventure with this update:

I got my Oculus Quest 2 today and created a new Facebook account with my real name (never had one before) and merged my 4 year old Oculus g account with it. I was quickly banned 10 minutes later and can no longer access my account or use my device.

I sent a driver’s license photo ID as requested by Facebook and my account now says “We have already reviewed this decision and it cannot be overturned.” trying to log in it looks like i lost all of my previous Oculus purchases and now have an all white screen. 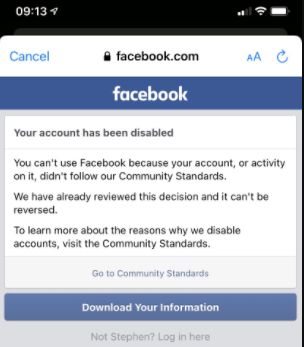 Oculus owners have warned that if they leave Facebook, their purchases will be deleted

Oculus users, already enraged by Facebook forcing them to have a Facebook account to use their Oculus headsets, have been warned that they could lose all of their Oculus purchases and account information in the future. ‘they deleted their profile on the social network.

If they do not adhere to these rules, the applications installed on the headsets may no longer function as expected.

The decision to consolidate what many users see as largely independent activities (playing video games and accessing social media posts) has led to a wave of anger among Oculus users and a new online effort to jailbreak it. new Oculus headset to bypass Facebook’s growing restrictions.

This outrage gained momentum when Facebook initially said that if people try to connect more than one Oculus headset to a single Facebook account, which families in particular want to do because it doesn’t take long to have the same app installed again. and again, they could not use the service.

Facebook has since abandoned this threat and said it is working to allow multiple devices and accounts to connect. But the CEO of fitness games company Yur, Cix Liv, shared a screenshot of what Facebook is saying about the new Oculus terms of service:

Deleting your Facebook account will also delete your Oculus information. This includes the apps you have purchased and your accomplishments 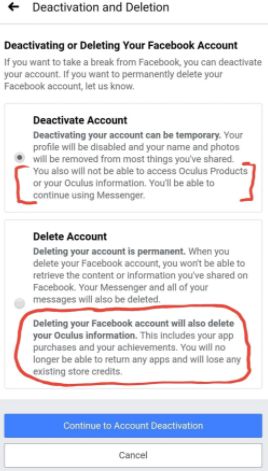 Sharing the screenshots of the exchanges between an angry user and Facebook, he says: My favorite line is “While I fully understand your concerns, we need you to comply with Facebook’s terms of service,” as if Facebook thinks that this is an authoritarian government, he tweeted.

The Oculus Quest 2 jailbreak which allows to bypass Facebook services

Calls for an Oculus Quest 2 jailbreak (a way to free the device from Facebook account requirements and other software restrictions) escalated within days of the headset being released. The first headset jailbreak seems to be operational.

XRSI, a nonprofit promoting privacy and security in the XR space, said it has tested a Quest 2 jailbreak method that allows full control of the device and can bypass the Facebook account requirement. Here is the full statement from Kavya Pearlman, founder of XRSI, via the group’s blog, Ready Hacker 1:

A researcher in the XR community has obtained Oculus Quest 2 root access and is able to bypass the Facebook login. XRSI’s own researchers validated this jailbreak and are currently working to collect assurances to protect those who have discovered these jailbreak methods. We have also learned that there are other researchers who have gained similar access and do not know how to proceed without clear policies on the right to repair. If you are one of these researchers, we invite you to contact us and share the details in a secure way.

On the same post, it is recalled about the Right to Repair this: Would you buy a device, knowing that if you did something to better understand the functionality and investigate its faults, it will become useless? While options exist to repair the device, perhaps even through DIY, the manufacturer’s terms state that you are not allowed to repair, break, or DIY it. What could be worse is if the manufacturer had the right to put you in jail or otherwise reprimand you for attempting to repair your own device, for whatever reason. This is the premise of the “right to repair”, a US government legislation that aims to allow consumers to repair and modify their own consumer electronic devices, while the manufacturer of these devices requires the consumer to use only the services offered.

Days after the launch of the Oculus Quest 2, Robert Long, a WebXR developer at Mozilla, offered $ 10,000 of his own money to anyone who could free Quest 2 from Facebook services. Soon after, Oculus founder Palmer Luckey vowed to match the generosity of Long, who won the support of a few other voices in the community.

Long said in today’s news that XRSI’s legal and security expertise has been crucial in moving this effort forward. He had originally planned to launch a crowdfunding so that the premium is even greater for the jailbreak, but it seems he was ahead on the subject. Nonetheless, he stated that he intends to hold his offer and encourages those who have offered corresponding support: I am still determined to pay my bonus and I hope community members will do so too when we have. Understood what is at stake, Long said.

XRSI, the organization that verified the Quest 2 jailbreak, decided to create standards, guidelines and awareness for XR stakeholders.

The group came up with a framework that they say is a free, globally accessible rulebook, built by bringing together a diverse set of experts from diverse backgrounds and fields, including privacy and cybersecurity, cloud computing, immersive technologies, artificial intelligence, legal, artists, people in product design, engineering and many more.

One of the many issues surrounding jailbreaking is invariably the right to repair, the ability to have full control over the hardware and software you own, which is traditionally applied to smartphones and wearable devices such as smartwatches and fitness equipment. . XRSI wants to help extend the same right to augmented reality and virtual reality headsets, which would include protecting users’ right to jailbreak devices like Quest 2.

Despite its own policies, Facebook has had no problem publicly complaining about Apple’s tough stance on software allowed on its iOS operating system.

My favorite line is “While I do completely understand your concerns, we do need to have you comply with the Facebook TOS” like @FBRealityLabs @Facebook thinks they are some authoritarian government.

These were the details of the news Oculus owners have warned that if they leave Facebook, their purchases... for this day. We hope that we have succeeded by giving you the full details and information. To follow all our news, you can subscribe to the alerts system or to one of our different systems to provide you with all that is new.