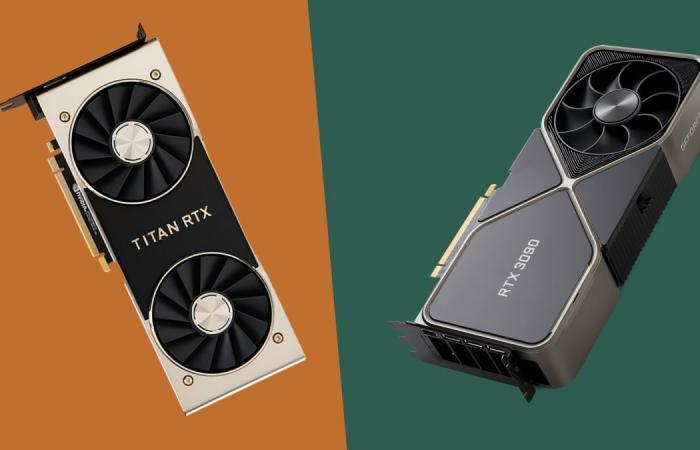 The monster Nvidia RTX 3090 is here. The company claims that its powerful new graphics card will finally bring the reality of 8K gaming closer to anyone who can afford this mighty GPU.

These kinds of claims got us very excited, as many of you know that last year we tested 8K games with the Nvidia Titan RTX, previously Nvidia’s top performing “consumer” card.

That’s still an absolutely huge amount of money, but it’s a lot cheaper than the Titan RTX. If the RTX 3090 can actually beat the Titan RTX when it comes to 8K games for $ 1,000 less, then Nvidia has done a remarkable feat. Especially when the Titan RTX was struggling to play a lot of games at 8K.

To test how good the RTX 3090 is compared to the Titan RTX, we connected the new GPU to our 8K test bench and revisited the games we tried previously at 8K.

Before we dive into the games, let’s take a look at the specs for the two GPUs:

While there are some areas where the Titan RTX is broadly ahead of the RTX 3090, the specs of the newer GPU generally show a decent performance increase. Even if things look the same, such as B. the amount of memory, the RTX 3090 cannot keep up thanks to the faster GDDR6X memory used.

Again, the fact is great that the RTX 3090 is so much cheaper than the Titan RTX and still could offer better performance from a gaming standpoint. This in no way makes the Titan RTX an outdated card, however. It’s also worth noting that the Titan RTX wasn’t really intended for gamers – it was intended more for digital pros and content creators, and compared to professional GPUs, the price was way more palatable.

Red Dead Redemption 2 remains one of the most graphically impressive games ever made. When it hit PC last year, we couldn’t wait to see if the Titan RTX could handle 8K.

As it turned out, it was struggling, only reaching 18.65 frames per second (fps) with the maximum graphics settings applied.

Things improved when we turned the graphics on low and got 26 fps. Still below the playable threshold of 30 fps, but not quite the expected slide show.

However, with the RTX 3090, things have improved a lot. If you set absolutely everything to Ultra or the highest settings, you get 19.02 fps. A jump, but still far from playable. With a little tweaking and limiting some options to medium or high, but mostly on ‘Ultra’, we achieved much better results, with the game averaging 30.74 fps. For many people, this is a perfectly playable frame rate, although others will argue that paying $ 1,499 for a GPU to get just 30 fps means 8K still isn’t realistic.

However, if you lower all settings to the bare minimum, you get a much better frame rate of 44.08 fps, with even highs of 52.8 fps. That’s close to the magical 60fps mark, but there are sacrifices you’ll have to make for graphical fidelity (in some places it looks like a PS2 game).

Doom Eternal is our next game, and when we tried it earlier this year, we were impressed with how well the Titan RTX handled 8K. The settings for ‘Ultra Nightmare’ reached an average of 39.9 fps. Not a bad score considering the high graphics settings and hectic gameplay, but not quite 60 fps.

Meanwhile, the RTX 3090 offered an incredible improvement. In the Ultra Nightmare settings, it reached an average of 51.6 fps at 8K and even broke the 60 fps limit in places. Doom Eternal is a fast-paced and hectic shooter that looks awesome too. So it’s very impressive when the RTX 3090 reaches almost 60 fps at 8K at the highest graphics settings.

We tested the game during some hectic firefights and large open spaces, so the RTX 3090’s performance here looks very promising. The increase in performance compared to the Titan RTX is also impressive.

We also tried Doom Eternal on the lowest graphics settings. Unlike Red Dead Redemption 2, Doom Eternal still looks really good even at a low level, and this allowed the RTX 3090 to hit an average of 57.7 fps. A decent jump, but still just short of the 60 fps target. However, this is one of the tightest cases of the RTX 3090, which offers 8K at 60 fps – something the Titan RTX never achieved.

Gears 5 is one of the most graphically intense games released by Microsoft’s Xbox Games Studios. It outperformed the Titan RTX at 8 KB, with the GPU only managing 27.4 fps at medium settings.

However, the RTX 3090 absolutely smashed it, averaging an incredible 58.8 fps at Ultra settings. Sure, during some particularly severe firefights, with explosions and debris flying around, we saw break-ins into the low 50’s. This is still an incredible feat.

Even better, the RTX 3090 achieved a solid 60 fps during our tests by simply lowering the graphics settings to “High”. This means 8K at 60 fps is a reality, and you don’t have to compromise too much when it comes to graphical fidelity as the game still looks amazing.

We believe that with a little tweaking, you can have a mix of high and ultra settings and hit 60 fps. Impressive stuff.

One thing to note is that this is the only game that we didn’t test the exact same hardware as the Titan RTX. Still, these results provide a good idea of ​​how much better the RTX 3090 is at 8K gaming.

Death Stranding was one of the most impressive 8K experiences we’ve had with the Titan RTX when we tested it. While every graphics setting was pushed to the highest level, the Titan RTX struggled averaging 23.3 fps by turning on Nvidia’s DLSS technology, which uses the tensor cores of an RTX card to boost high-resolution performance thanks to AI and In machine learning, we found that with the Quality setting (and everything else set to maximum, as usual), performance increased to 29.9 fps, with a minimum of 25.7 fps and a maximum of 32 fps.

Even better is that when switching from DLSS to the “Performance” setting, the game averaged 39.8 fps at 8K and a maximum of 49 fps.

If we set the graphics to low but DLSS was enabled, we averaged 50.9 fps with the Titan RTX, and in some parts of our tests the card hit 57.2 fps, which is excruciating at 60 fps on the older card is close to 8 KB.

The improvements are immediately noticeable: The RTX 3090 achieves an average frame rate of 29.4 fps at the highest settings without DLSS. So this is pretty much an out of the box 8K experience. But let’s tinker.

First we switched DLSS to “power” and left everything else as it was. The results were dramatic, with an average frame rate of 55.7 fps and a maximum frame rate of 60.5 fps – another 8K game that fulfills the 60 fps dream.

Next we tried the DLSS setting ‘Ultra Performance’. This is the new setting added specifically for 8K resolution and the RTX 3090. The results are even better, with an average frame rate of 59.9 fps at the highest graphics settings. This is really impressive as you are playing a modern, graphically great game with a resolution of 8K and 60 fps.

Most importantly, this is the first time we’ve had the feeling of being able to play the entire game at 8K resolution instead of slamming it down to 4K for a more consistent experience.

Sure, with a lower resolution and a high refresh rate monitor, you can get frame rates much higher than 60 fps with RTX 3090 and Death Stranding, but keep in mind that 8K gaming monitors aren’t currently available there. The Dell UltraSharp UP3218K monitor we use is strictly a productivity monitor with a maximum refresh rate of 60 Hz.

Overall, with Death Stranding, Nvidia has really delivered on its promise of 8K games.

When it comes to 8K gaming, does the Nvidia RTX 3090 deliver? Exciting, yes, we’ve tried a lot of games so far. It shows a significant increase in performance in many games over the more expensive Titan RTX, and many games are now achieving the magical 8K @ 60fps experience we were looking for.

Not all games have achieved this, however, and many games have some huge sacrifices when it comes to graphical effects.

However, as Death Stranding proves, DLSS may be the real star of the show. This feature, enhanced with Nvidia’s new RTX 3000 series GPUs, makes a huge difference and allows you to play games at 8K and 60 fps without noticeably affecting graphical fidelity.

As DLSS evolves and more games take advantage of it, including upcoming blockbusters like Cyberpunk 2077, it looks like the 8K gaming future may finally be here with the RTX 3090. We’ll be testing the latest games at 8K as they become available.

These were the details of the news Nvidia RTX 3090 versus Nvidia RTX Titan: Battle of the 8K... for this day. We hope that we have succeeded by giving you the full details and information. To follow all our news, you can subscribe to the alerts system or to one of our different systems to provide you with all that is new.