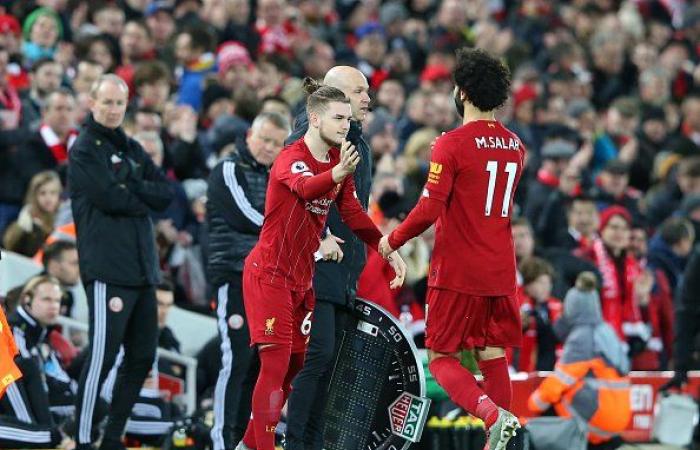 Liverpool youngster Harvey Elliott heaped praise on his Liverpool teammate, Mohamed Salah, saying that he looks up to him mainly due to the Egyptian’s work ethic.

Elliott joined Liverpool last summer as a 16-year-old from Fulham and hasn’t ceased to impress with the club’s youth teams and the first team.

His appearances with the Reds, mainly in the EFL Cup, made him an instant fan favorite as he’s shown a lot of promise and helped them reach the tournament’s quarter-finals.

The now 17-year-old usually plays on the right wing, same as Salah, explaining why he looks up to him as he’s one of the best players on the planet in his position.

When asked how he’d describe the Arab Contractors academy graduate, Elliott told Liverpoolfc.com: “King, I would say! Just because of his style of play and who he is on and off the pitch.

“Myself, looking at him in my position, I idolize him a lot.

“To be going up against him in training, I learn a lot of things from him. Even in the gym as well, he is telling me to do a higher weight, push myself even more.

“To have him in the club and around us young players, he is a really big influence,” he concluded.

Salah is arguably Liverpool’s best signing in the past three years as he helped them return to glory by lifting the UEFA Champions League, the UEFA Super Cup and the Club World Cup.

READ: El-Hadary reveals what Salah is missing to become Egypt’s best ever

They were also on the verge of lifting their first league title in over two decades before the Premier League was suspended due to coronavirus outbreak.

These were the details of the news Harvey Elliott reveals why he idolizes Mohamed Salah for this day. We hope that we have succeeded by giving you the full details and information. To follow all our news, you can subscribe to the alerts system or to one of our different systems to provide you with all that is new.