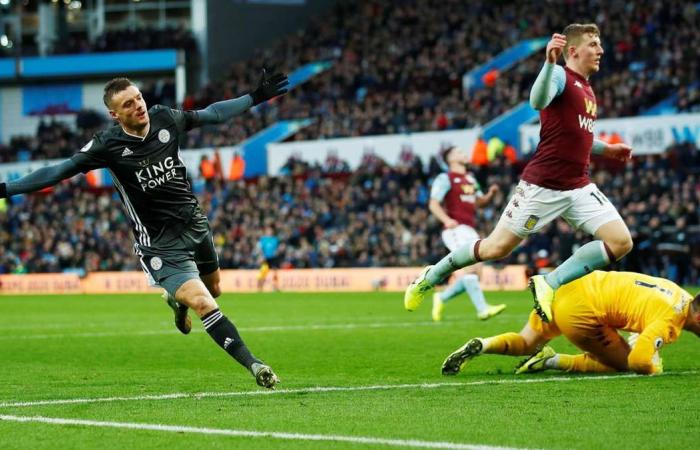 Hind Al Soulia - Riyadh - Leicester City have a record and, the way he is going, Jamie Vardy may break his own. An eighth consecutive top-flight win meant this City side beat both Leicester’s class of 1963, who had managed a club record seven, and Aston Villa while reducing the gap to Liverpool to eight points.

"It really does mean something special,” said manager Brendan Rodgers. “It puts the team in the history books of Leicester City and the performance warranted that.”

Vardy has scored in each of those victories and his Premier League record of 11 in a row, set four years ago, is now under genuine threat.

History threatens to repeat itself, in more ways than one. Aston Villa, who went down when Leicester won the league in 2016, must hope it does not.

Vardy’s double condemned them to a fifth defeat in seven games, albeit a run when they have encountered each of the top five, but while they fashioned enough chances, they conceded too many and defensive shortcomings threaten to be their undoing.

But for fine saves from Tom Heaton, to deny Caglar Soyuncu and Harvey Barnes, a derby defeat would have been still heavier. “We could have had one or two more goals,” Rodgers said. “We played with quality and hunger.”

He had much to savour. James Maddison was magnificent, creating two goals and almost scoring himself with two shots in the space of three minutes. Ricardo Pereira was also outstanding while Rodgers’ decision-making was flawless.

He benched his wingers, switched to a midfield diamond, gave Kelechi Iheanacho his first league start of his reign and reaped a reward for pairing two strikers with Leicester’s first-half goals.

Iheanacho got an assist and a goal as a substitute against Everton seven days earlier. He repeated the feat as a starter. First the Nigerian provided the defence-splitting through ball, Vardy skipped past Heaton, scuffed his shot but had the time to beat Ezri Konsa on the line and slot the ball into the unguarded net.

Then Iheanacho volleyed in at the near post for the second, meeting a cross from Maddison, who roamed intelligently from his position at the tip of the diamond.

They matched that with two second-half strikes. Jonny Evans’ looping header came from Maddison’s deep corner. Vardy took his tally to 16 goals in as many league games with a clinical finish from Dennis Praet’s ball over the top.

“Jamie’s a top-level player,” Rodgers said. “We scored all types of goals. We had two counter-attack goals, a possession goal and a set-piece goal.”

But Villa were far too open. Vardy’s opener had capped a doubly damaging three minutes for them. Tyrone Mings was substituted immediately afterwards.

“Tyrone goes down with a hamstring injury, he tells me he is OK and they score,” said manager Dean Smith after the centre-back proved unable to chase Vardy. His defensive problems could have got worse: Matt Targett was perhaps fortunate to only get a yellow card for a lunge at Pereira.

But Smith said: “We’ve had chances.” He could rue the 11th-minute opening when the recalled Anwar El Ghazi hit the bar from six yards. Their irrepressible captain Jack Grealish did score with a bobbling shot.

He and Smith are lifelong Villa fans and the club paid tribute to the late Ron Saunders, who led them to the 1981 league title and who built the 1982 European Cup-winning team.

Many of his former players were on the pitch beforehand as they remembered Saunders, who died on Saturday at 87. He also managed Birmingham and West Bromwich Albion but if a Midlands club upsets the odds to win the league this season, it will be Leicester.

These were the details of the news Leicester City enter the 'history books' after win at Aston Villa reduces gap to Liverpool back to eight points for this day. We hope that we have succeeded by giving you the full details and information. To follow all our news, you can subscribe to the alerts system or to one of our different systems to provide you with all that is new.