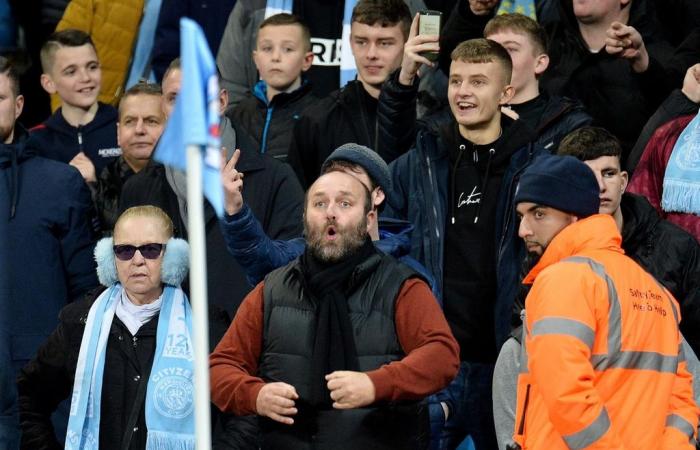 The Etihad Stadium hosted a thrilling match as United overcame their city rivals 2-1 thanks to goals from Marcus Rashford and Anthony Martial.

But the Manchester derby also saw disturbing scenes, with City confirming they were "aware of a video circulating on social media which appears to show a supporter making racial gestures".

The club are "working with Greater Manchester Police in order to help them identify any individuals concerned" after a supporter appeared to make a monkey gesture during a United attack in the second half. The police said no arrests had been made and enquires were ongoing.

United reported the incident to City and referee Anthony Taylor, with more than one of their players feeling they had abuse of a racist nature aimed at them.

There were also reports of missiles being thrown as tempers boiled over in the stands, with Fred appearing to be hit by an object hurled from the crowd as the visitors prepared to take a corner.

Manager Ole Gunnar Solskjaer said: "Fred and Jesse (Lingard) were in the corner, taking a corner, and I've seen the video, heard from the boys. We keep talking about it every week.

"But he's been caught on camera. He should, in my opinion, never be allowed into a football ground again and I've seen the video. Unacceptable. So I am sure that City and the authorities will deal with it.

"As I said, we keep talking about it every week and it doesn't stop unless it'll have consequences."

Asked about Fred's well-being, Solskjaer said: "It's affected both him and Jesse, of course. They're in the corner. You'll see the video if you want to but sometimes you feel sorry for these people.

"I am sure they'll feel sorry for them as well because it's an act of ignorance."

Commenting on Twitter post showing a video of the alleged incident, he wrote: "Not even this idiot can ruin tonight's feeling, shameful behaviour, it may be the derby but there is never ever a reason to be racist!"

Fred said the alleged incident showed "we are still in a backward society".

"On the field, I didn't see anything. I saw it only in the locker room afterwards," he said. "The guys showed me. He even threw a lighter and it hit me. I try not to care about that. I try to look ahead.

"Unfortunately, this is happening in some stadiums. It's sad, but we have to keep our heads up and forget about that. We can't give them any attention because that's all they want. I spoke to the referee after the match, they will do something about it and that's all.

"We are all the same regardless of skin colour, hair and gender. We came from the same place and we all go to the same place when it's all said and done. Thank God I have a lot of friends here in the locker room who hugged me, like Lingard. I don't want to think about it. I just want to move on."

Racism has become a frequent topic this season. England's players were subjected to monkey chants and Nazi salutes in a Euro 2020 qualifier away to Bulgaria in October, leading to a one-match UEFA stadium closure with a further game suspended during a two-year probationary period.

Asked whether similar sanctions should be meted out to City, Solskjaer responded: "Why don't we educate him instead? It's not City's fault, it's his - and that should be educated. That's my opinion, anyway. Nothing to do with Man City as a football club, no."

Sunday is the one-year anniversary of City's match at Chelsea, which led to one supporter being permanently banned from Stamford Bridge for the use of racially abusive language and threatening and aggressive behaviour towards Raheem Sterling.

The home side reacted swiftly to Saturday's alleged incident in the derby, making a statement 20 minutes after full-time.

City's statement read: "Manchester City FC are aware of a video circulating on social media which appears to show a supporter making racial gestures during the second half of the match against Manchester United this evening.

"Officials from the club are working with Greater Manchester Police in order to help them identify any individuals concerned and assist with their enquiries.

"The club are also working with GMP regarding an instance of objects being thrown onto the field of play.

"The club operates a zero tolerance policy regarding discrimination of any kind, and anyone found guilty of racial abuse will be banned from the club for life."

City boss Pep Guardiola backed the club's stance. "I think support the statement the club has done," he said. "So, hopefully we are going to solve it and hopefully avoid it again and it doesn't happen again.

"Of course, it is a battle to fight every day, so unfortunately it happens in many places and hopefully it cannot happen again."

Anti-discrimination group Kick It Out said it had been "inundated with reports of alleged racist abuse from a number of individuals" during the game.

These were the details of the news Ole Gunnar Solksjaer demands action after racist abuse at Manchester derby for this day. We hope that we have succeeded by giving you the full details and information. To follow all our news, you can subscribe to the alerts system or to one of our different systems to provide you with all that is new.