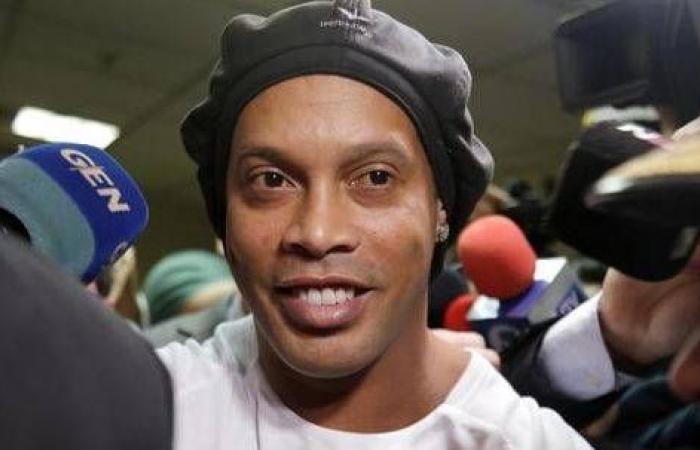 Ronaldinho's famous smile has "disappeared" after more than three weeks in a Paraguayan jail, according to one of the few people allowed to visit him.

The Brazilian football great and his brother, Roberto Assis, have been held in a prison near Asuncion since March 6 for using fake passports, reports Xinhua news agency.

Local authorities have banned visitors at the facility because of the coronavirus outbreak, however an exception was made for former Paraguay international forward Nelson Cuevas, who is a close friend of Ronaldinho.

"Ronaldinho is sad, he is not happy," the Globo newspaper quoted Cuevas as saying. "He is known for his smile, his good humour and carefree attitude. But his smile has disappeared."

Cuevas, who was capped 41 times for Paraguay's national team, said his "five or six-hour conversation" with Ronaldinho left him convinced that the 2002 World Cup winner was an unwitting victim of a plan involving "bad people".

"His brother knew (them). They put Ronaldinho in this scheme. He is innocent but he is now facing criminal charges for having used a false document."

Ronaldinho and Assis travelled to Paraguay on March 4 to participate in a children's charity event and promote a new book. The pair were arrested later that day when authorities realised they had entered the country with fake passports.

They have denied any wrongdoing and said they were presented with the documents as a "gift" upon arriving at Asuncion's international airport.

A judge has since refused the brothers' request for house arrest and ordered them to remain in jail pending the police investigation, citing a flight risk.

Ronaldinho, a two-time Ballon d'Or winner, retired from football in 2018 after a career that included spells at Gremio, Paris Saint-Germain, Barcelona, Milan and Atletico Mineiro, among other clubs.

These were the details of the news Ronaldinho's smile has 'disappeared' in Paraguayan prison for this day. We hope that we have succeeded by giving you the full details and information. To follow all our news, you can subscribe to the alerts system or to one of our different systems to provide you with all that is new.