'The cherry on the cake, the biggest I've been in' - Flamengo coach Jorge Jesus on the Club World Cup final against Liverpool 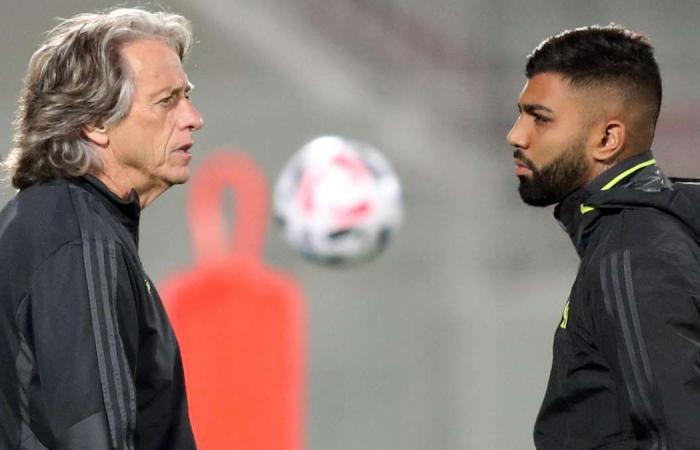 Thank you for your reading and interest in the news 'The cherry on the cake, the biggest I've been in' - Flamengo coach Jorge Jesus on the Club World Cup final against Liverpool and now with details

Hind Al Soulia - Riyadh - Jurgen Klopp's impact on Liverpool during four years in charge has been dramatic, but the coach in the opposing dugout in Saturday's Club World Cup final has needed just a few months to make history at Flamengo.

Jorge Jesus was only appointed by the Rio de Janeiro giants in June, the arrival of the white-haired 65-year-old Portuguese coach raising eyebrows in Brazil.

He immediately made his mark and in the last month has seen the country's best-supported side win the Copa Libertadores for just the second time and then claim a first Brazilian title in a decade, finishing 16 points clear.

Jesus has overseen just two defeats in 29 league games and his team are now one win away from lifting the Club World Cup after defeating Al-Hilal 3-1 in the semi-final.

Only Klopp's Liverpool stand between them and a first victory for South America in this competition since Corinthians beat Chelsea in 2012.

"This is the most important game of my career. It is the cherry on the cake of Flamengo's season, the biggest final I have been involved in," said Jesus.

His comments underline the importance of the occasion in South America, with the Club World Cup their one chance to compete with Europe's giants.

Interest in this competition is always muted in Europe, especially as it comes in the middle of the club season. Meanwhile, the number of Flamengo fans visible around Doha, decked out in red and black, confirms what this event means to them.

“We know Liverpool are totally the favourite, but we know in football that anything can happen and it’s possible to win. So we feel good, that we’re going to have chances," said full-back Filipe Luis in an exclusive interview with The National.

Jesus has taken them there, to their 74th and final game in 2019, having become a rare foreign coach to work in Brazil, never mind succeed. He was already a comparative veteran when his managerial career really took off upon joining Benfica in 2009.

Observers of Brazilian football have noticed the success he has enjoyed with a more typically intense, European approach, and that will give them reason to believe an upset could happen against Klopp's team.

"Of course with Jorge Jesus there is European influence but the players themselves are already quality," Klopp said. "If there was not a European coach it would already be difficult. Jorge Jesus is very, very experienced and was very successful in Portugal and now in Brazil as well, so we have a lot of respect for that."

Liverpool are hoping victory can give them renewed energy in their draining Premier League title push.

It has been quite a week for the Anfield club since they beat Watford 2-0 last Saturday and moved 10 points clear at the top of the table.

On Sunday they flew to Qatar before Monday's Champions League last-16 draw paired them with Atletico Madrid.

After a team of academy players lost 5-0 at Aston Villa in the League Cup on Tuesday, Klopp's senior side edged out Monterrey in the semi-final in Doha on Wednesday. Thursday brought confirmation of the signing of Japanese star Takumi Minamino from Red Bull Salzburg.

Now they are hoping to crown a fabulous year by winning this trophy for the first time, but the pressing issue for Klopp will be to see if Virgil van Dijk can return after illness.

With Fabinho, Dejan Lovren and Joel Matip already absent and Georginio Wijnaldum missing Wednesday's game too, the European champions have been down on strength.

The increasingly prominent Naby Keita could have a key role to play again, though, after scoring in the semi-final.

"He has scored a lot of goals for us already, important goals as well. It's absolutely brilliant how well he did that (against Monterrey) and there is so much more to come," said Klopp.

These were the details of the news 'The cherry on the cake, the biggest I've been in' - Flamengo coach Jorge Jesus on the Club World Cup final against Liverpool for this day. We hope that we have succeeded by giving you the full details and information. To follow all our news, you can subscribe to the alerts system or to one of our different systems to provide you with all that is new.