Summary and goals of the Preston match against Liverpool today in... 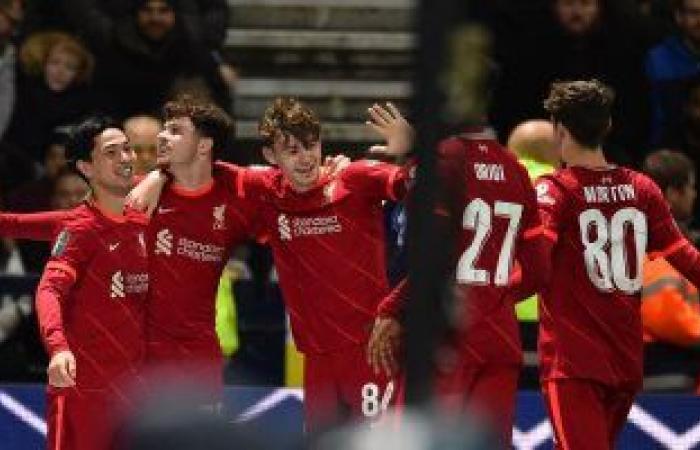 The Liverpool team qualified for the English League Cup quarter-finals, after defeating its host Preston North End, 2-0, in the match that brought the two teams together at Debdale Stadium, in the round of 16 competitions. And the presence of the Egyptian star, Mohamed Salah, was outside the list of the Liverpool team in the match tonight.

The most prominent imposition of the first half was in the 28th minute, when Liverpool goalkeeper Adrian saved a dangerous ball, after which the ball rebounded to the Preston strikers before defender Nico Williams removed it from the goal line in a wonderful way.

Liverpool’s most dangerous chance came in the 31st minute, through Chamberlain, who passed the ball on the edge of the penalty area, and shot powerfully, but the defender blocked the ball.

In the second half, Japan’s Takumi Minamino scored Liverpool’s first goal in the 62nd minute from Nico Williams, and Belgian Divock Origi added the second goal in the 84th minute with a great heel shot.

And the German coach, Jurgen Klopp, pushed the Liverpool team, with the formation of most of the substitutes, in order to rest his key players.

Mohamed Salah had led Liverpool to achieve a resounding victory over Manchester United, with five goals without return, last Sunday in the English Premier League, during which the pharaoh scored a hat-trick.

Liverpool entered the match with the following formation.

These were the details of the news Summary and goals of the Preston match against Liverpool today in... for this day. We hope that we have succeeded by giving you the full details and information. To follow all our news, you can subscribe to the alerts system or to one of our different systems to provide you with all that is new.