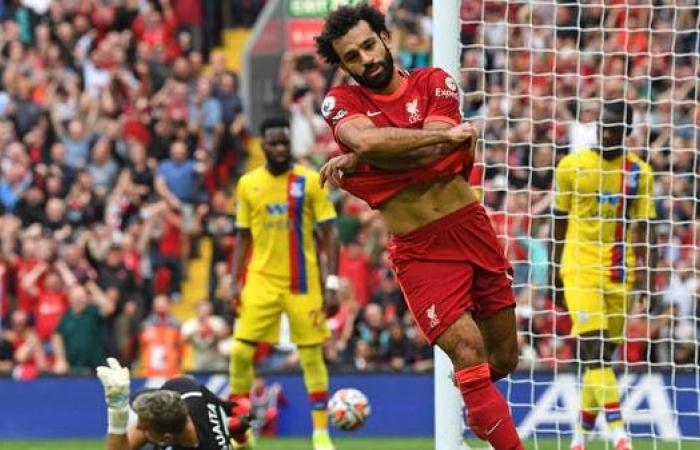 Mohamed Salah led his Liverpool team to the top of the English Premier League, after beating Crystal Palace 3-0 on Saturday in the fifth round of the competition.

This round also witnessed Manchester City’s 0-0 draw with Southampton, Arsenal’s 1–0 win over Burnley, 3–1 Watford over Norwich City, and Brentford over Wolverhampton 2–0.

Liverpool advanced with a goal scored by Sadio Mane in the 43rd minute from a follow-up to Salah’s header, who added the second goal in the 78th minute, and Naby Keita concluded Liverpool’s goals in the 89th minute. Liverpool raised its score to 13 points at the top of the standings, temporarily until the rest of the matches of this round ended, Crystal Palace’s balance stopped at five points in thirteenth place.

At Turf Moor, Arsenal beat Burnley with a clean goal. Arsenal owes this victory to Martin Odegaard, who scored the game’s only goal in the 30th minute. Arsenal raised its score to six points in twelfth place, and Burnley’s balance stopped at one point in the penultimate nineteenth place.

At the Millenio Stadium, Brentford beat Wolverhampton with two clean goals, scored by Evan Toni in the 28th minute from a penalty kick and Brian Mbiomo in the 34th minute. The match saw Brentford’s Chandon Baptiste sent off in the 64th minute. Brentford raised its score to eight points in ninth place, and Wolverhampton’s balance stopped Three points in sixteenth place.

At Carr and Rudd, Watford beat Norwich City 3-1. Emmanuel Denis scored Watford goals in the 17th minute and Ismail Sarr (two goals) in the 63rd and 82nd minutes, while Norwich City’s Timo Pukki scored in the 35th minute. Watford raised his score to six points in Tenth place, Norwich City remained without credit at the bottom of the standings.

These were the details of the news Liverpool crosses Crystal Palace .. City stumbles against Southampton for this day. We hope that we have succeeded by giving you the full details and information. To follow all our news, you can subscribe to the alerts system or to one of our different systems to provide you with all that is new.