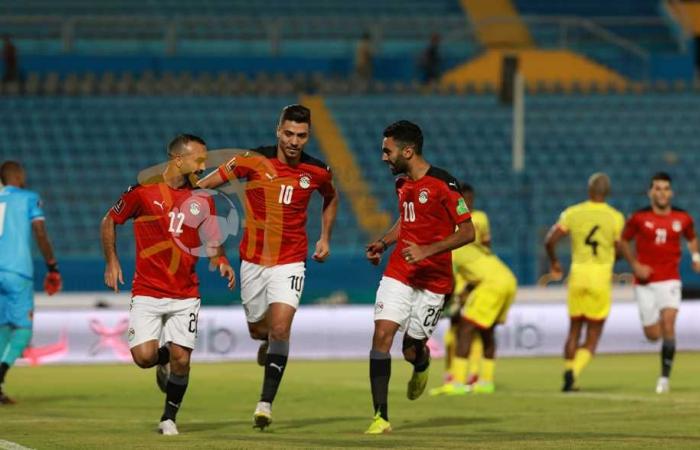 Egypt beat Angola 1-0 at the Air Defense Stadium, as part of the first round matches of Group F of the African qualifiers for the 2022 World Cup.

Mohamed Magdy “Afsha” scored the only goal of the match from a penalty kick in the fourth minute.

The victory raised Egypt’s balance to three points at the top of Group F standings with Libya, while Gabon’s balance froze at none of the points in the last place.

On the other hand, Ahmed Fattouh as a left back, and Mohamed Sharif in the attack.

Angola almost caught Egypt very early. A cross from Freddy Balende in the second minute to Vladimir Edison, who received the ball on the six yards border and hit the side of the post a little.

The Egyptian response was strong, and Ahmed Fattouh got a penalty kick in the third minute after being blocked by Inacio Santos.

Mohamed Magdy “Afsha” scored the penalty kick successfully, to score the first goal for the Pharaohs.

Egypt almost ended the meeting early in the sixth minute. A cross from Zizou, Hussein Al-Shahat met him with a touch by the side of the goal.

Angola responded in the seventh minute from a dangerous counter that reached Fabio Aero, who was alone in El-Shennawy’s goal, but he shot by the side of the goal.

Afsha sent a ground cross in the 14th minute that passed everyone, and reached Zizou, who shot directly, but the defense intervened in front of him at the last moment.

The dangerous Freddy Balende passed with skill from Ahmed Fattouh in the 17th minute and sent a cross that passed everyone, but Baher Al-Mohammadi took it out to a corner.

The Angolan pressure continued in the 24th minute after a mistake by Mahmoud Hamdi, “The Winch”, to cut the ball by Freddy and enter the penalty area and send a cross. Tariq Hamed returns and saves it at the last minute.

Freddy shot again in the 28th minute over the goal.

After a period of calm, Egypt almost scored again in the 44th minute after a link from Afsha to Mohamed Sharif, who penetrated and entered the penalty area and shot over the goal, ending the first half with the progress of the Pharaohs with a goal.

Egypt started the second half with another attack. A shot from Afsha hit the defense and changed direction, but it passed a little over the post to a corner.

Then the meeting calmed down early. Angola coach Pedro Gonzalez intervened with a first substitution in the 60th minute. Ari Babel participated in the Ismaili star instead of Joao Bachi.

Hossam Al-Badri intervened in the 67th minute, Abdullah Al-Saeed and Ramadan Sobhi participated in the place of Hussein Al-Shahat, and Ahmed Sayed “Zizou”.

Al Wensh threatened Angolas goal in the 75th minute with a header from Al-Saeed’s corner, but the goalkeeper steadily blocked it.

The 77th minute witnessed a substitution for Angola by entering Zito Luvombo in place of Vladimir Ederson.

Al-Badri responded in the same minute by entering Ayman Ashraf instead of Ahmed Fattouh.

Egypt posed the danger again in the last minutes. Longitudinal from Afsha to Mohamed Sherif in the 87th minute, who returned it to Al-Saeed, who shot weak in the hands of the goalkeeper.

Angola made its last substitutions in the 88th minute with the entry of Simone Eduardo instead of Inacio Santos.

Al-Badri made his last substitutions in the 91st minute, with Hamdi Fathi entering instead of Afsha, and the match ended with Egypt winning 1-0.

The victory raised Egypt’s balance to three points at the top of Group F standings with Libya, while Gabon’s balance froze at none of the points in the last place.

Egypt will play Gabon next Sunday in Libreville, the second round match, while Angola will meet Libya in Luanda.

These were the details of the news FilGoal | News | A successful kickoff .. Egypt... for this day. We hope that we have succeeded by giving you the full details and information. To follow all our news, you can subscribe to the alerts system or to one of our different systems to provide you with all that is new.