THW Kiel after handball drama in the Champions League final |... 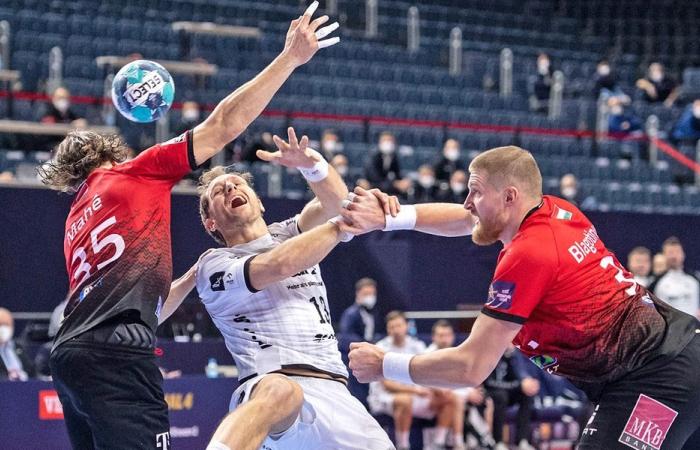 The “Zebras” will meet on Tuesday evening (8.30pm) against FC Barcelona, ​​who had prevailed in the first semi-final duel against Paris Saint-Germain with 37:32 (18:14). “I’m very proud of my team. We played against a strong opponent at the highest level today. The boys fought like lions,” said THW trainer Filip Jicha. And with a view to the final against “Barca”, the Czech declared: “We want to take everything we have.”

Kiel with furious first half

The Schleswig-Holsteiners showed an outstanding performance in their first Final Four participation since 2016 in the first section – probably by far the best in this series. The cover around the regular national team middle block Hendrik Pekeler / Patrick Wiencek acted very agile and focused. Again and again attacks by the Hungarians were prevented or so disturbed that the protégés of coach David Davis Camara had to complete from bad throwing positions. It is also strange, however, that Veszprem, despite various unsuccessful attempts, kept trying to achieve success via the center. It wasn’t until a few minutes before half-time that the Magyars began to use their wings more often.

At this point Camara had already taken two breaks. In view of the uninspired performance of the attack, that was urgently needed. Jicha pulled out the green card only once in the first section. The Czech had little or nothing to complain about until the final stages. Because the North Germans were convincing not only in defense, but also in attack. The record champions were particularly efficient in the second wave.

But the Bundesliga team also knew how to please in attacking positions, although captain Domagoj Duvnjak, who was still weakened after a coronavirus infection, was only sporadically on the plate before halftime.

Kiel throws out a seven-goal lead

From the bench, the exceptional Croatian player saw his teammates pull away to 17:10 in the 26th minute. Only then did the three-time premier class winner suffer a small period of weakness, so that the lead at the break was “only” five hits. Bitter for Kiel: Superstar Sander Sagosen received his second two-minute penalty a few seconds before going into the dressing room and, like left wing Rune Dahmke, who was already on the bench for the same reason at that time, had to watch at the beginning of the second round.

The Schleswig-Holsteiners survived the outnumbered phase after the break. The cover was still stable, but the Jicha protégés found it much, much more difficult in possession of the ball. The lead melted down to 22:20, which prompted Kiel’s coach to take a break (40th). But the performance of the THW professionals was even weaker afterwards. First Veszprem equalized through Vuko Borozan (46th), shortly afterwards the Hungarians were even in the front with 28:24 (50th).

Jicha took out the green card again. “Sh … on it. We are able to turn that around. I need a team performance now,” said the former world-class player.

And Jicha got what he asked for. Outnumbered – Rogerio Moraes Ferreira hummed a two-minute penalty – the THW shortened to 27:28 (53rd). Shortly afterwards, Sagosen equalized (54th), before the Norwegian even threw the North Germans back in the front with 29:28 (55th). Kiel had the ball, but missed the possible 30:28 with one player more. On the other side, Yahia Khaled Omar was successful at 29:29 (58th).

Bitter for Kiel: Seconds before the end of the day, Veszprems keeper Rodrigo Corrales Rodal threw the ball away in front of a referee and took the THW, who would have had a throw-in, the chance to a final conclusion. According to the rules, there should have been a red card for the goalkeeper and a seven-meter for THW. But the referees Andreu Marin and Ignacio Garcia Serradilla (Spain) did not sanction their compatriot’s action at all. So it went into overtime.

Wiencek flies from the field – Ekberg makes the decision

And in this the game masters made another negative appearance. The THW suffered again, especially Wiencek. Because the cyclist saw the red card for an alleged foul on Gasper Marguc (64th). A blatantly wrong decision, as the television pictures that the referees also watched (!) Clearly showed that Marguc Wiencek had stepped on his foot and therefore lost his balance.

Kiel was not discouraged – neither by the referees nor by the opponent. Niclas Ekberg made the decision with his seventh goal (70th). Shortly afterwards, the rest was unlimited THW cheers.

Barcelona flex their muscles against Paris

In the first semi-final, Barcelona had impressively underpinned their role as tournament favorites against PSG. In the 22nd Champions League victory of the Catalans in a row, Dika Mem stood out with eight goals against his French compatriots. However, the former Kiel middle man Aron Palmarsson and keeper Kevin Möller also played a major role in the success. The Dane, who is returning to SG Flensburg-Handewitt next summer, parried six free throws in the first section alone.

Nahi is the best shooter for a weakened PSG

Paris fought bravely until the end, but ultimately had no chance due to a few corona-related failures and the absence of three-time world handball player Nikola Karabatic (cruciate ligament tear). Bitter for the French: For a short time Luc Steins, who had been signed up for the former Kiel backcourt player, was also canceled because of a positive test for SARS-CoV-2. In Karabatic and the Dutchman, coach Raul Gonzalez Gutierrez broke his central axis.

The most successful shooter for PSG was left winger Dylan Nahi with nine goals. World and European champion and Olympic champion Mikkel Hansen scored seven goals. The Dane must continue to wait for his first premier class triumph – at least until next year.

The handball record champions clearly win the duel with the Mannheimers. An “emergency solution” trumps in the top game. more

Seven players, including the Kiel Wiencek, Pekeler and Weinhold, had previously canceled their participation in the tournament in Egypt. more

These were the details of the news THW Kiel after handball drama in the Champions League final |... for this day. We hope that we have succeeded by giving you the full details and information. To follow all our news, you can subscribe to the alerts system or to one of our different systems to provide you with all that is new.