It was in Russell’s PowerPoint presentation for Mercedes 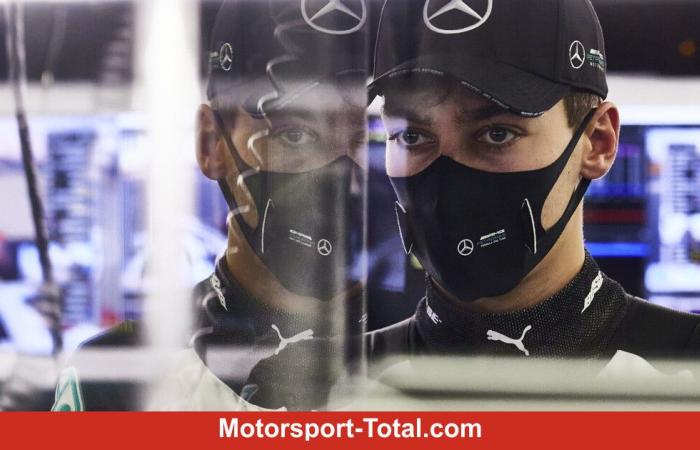 While we are talking about suffering Finns, we also have to briefly talk about this scene in the video. Kimi Raikkonen has already looked better, you have to honestly say. How does the “Iceman” explain the spin in the first lap?

“I got off to a good start, but at the exit of turn 2 I got too much on the curb and turned. That didn’t matter for the final result.” Overall, of course, he is not satisfied with 14th place. “Most of the time in the race we just didn’t have any pace. The first five or six laps on the fresh tires were good, but after that we fell like crazy.”

There has already been wild speculation on social media today because Valtteri Bottas has apparently changed his description on his Instagram channel and deleted the link to Mercedes. Many observers already see this as a sign that there is a crisis between the Finn and the top team.

In fact, Bottas has taken a lot of criticism for his performance lately, including from team boss Toto Wolff. Still, we don’t want to drift too much into conspiracy theories. The fact is: Bottas has a contract for 2021.

Video analysis: “That was really a big number!”

Talking about new stars and fuck-ups – our latest analysis video with my colleagues Christian Nimmervoll and Stefan Ehlen is about that. They rework the big emotions and little stories of the Sachir Grand Prix, you can’t miss that.

The columns on the Sachir race:

A star is born: will George Russell drive for Mercedes in 2021? There is a lot to talk about after the Sachir Grand Prix in Bahrain … #Last night More Formula 1 videos

Video: The repetition of the Mercedes breakdown

And yes, we have to talk about that again briefly. It was probably one of the biggest mishaps that happened to the Mercedes team. A “colossal fuck-up”, as Toto Wolff so aptly put it. For George Russell, the pit stop mishap meant that he was robbed of the lead.

“Of course it was very emotional,” explains Wolff about the minutes after the race. “If you drive your first race in a Mercedes, and you should actually win it and drive a monumental race, then you can’t say much. But it won’t be your last chance to win a race,” the team boss is convinced. This was the beginning of a fairy tale, a “new star” was born, so Wolff.

How the pit stop drama came about:

– Shovlin: Pit crew made no mistake

This is how Russell introduced himself to Mercedes

We start the day with a story that illustrates very well how much George Russell planned his career from a young age. Toto Wolff told Sky yesterday how the Brit introduced himself to him at the tender age of 15. “He came to my office and announced himself by email.”

Russell showed up at Wolff’s in a black suit with a black tie. “Must have been his communion suit, because it was pretty tight,” smiles the Austrian. And of course Russell had prepared a PowerPoint presentation – his trademark. “That was really done tip-top.”

What was in the presentation? “First there was his résumé, his various experiences. Then one side was ‘My strengths’, another side was ‘My weaknesses’, and then one side was how he wants to continue working on his weaknesses and how he wants to develop his strengths. ” And finally, a career plan on how he would like to get into Formula 1 and ultimately drive for Mercedes. Seven years later, the plan worked.

Welcome to the Formula 1 live ticker this Tuesday. It’s hard to believe, but we are in the last race week of the year! We want to make the most of that again. Maria Reyer welcomes you today. We’re about to start …

These were the details of the news It was in Russell’s PowerPoint presentation for Mercedes for this day. We hope that we have succeeded by giving you the full details and information. To follow all our news, you can subscribe to the alerts system or to one of our different systems to provide you with all that is new.