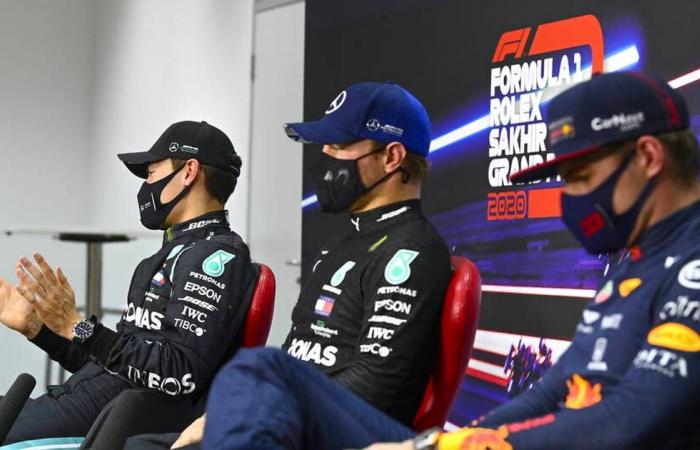 Dominator Lewis Hamilton is absent due to corona disease – this is the chance for the rest of the field to win the Sakhir Grand Prix.

The best starting position after qualifying has Hamilton’s long-time team-mate Valtteri Bottas, who is starting the race from pole after a historically fast lap.

However, George Russell, who replaced Hamilton, was only 26 thousandths of a second slower than the Finn. If the actual Williams driver wins, that would be a bang and a clear indication that a Mercedes cockpit is safe for him in the future. (SERVICE: Formula 1 drivers’ championship)

Wolff warns of Verstappen in the Red Bull

Without Hamilton, who dominated the previous week, Red Bull driver Max Verstappen had the great hope of finally winning again. In qualifying, however, he had to line up behind the two Mercedes.

Unlike the two Silver Arrows, the Dutchman will start the race on soft tires, which should give him advantages at the start of the race. Mercedes Motorsport Director Toto Wolff therefore warns of the Red Bull driver, who also looks strong on long runs in training. (The voices for F1 qualifying)

Verstappen himself puts the brakes on euphoria: “Our long runs in training were also good a week ago – but we still couldn’t keep up in the race. Let’s see how things go this time when we drive on a different track variant.”

Leclerc stacks deep – Vettel has to catch up

No one at Ferrari has to worry about victory, but Charles Leclerc achieved at least one fourth place on the grid with a strong performance in qualifying. (SERVICE: Formula 1 constructors’ championship)

The Monegasse stacks low for the race: “I think we won’t be as competitive as we are today, because I don’t think we have the fourth fastest car in the field. But we will give everything to achieve the best possible result.”

His teammate Sebastian Vettel would be happy if he could take a few points. The four-time world champion only finished 13th after a very short engine change before qualifying and has to catch up in the race.

“The race will be about smart tire management and about who is best able to handle the heavy traffic,” predicts Vettel. Due to the very short lap, there could be a lot of laps, which is why quite a few predict a chaotic race.

This is how you can follow the Formula 1 race in Sakhir LIVE:

These were the details of the news Sakhir Grand Prix with Vettel LIVE on TV, stream, ticker for this day. We hope that we have succeeded by giving you the full details and information. To follow all our news, you can subscribe to the alerts system or to one of our different systems to provide you with all that is new.