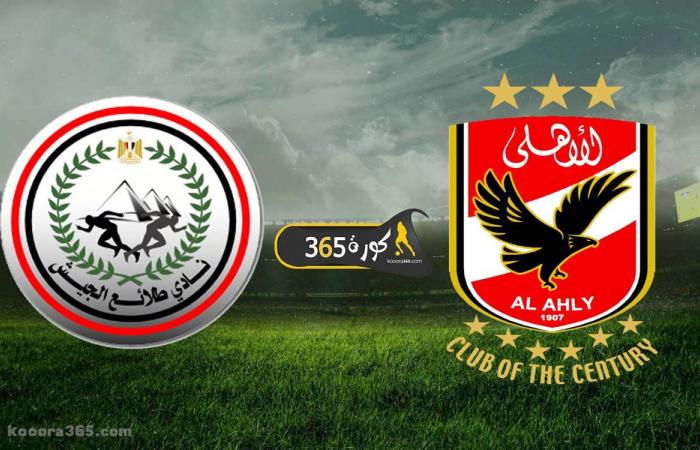 Egyptian football fans are waiting for a high-caliber match between Al-Ahly and Al-Jaish, this evening, Saturday, December 5, at Burj Al-Arab Stadium in the 2019/2020 Egypt Cup Final.

Kora 365 offers a service to watch the Al-Ahly and Al-Jaysh match, broadcast live today, which is scheduled to start at 8:00 pm Egypt time, that is, 9:00 pm Mecca time, and will be broadcast on the air exclusively on Ontime Sport HD1 with an audio performance by commentator Bilal Allam.

The Red Devils will face Al-Jaysh team in the final of the cup for the first time in the history of the two teams, as they did not have the opportunity to meet in the final match, but rather they met in the quarter-finals of the cup in 2007 and Al-Ahly outperformed by three for a goal.

The Red Team is striving with full force and ferocity in today’s meeting in order to achieve the triple this season, which will be exceptional for the Red Genie, as it has previously achieved the Egyptian League title and the African Champions League and this is all from the 2019/2020 season, which is considered the longest in years due to the Corona virus that struck the world and stopped sport activities.

The Red Castle team is going through its best conditions and the team is full of stars, and is armed with very high spirits after crowning the African title absent from its treasuries for 7 years, and today wants to return the cup again to the island where it has not returned since 2017, and won the 37th title in its history.

Al-Ahly will be absent in today’s meeting, team star Walid Silman, midfielder Aliou Diang, Ahmed Ramadan Beckham and Ahmed Yasser Rayan due to their infection with the Corona virus, in addition to Junior Ajay, who was infected in the previous Al-Ittihad meeting.

It is expected that the meeting will witness the participation of new faces such as Moroccan Badr Bannon or those returning from loan playmaker Nasser Maher, striker Mohamed Sharif, Akram Tawfiq and Salah Mohsen, but this will be according to the vision of the technical director of the team Betso Mosimani.

In the same context, Al-Jaysh’s vanguard in the championship was not as easy as Al-Ahly, so the cup was opened by a meeting with Dekernes, who outperformed him with a clean goal in the role of 32, while in the round of 16 he clashed with the clearing Egypt and successfully crossed with one goal as well, and in the quarter-finals Pyramids took out a penalty shootout Three goals for a goal after the end of the original and extra time with a goalless draw, and these results are with the former coach Abdel Hamid Bassiouni.

And in the semi-final round with the new coach, Tariq Al-Ashry, Zamalek, the champion of the cup last season, eliminated by three goals to reach the final match, and the army enters the meeting with high spirits and high focus, as it wants to present a strong match worthy of it and wants to win in order to ascend the podiums for the first time In the history of the team.

Al-Ashry is betting in today’s meeting on the experiences of his players to topple Al-Ahmar, for example Amr Gamal and the distinguished goalkeeper Mohamed Bassam, who hopes to shine again and have the word tonight, and also depends in the attack on Ahmed Samir, who shone in front of Zamalek and scored two goals, in addition to Muhannad Lashin and Nasser Mansi, the team’s stars. .

These were the details of the news Live broadcast | Watch the match Al-Ahly and Tale’aa Al-Jaish... for this day. We hope that we have succeeded by giving you the full details and information. To follow all our news, you can subscribe to the alerts system or to one of our different systems to provide you with all that is new.