Trezeguet participates and is injured .. Aston Villa falls in front... 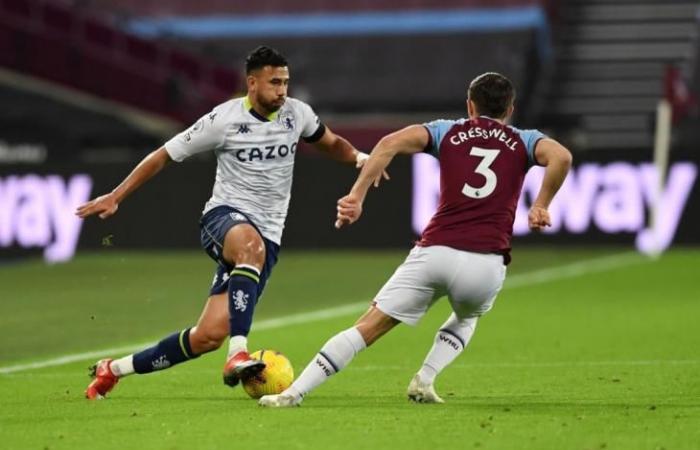 The English club Aston Villa fell to West Ham United, with two goals to one, in the tenth round of the Premier League.

West Ham defender Angelo Ogbonna opened the game’s goals in the second minute of the match, and Jack Grillish leveled the score in the 25th minute, before Jarrod Bowen scored the winning goal for West Ham in the 46th minute.

Egyptian star Mahmoud Hassan “Trezeguet” participated in the match since its inception, and came out as a substitute in the 74th minute of the match, after suffering a bloody injury.

Trezeguet awarded his team a penalty in the 73rd minute, and Oli Watkins, the team’s striker, wasted it.

Video technology canceled a goal for Ole Watkins in the 90 + 3 minute, after the match referee confirmed that the striker had been offside.

West Ham opened the scoring early, when the team defender Ojbona crossed from a corner kick, with a powerful header that hit goalkeeper Martinez in the second minute of the match.

Trezeguet fired a powerful shot from inside the penalty area, but it hit the foot of a West Ham defender and turned off the field.

Grillish received the ball from the middle of the field and launched the ball on the edge of the penalty area, then hit a powerful ball that landed in the right corner of the goal to tie to Aston Villa in the 25th minute of the match.

Aston Villa almost scored the second goal after short passes between Aston Villa players on the edge of the penalty area and eventually reached Watkins inside the penalty area, but the ball passed by the left post outside the field.

With the start of the second half of the match, West Ham snatched a goal, after Saeed bin Rahma passed a cross that Bowen headed into the Aston Villa net in the 46th minute.

Ole Watkins sent a wonderful pass to Trezeguet in front of the goal while he was empty, but Trezeguet easily hit the ball in the hand of goalkeeper Fabianski in the 62nd minute of the match.

The referee awarded a penalty kick for Trezeguet after a mistake by West Ham defender Declan Rice in the 75th minute of the match.

During the fall of Trezeguet after Rice interfered on him, the Egyptian player collided in the defender’s foot, and Trezeguet sustained a bloody injury to his head.

Aston Villa striker Ole Watkins took the penalty kick, but failed to score the equalizer, after the ball hit the upper bar and West Ham’s defense succeeded in dispersing the ball away from the penalty area.

The video technology canceled a goal for Ole Watkins in the 90 + 3 minute, after the match referee confirmed that the striker was offside.

These were the details of the news Trezeguet participates and is injured .. Aston Villa falls in front... for this day. We hope that we have succeeded by giving you the full details and information. To follow all our news, you can subscribe to the alerts system or to one of our different systems to provide you with all that is new.