Spectacle or embarrassment? Tyson and Jones junior back in the... 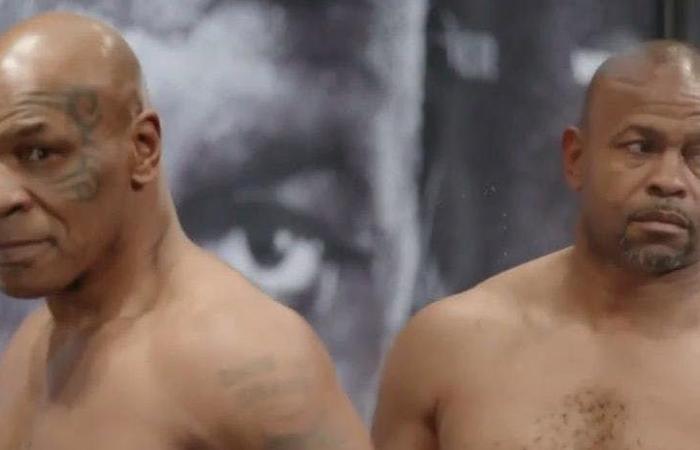 Boy fight of the legends: Tyson and Jones junior back in the ring

Mike Tyson has one of the toughest punches in boxing history. Roy Jones junior is one of the best there has ever been. Now both fight against each other for the first time – but are beyond the 50th knockout, the boxing grandpas are actually not allowed to beat each other.

Mike Tyson has one of the toughest punches in boxing history. Roy Jones junior is one of the best there has ever been. Now both fight against each other for the first time – but are beyond the 50th knockout, the boxing grandpas are actually not allowed to beat each other.

Together they are 105 years old – and two of the best boxers in the history of their sport. The two former world champions Mike Tyson (54) and Roy Jones junior (51) will fight against each other for the first time in their lives on Saturday (local time) in Los Angeles. And especially Tyson is not holding back 15 years after his last appearance in the ring before his comeback. “I like to lose here and there in life, but not in the ring on November 28,” he last said on his Instagram channel. He will knock out his opponent, who is three years his junior.

How seriously one can take this announcement and the whole evening, in which a former NBA basketball player competes against a Youtube star in the opening act in the empty Staples Center without spectators is questionable. Because in principle, neither Tyson nor Jones junior are allowed to hit it right.

In addition to the eight rounds shortened to two minutes, thicker and heavier gloves and the age of the two former top athletes, a requirement of the California State Athletic Commission (CSAC) acts like a stop sign even before the first round: According to consistent US media reports, both boxers are forbidden to knock out the other. If a boxer suffers a laceration or other injury, the fight will be stopped, the broadcaster quoted CBS CSAC managing director Andy Foster, who wants to see a “hard sparring”.

There are no official judges, but the WBC has named three former fighters who are to determine an unofficial winner of the show fight. The person then also symbolically gets a belt.

How do you get “Iron Mike” Tyson, who once bit off part of Evander Holyfield’s ear out of anger, to remain reserved in the heat of a fight? This is probably also wondering Jones, whom many experts saw as the technically better boxer at his best. “Who gets in the ring with Mike Tyson and thinks it’s just a show?” Jones Jr. asked last. As is so often the case, the old Tyson sentence goes well with this: “Everyone has a plan until they get hit in the face.”

In the nineties, when both boxers were in top form, many fans wanted this duel. Jones has got 47 of his 66 wins by knockout in his career and won world champion belts from middleweight to heavyweight. Tyson won the heavyweight world title in 1986 at the age of 20, making him younger than anyone before him. Its clout is still legendary. However, the biggest fights in his career were all defeats. Against Holyfield he lost twice. After that he was noticed with problems in his private life and his role in the movie Hangover.

However, the photos and videos of Tyson training that have been circulating for months show that at 54 he looks more fit and healthy than he has for years. The excess weight is completely off, the upper arms are scary at the mere sight. Jones junior now wants to find out for himself how it all works in the ring: “I’m not interested in the money. I want to know what it feels like to face the great Mike Tyson. “

These were the details of the news Spectacle or embarrassment? Tyson and Jones junior back in the... for this day. We hope that we have succeeded by giving you the full details and information. To follow all our news, you can subscribe to the alerts system or to one of our different systems to provide you with all that is new.