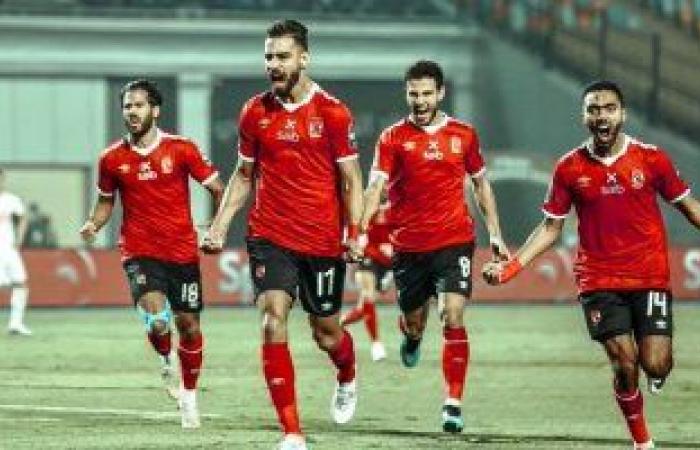 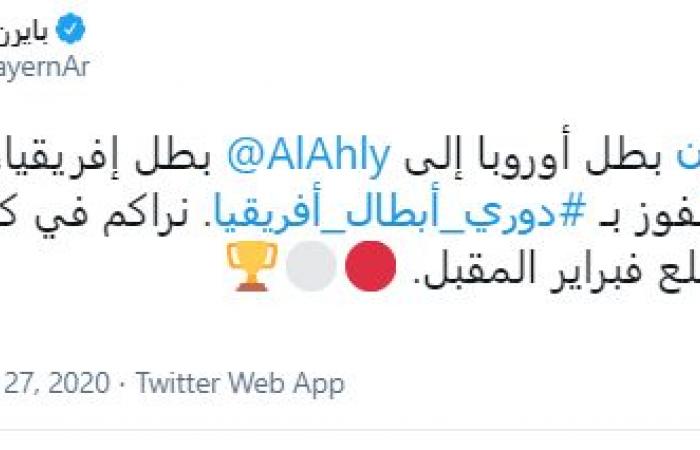 Bayern Munich congratulated the Al-Ahly club after being crowned champion of the 2020 African Champions League for the ninth time in its history, after beating Zamalek with two goals to one, in the match that brought them together in Cairo Stadium.

Bayern Munich wrote, through his Twitter account: “From Bayern, European champion, to Al-Ahly, African champion, congratulations to you on winning the African Champions League. We see you in the Club World Cup early next February.”

An enthusiastic start on the part of Al-Ahly, who pressed early before Zamalek was activated as the other, and each team resorted to the parties as their striking force, and the sixth minute witnessed an Ahlawi goal by Amr Al-Sulayyah after better dealing with a corner kick that he shot on Maaloul..

After the goal, the performance of Zamalek gradually became active through the moves of Bin Sharqi and Zizou, but Al-Ahly’s defense held together and Yasser Ibrahim entered into a joint ball with a check before the clash between Qafsha was imminent..

In the 31st minute, Shikabala completely dodged Al-Ahly’s defense amid “Tohan” from Al-Ahly’s defense and hit the ball in Al-Shennawi’s net. Al-Ahly continued its strange retreat, which gave Zamalek the opportunity to form a successive danger from the white, who reached out to his players and toured the field. .

Al-Ahly tried to possess the ball, but to no avail, after the focus and collective absence of the team’s performance, which gave preference to the white, who threatened Al-Shinawi’s goal more than once before the first half ended with a goal-to-score draw..

The start of the second half came with enthusiasm on the part of Zamalek, who dominated the first half of the 15th minute, and Al-Abyadh pressed all his lines on Al-Shennawi’s goal, and the 50th minute saw a dangerous opportunity for Al-Ahly, where Mostafa Mohamed hit a strong ball that El-Shenawi blocked. Kasongo took part instead of a check for the latter’s injury.

Al-Shahat wasted an opportunity to score an investigator goal in the 55th minute after he received a ball from Maaloul and shot it by Al-Shahat, but the post had sympathy with Zamalek and saved it..

Once again the post dangles to save a goal, but this time from Zamalek, after Zizou hit a powerful ball, then Ajay went out to hit the injury and took part in the place of Geraldo in the 67th minute..

Amr Al-Sulaia won a yellow card in the 73rd minute for roughing with Ahmed Sayed Zizou, and Qafsha set Al-Ahly’s goal in the 86th minute, after which Zamalek tried to return to the match and Ramy Rabia participated instead of Qafsha.

Kahraba participated in place of Marwan Mohsen, and the last minutes witnessed a continuous attack from Zamalek, but the match ended with Al-Ahly winning and winning the championship.

These were the details of the news Bayern Munich to Al-Ahly: Congratulations on winning and see you in... for this day. We hope that we have succeeded by giving you the full details and information. To follow all our news, you can subscribe to the alerts system or to one of our different systems to provide you with all that is new.