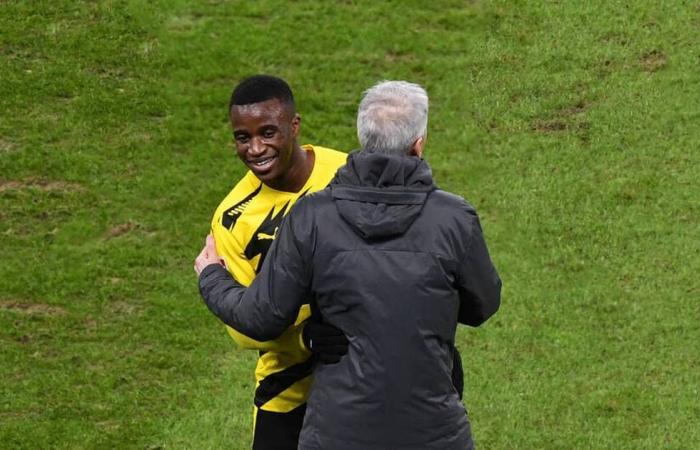 After the 5-2 victory at Hertha BSC, Borussia Dortmund wants to add to the Champions League.

The opponent is Club Bruges on Tuesday evening – BVB won the first leg 3-0 in Belgium. (Borussia Dortmund – Club Brugge on Tuesday from 9 p.m. in LIVETICKER)

The starting position in Group F is good for Borussia, the 1: 3 opening defeat at Lazio Roma were able to correct the black and yellow with the victories against Zenit St. Petersburg and Bruges. With another three, the door to the round of 16 would have opened wide.

But with which staff does BVB coach Lucien Favre want to approach this goal and will Youssoufa Moukoko be registered for the premier class after his debut in the Bundesliga? At the press conference on Monday afternoon, the Swiss gave information about this, among other things. His compatriot Manuel Akanji also answered journalists’ questions.

The PK for reading:

Favre and Akanji say goodbye. The PC is over.

“We didn’t start well, but we made a good recovery. We have an important game now and a win would put us in a good position.”

Favre on SPORT1– Inquiry, as he rated Jadon Sancho, who was given a break in Berlin: “We have decided on the freshness. We will continue to rotate, that is necessary because I don’t see any players who play ten games in 30 days. We have many opportunities up front and we will keep rotating. “

“We won 3-0 in the first leg but we also analyzed the game. They were very dangerous and we have to prepare well. Bruges have a very good team.”

“I can do my part, but performance is always dependent on the team. We are doing well at the moment and my performance is going well on the pitch and I want to keep it that way. I feel very comfortable in all systems and I do can adapt to me. “

Favre: “We’ll see in practice today. We have a lot of opportunities up front.”

Press spokesman Sascha Fligge: “In theory, it is not a problem to nominate him on the replacement list. In practice, the coach decides.”

Favre: “It is very important that we started the crucial phase with a win. All games are and will be difficult. We have to go on.”

Akanji: “It was really a very important win, especially after the international break. We can now take the momentum with us.”

At Hertha, Moukoko made his debut in the Bundesliga – at the age of 16 and one day. Now it will be exciting to hear whether the child prodigy is also planned for the Champions League.

These were the details of the news BVB press conference with Favre and Akanji in front of Bruges in the ticker for reading for this day. We hope that we have succeeded by giving you the full details and information. To follow all our news, you can subscribe to the alerts system or to one of our different systems to provide you with all that is new.