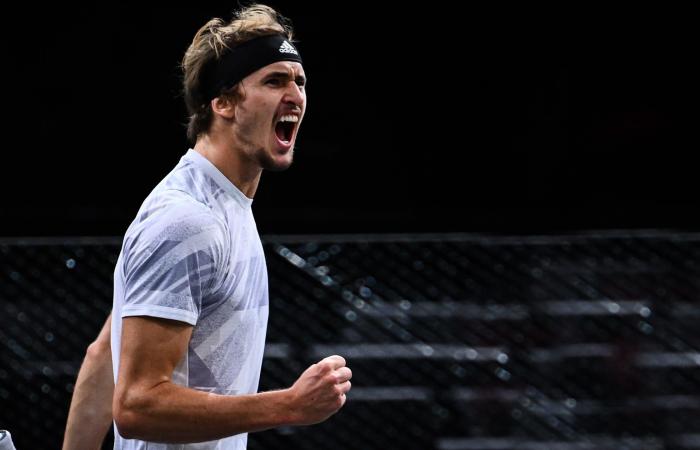 The second day of competition at the ATP Finals in London is on the program. Two singles and two doubles are played daily in the o2 arena.

For Alexander Zverev, his first game in the preliminary round is straight to the point. The 23-year-old will face Russian Daniil Medvedev in the “London 2020” group, against whom he lost the Paris-Bercy final last week.

World number one Novak Djokovic started on Monday in the individual competition. The five-time finals winner triumphed over the French Open semi-finalist Diego Schwartzman 6: 3, 6: 2. Click here for the article.

Here we report in the live ticker from what is happening in London.

All games and results:

After the sovereign victory against Schwartzman, Djokovic initially took the lead in the group “Tokyo 1970”. The second game of the first group takes place in the evening from 9 p.m. Then Alexander Zverev starts off with Daniil Medvedev, against whom he lost in three sets in the final of the Masters in Paris-Bercy. Now the German has a direct chance to take revenge. The live ticker from Eurosport.de reports back on time for the match.

Then it’s done. Novak Djokovic wins the start of the ATP Finals 6: 3, 6: 2 against Diego Schwartzman. After a somewhat stuttering start, Djokovic found his way into the game and showed a convincing performance in the second set.

Djokovic does it very confidently. With service winners, Djokovic gets three match balls, of which he leaves the first one with a double fault. With the second, Schwartzman plays a ball on the line. Try three then sits. Djokovic ends the game with a volley.

Djokovic does not show any nakedness when serving. The Serb continues to serve well and gradually works off the points. Schwartzman already has to serve against the loss of the match and no longer necessarily looks as if he still believes in the turnaround. Djokovic is still postponing the decision because he puts a backhand into the net. Nevertheless, he now has the chance to close the sack on his own serve.

Schwartzman realized that he had to take more risk to have a chance. He tries to be more active on the balls, but Djokovic almost always has a counterattack ready. In addition, the Serb can rely on his serve today and is already at five aces. So Schwartzman doesn’t really get anywhere near a break. Djokovic also puts pressure on when the Argentine serves. Especially on the second serve, Djokovic can take control of the rally and gets a break ball. Then Schwartzman messes up with the forehand and almost has to believe in a small miracle if he wants to turn this game.

Djokovic is now clearly dictating what will happen. The Serb now has more free points than at the beginning because he makes very good use of the width of the pitch. With a forehand winner against the direction of travel and an ace, he confirms the break. Schwartzman often only runs after his own serve and can hardly be active himself. At 15:15, Schwartzman is lucky that Djokovic misses a longline forehand. As a result and with his first ace, he can shorten to 1: 2.

Schwartzman has to fight for his service game right at the beginning of the second set. Because Djokovic plays tactically clever and keeps Schwartzman on the defensive with placed strokes, he has breakball again. The Serb lures Schwartzman to the net, over-praises him and then hits the break with a smack ball.

Djokovic gets a great 28-stroke rally and thus a 0:30. But Schwartzman initially counters, among other things, with clever attacking play and makes the following three points. After two mistakes, Djokovic has breakball. Schwartzman tries a net attack and is very lucky when Djokovic’s pass flies off the edge of the net. In the second attempt, the Djoker then gets the break with a forehand winner and serves to win the set. The Serb wins the important long rallies, but Schwartzman holds against it with great tennis. When a forehand of the little Argentine just goes out, Djokovic has set ball and uses it with a service winner. After 41 minutes, the first set goes 6: 3 to Djokovic.

Schwartzman works a lot for his points and moves Djokovic all over the place, but he still digs up almost all the balls. In addition, Schwartzman only brings about half of the first serves into the field and thus can only gain a few advantages. Nevertheless, the Argentine initially equalizes. After a failed stop by Djokovic, things get precarious again at 15:30, but Djoker defuses the situation again with a volley stop and closes the game with a forehand winner.

But Schwartzman also messes up now. The Argentine leaves the serve, there are only a few first and after a double fault Djokovic has two breakballs at 15:40. He forgives the first one, but then the Serbian gets the break back. It is noticeable that Djokovic Schwartzman often tries to hold in the backhand corner in order to use the space on the free forehand side at the right moment. The Serb’s brief slack seems to have been overcome and so he secures the lead again without losing points.

Schwartzman also secured his first service game without major difficulties. The Argentine is the somewhat more active player in the early stages, while Djokovic first gets a bit of security and shies away from the risk. Two too wide back hands of the Serbs bring the balance before he serves again himself. But here too he makes a few mistakes and is faced with the first critical situation when it is 0:30 after a double error. After another mistake, Schwartzman has two breakballs, of which he uses the second. An early break for the Argentine.

Djokovic opens the match and comes perfectly into the game. At zero he secures his service game by serving two aces at the end.

The players are ready to hit, then the tournament starts for them. Djokovic is certainly the favorite in this game, but the aspiring Schwartzman should not be underestimated. The Argentine is playing his best season by far and has already proven that he can keep up with the big players.

Djokovic is not the big favorite for the tournament either, although it is already clear that the Serb will end the year as number one. The international Eurosport panel voted and selected a surprising favorite. You can read who that is here.

Before Djokovic starts against Schwartzman, the time allows a look at yesterday’s opening day of the ATP Finals. There Rafael Nadal and Dominic Thiem got off to a tailor-made start. Nadal gave Andrey Rublev few chances and won in just 78 minutes 6: 3, 6: 4.

Thiem secured victory in a close match against Stefanos Tsitsipas in the third set. Things went worse for the German doubles Krawietz / Mies, who had to admit defeat to Koolhof / Mektic in the match break.

The first doubles match of the day has just ended. Granoller / Zeballos prevailed 7: 6, 7: 5 against Peers / Venus in a highly exciting and competitive game. With a backhand winner on serve, Granollers secured victory for the Spanish-Argentinian doubles.

This means that nothing stands in the way of the first match of world number one Novak Djokovic against Diego Schwartzman. Around ca. 15:15 the players are expected on the pitch.

Hello and welcome to the second day of the ATP Finals in London. The first individual match between world number one Novak Djokovic and Diego Schwartzman starts at 3:00 p.m. Tino Harth-Brinkmann will accompany you through the day here in the live ticker. In the evening, Alexander Zverev also intervenes in the events in the o2 arena. The German number one gets to do with the Russian Daniil Medvedev in his opening game.

Only briefly shaken: Djokovic with a sovereign opening victory

These were the details of the news NOW LIVE | ATP finals with Zverev, Djokovic and Medvedev for this day. We hope that we have succeeded by giving you the full details and information. To follow all our news, you can subscribe to the alerts system or to one of our different systems to provide you with all that is new.