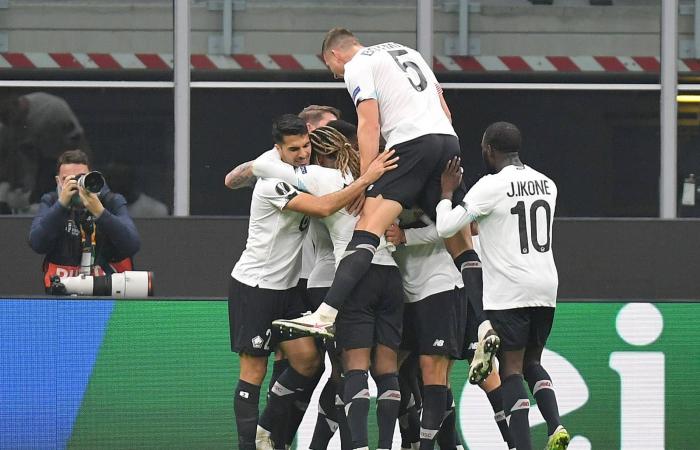 Thank you for reading the news about Europa League: Lille stun AC Milan and Zlatan Ibrahimovic and now with the details

Lille's Yusuf Yazici brought AC Milan and Zlatan Ibrahimovic down to earth with a bump on Thursday with all three goals in a 3-0 Europa League win over the seven-time European champions.

The 39-year-old Ibrahimovic had been one of the stories of the early part of the season after firing seven goals in four league games to take the Italian giants top of Serie A, but it was Yazici, who is yet to start in Ligue 1 this season, who stole the show with his hat-trick at the San Siro.

Yazici's goals put Lille, who are unbeaten in all competitions this season, one point ahead of Milan who lost for the first time since football returned from the first coronavirus lockdown.

Celtic are bottom of Group H after being hammered 4-1 at home by Sparta Prague.

"I thought we could be more dangerous, but against such a fast team once we went 2-0 behind the game got complicated. They punished us for every mistake," said Milan coach Stefano Pioli after his side's 24-match unbeaten run came to an end.

"(Ibrahimovic) was not satisfied with the team's performance nor his own."

Yazici, 23, opened the scoring when he won and scored a soft-looking penalty in the 22nd minute.

He doubled the away side's lead nine minutes after the break when his hopeful strike bobbled over Gianluigi Donnarumma's early dive and then twisted the knife three minutes later when he confidently finished a counter attack.

Incredibly it was Yazici's second Europa League hat-trick of the season following his treble in Lille's 4-1 win over Sparta Prague in the opening round of fixtures, taking his European tally to six.

Kelechi Iheanacho was the star for Leicester City as they made it three wins from three with their 4-0 thumping of Portuguese side Braga in a match that was never in doubt from the moment the Nigerian opened the scoring in the 21st minute.

He collected his second with a long range effort three minutes after the break before providing the low cross for Dennis Praet to tap home the third and end the match as a contest.

James Maddison completed the scoring from close range with 12 minutes remaining as Brendan Rodgers's went three points ahead of Braga at the top of Group G.

Fellow Premier League side Arsenal also maintained their 100 per cent record with a 4-1 win over Molde of Norway.

Earlier Harry Kane scored his 200th goal for Tottenham Hotspur as he helped fire Spurs top of Group J -- level on six points with Royal Antwerp and LASK -- with a 3-1 win at Ludogorets.

England captain Kane opened the scoring for Jose Mourinho's side with just 12 minutes on the clock when he headed home Lucas Moura's corner to bring up his double century of Tottenham goals in his 300th match for the club.

"I'm delighted with that and I probably could have scored a couple more in that 45 minutes," said Kane.

"It's a great milestone to reach and hopefully there are a few more to come."

Rangers were poised to make it three wins from three in Group D when they were 3-1 ahead at Benfica with 14 minutes remaining.

But despite losing Nicolas Otamendi to a straight red card with less than 20 minutes gone, two-time European champions Benfica fought back and in added time levelled when Darwin Nunez raced through and slotted home past Allan McGregor.

The pair are joined on seven points at the top of the group, four ahead of Lech Poznan who beat bottom side Standard Liege 3-1.

Qarabag lost 2-0 at Sivasspor to remain rooted to the bottom of Group I a day after their media manager was suspended by Uefa for reportedly calling for the killing of "all the Armenians, old and young, without distinction".

The social media post in question came amid the conflict between Azerbaijan and Armenia in Nagorno-Karabakh.

Roma took control of Group A with a thumping 5-0 win over Cluj that put the leaders three points clear of the Romanians and Young Boys.

These were the details of the news Europa League: Lille stun AC Milan and Zlatan Ibrahimovic for this day. We hope that we have succeeded by giving you the full details and information. To follow all our news, you can subscribe to the alerts system or to one of our different systems to provide you with all that is new.