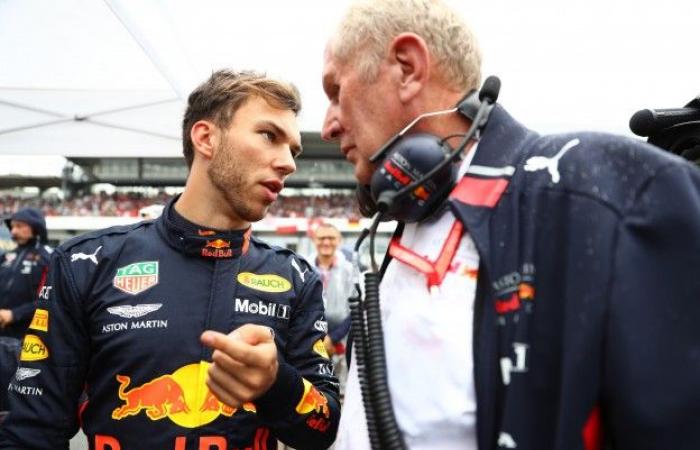 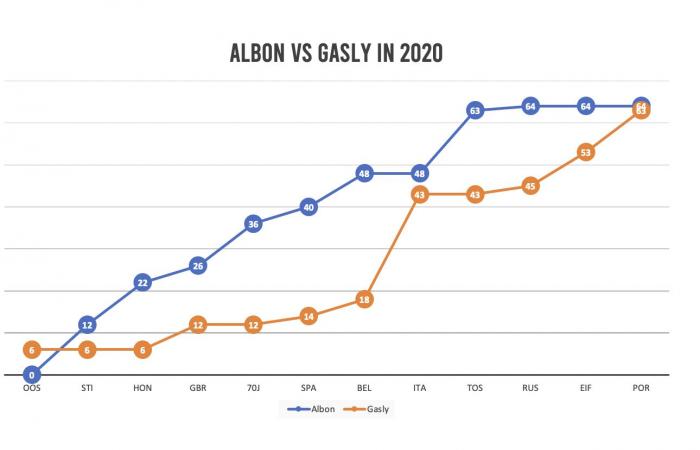 In 2018, Daniel Ricciardo suddenly decided not to renew his expiring contract with Red Bull Racing and to move to Renault. So they had to look for a new teammate for Max Verstappen. With Pierre Gasly and Alexander Albon, Helmut Marko & Co. two drivers, but both protégés disappointed. How did the two men fare and who was the biggest Red Bull flop of the past two years? F1 Maximum figured it out for you.

Ricciardo’s decision triggered a real musical chair, but nevertheless Red Bull opted for its own youth: Gasly was brought to the mother team and had to assist Verstappen in 2019 in his battle for the world title. With a year and a half of Formula 1 experience in the pocket and some good results at Toro Rosso, expectations were high, especially after Marko praised his talent several times before the presentation. Unfortunately for Red Bull and the Frenchman, 2019 was not what they had hoped for.

It seemed that Gasly had been looking for his form and perhaps his confidence from the start. In Australia, Gasly’s debut race, the driver took a disappointing eleventh place. “ It’s normal to get used to and we have to give Pierre time to acclimatize, ” Horner said after that Sunday afternoon. Motorsport.com. The contrast with Verstappen became immediately clear, because no one had forgotten the debut of the Dutchman with the team in Spain 2016.

It took until the tenth race in Great Britain for Gasly to come close to a podium place. The man from Rouen was lucky because just before the end of the race Sebastian Vettel touched Verstappen, which meant he had two less opponents. In his first twelve races, Gasly would never take a podium place, which continued to raise criticism and doubts from the Red Bull leadership. After the Hungarian Grand Prix, it was announced that Alexander Albon would take over from him and Gasly was returned to Toro Rosso.

Albon has a solid start, but is unable to continue

Albon started his first Red Bull races without many mistakes, but somewhat cautiously. The Thai was consistent, in the remaining nine races he finished in eight cases in the top six. Despite the fact that Albon often lacked speed to attack Ferrari and Mercedes, Red Bull decided to continue with him and so he was allowed to play alongside his Dutch teammate in 2020.

Certainly because Ferrari dropped out as a contender for the race wins in 2020, it was expected that Albon could compete for the podium places, but nothing could be further from the truth. The solid series of the end of 2019 could not be continued and especially since the Grand Prix of Great Britain, his confidence seems to have taken a hit. It took until the Grand Prix of Tuscany until he managed to take a podium place and that was also thanks to a happy strategy and a withdrawal from Verstappen. It slowly became clear that Albon was the second Red Bull flop in two years. The training products of the Austrian racing team were found to be too light and the statistics show that.

Graph: the points achieved in the first 12 races at Red Bull Racing of Pierre Gasly, Alexander Albon and Max Verstappen

The graph above shows a clear difference between Albon and Gasly. Right from the start, Albon scored more points, even though the Thai switched in the middle of the season and therefore had no winter to get used to Adrian Newey’s chassis. It should be noted here that Gasly already crashed the RB15 during his winter test for the Austrian racing stable on day one, which limited his minutes in the 2019 car before the season.

What is striking for both drivers is that there is a certain stagnation in the number of points after the sixth race. The average number of points per race decreases sharply after this point and that raises questions. How is it possible that the rough seems to get in after a few races? It could be that Red Bull Racing started to increase the pressure after the adjustment phase because both men were unable to achieve podium places. This would confirm the noise that the two riders cannot withstand pressure. The success of Verstappen, who was consistently faster in qualifying against both colleagues, can also cause uncertainty.

The figures above seem to indicate that Gasly has the least driving ability of the two, but the 2020 results contradict that. You can say that the Frenchman has regained his form in the sister team of the Austrians, which has been called AlphaTauri since this season. Gasly feels like a fish in water and has consistently achieved good results this season. Despite the ultra-competitive midfield, Gasly almost always finished in the top ten and even won the crazy Italian Grand Prix. The graph below clearly shows that the results of Gasly and Albon in 2020 are comparable, while the Red Bull car is a lot faster on paper. 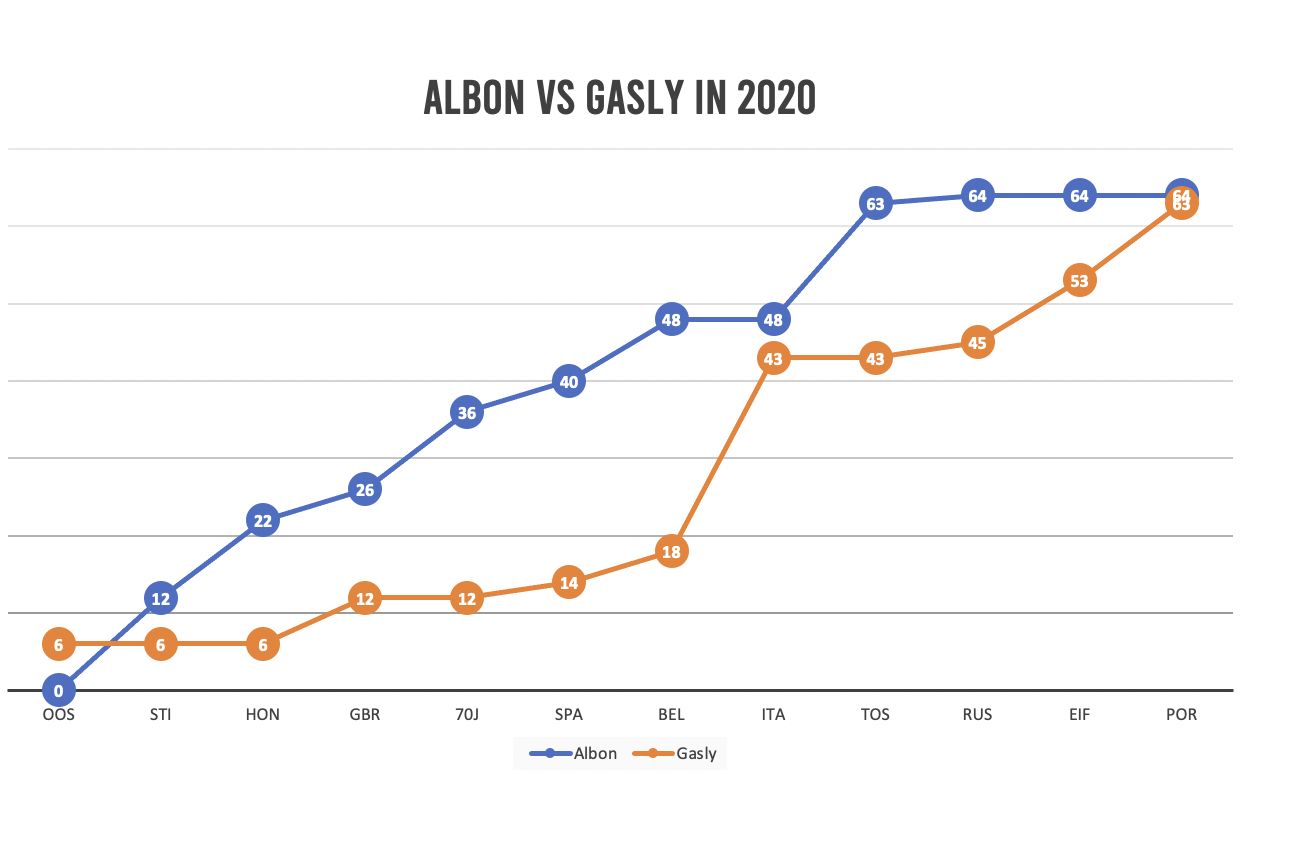 Graph: Albon and Gasly’s point numbers in 2020 so far

The graph shows the difference in shape between Albon and Gasly this year. Gasly earns the credits for his comeback after being put back to Toro Rosso, something Daniil Kvyat clearly struggled with. The AlphaTauri driver was very unlucky at the start of the season with some DNFs and wrong strategies, but has consistently shown good things (and points) since race two at Silverstone.

As the graph indicates, Albon has also achieved a consistent level of World Cup points in 2020, but the numbers are shockingly few. On paper, the Thai has the fastest car in the field after the Mercedes and he does not show that by collecting a few points. If you look at the converging lines towards the end of the current season, you would almost forget that the RB16 with Verstappen in it is on average about 1.6 seconds faster per lap than the AlphaTauri car.

All in all, it can be said that both gentlemen are not cut out for a place next to Verstappen. Whether it’s the high pressure or the self-confidence, both Albon and Gasly have made sure that Red Bull has competed with only one car in the battle against Mercedes for the past two years. The numbers confirm the suspicion that team boss Horner will have to fish outside his own pond for the ideal one wingman for his future world champion. (Photo: Red Bull Racing / Getty Images)

These were the details of the news Gasly vs. Albon in numbers: who is the biggest Red... for this day. We hope that we have succeeded by giving you the full details and information. To follow all our news, you can subscribe to the alerts system or to one of our different systems to provide you with all that is new.