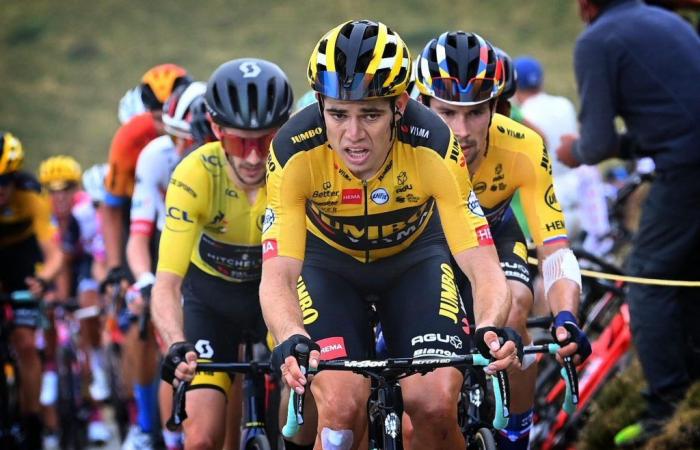 A number of arrivals in the first week that suit him perfectly. At least four potential fan stages in the first ten days. More time trial kilometers too. Wout van Aert reacts enthusiastically after a first glance at the Tour 2021 route.

Only there is one big ‘but’: to what extent can the Tour de France be combined with the road and time trial at the Olympic Games. “Choices will have to be made. But that it will be a busy 2021, that’s for sure. ”

After three intensive racing months, Wout van Aert is currently enjoying a well-deserved break. Although resting is not his thing, he says. That also betrays his Strava profile. “I can’t sit still as well as I used to. After that fall in last year’s Tour that has changed a lot. ”

“Whether I am not tired? Tired you are alone in your head, I think. Your body does need a few days to recover, but the most important thing about a rest period is that you feel like cycling again. And that enthusiasm returned quite quickly this time. By the way, tomorrow I will officially resume training, with schedule. ” Today Van Aert took a look at the route of next year’s Tour de France.

What is the first thing that strikes you when presenting the course?
“The number of time trial kilometers. A lot more than last year and I welcome that. Time trial is part of the Tour, or actually of every big round, if you assume that it must be won by a rider that is as complete as possible. The fact that the first time trial will already be held on Wednesday is extra nice. If pure climbers are already at a disadvantage there, attacks in the mountains must be accelerated. ”

“In addition, I think it will be a more classic Tour. A ‘normal’ first week, followed by the passages through the Alps and Pyrenees respectively, with a few transitional stages in between. Also striking: shorter journeys than we are used to. ”

The first week seems perfect for you. Two arrivals for puncheurs, two sprint stages, the time trial and potential fan stages.
“A completely different start than this year in Nice. And indeed with rides that fit my abilities. But it will also be different for the classification riders. You won’t win the Tour in that first week, but you can lose it. There will be more stress. And I have not yet raced in Brittany, but I suspect that the wind may play a role. But I think we shouldn’t be afraid of that at Jumbo-Visma. We have the riders for it. ”

Are you thinking about the yellow jersey in that opening phase?
“The course certainly lends itself to it. But those are things that you can only say after a plan has been effectively drawn up with the team, if the tactics are clear. And if the shape is right at that moment, of course. ”

How different will your role be? In the knowledge that there are opportunities for yourself in the first week, it may be much less obvious to safely enter the spearheads for the classification …
“The division of roles and the determination of the tactics is done according to the course. Last Tour it was – with a number of stages that were important for the classification – it was important to be on the same page. It could be that the division of roles is different in such a first week, that I can take more my own chance. But here too: we haven’t talked about it with the team yet. ”

“We haven’t had our evaluation of the last Tour de France yet. Are we going to do the same next year? Are we trying to win the Tour again with Primoz? Those are things that will be discussed after this season. A number of team mates are still racing. ”

Jumbo-Visma already announced its Tour core this year at the team presentation. That is quite unique …
“I suspect that several teams make their annual planning early, but do not share this with the outside world. Personally, I find it convenient that Jumbo-Visma does. That as a rider you should not be secretive about this and that you can talk freely about your program and your goals. That also applies to leaders and helpers. ”

Perhaps the question for you: can the Tour de France, which ends on July 18, be combined with the Olympic Games? The road race is scheduled for barely six days later.
“It will be a difficult exercise. This year I digested the Tour – World Championship combination well. That was a good test. Especially because I went all out until the last day of the Tour. On the other hand, you cannot compare the World Cup and the Games. There is the climate in Tokyo, jet lag … That is different from traveling from Paris to Imola. I am not yet sure what 2021 will look like for me. But I fear that choices will have to be made. ”

Hunt for the green in the Tour or hunt for an Olympic medal. Or both… What a dilemma.
“The Olympic Games, that’s only once every four years. That means that as a professional athlete you have a maximum of three chances and you are also dependent on the course. I will certainly take that into account. But to win the green jersey, you also need a number of years. Just like you don’t win the Tour of Flanders with your first participation. So I also expect to have to invest in winning the green jersey. I don’t want to miss too many opportunities in that respect either. But both so close together .. I can’t answer it yet. ”

“To be clear, I don’t have a selection for the Games yet, eh. I haven’t heard from the BOIC (Belgian Olympic Committee, ed.) Or Belgian Cycling yet. Although I do expect to be among the contenders for a selection. ”

Is it an option to leave the Tour after two weeks?
“Giving up is difficult, I think. I rarely or never do that, unless after that fall in the Tour last year. So no, right now I’m not thinking about that. If that really turns out to be the key to success, then I want to think about it. But can you determine whether something like that is better? ”

Teams sometimes complain about the poor commercial return of a world or Olympic title. Because you don’t ride in their shirt that day. Could that play a role in the decision to choose the Tour anyway?
“I sometimes hear that. But in the end, a team is happy to be able to turn out a whole year with the fact that it has the world champion in its ranks. And with an Olympic title you can spend your entire life. So that is not too bad, I think. Okay, if you put it all together, the Tour might be more interesting, but that doesn’t mean the Games aren’t interesting. In that respect, I don’t expect any problems with the team. The sporty has priority. ”

These were the details of the news Wout van Aert faces a difficult choice: Tour de France and... for this day. We hope that we have succeeded by giving you the full details and information. To follow all our news, you can subscribe to the alerts system or to one of our different systems to provide you with all that is new.