The scenes of Kahrabas clash with Mohamed Fadl, a member of... 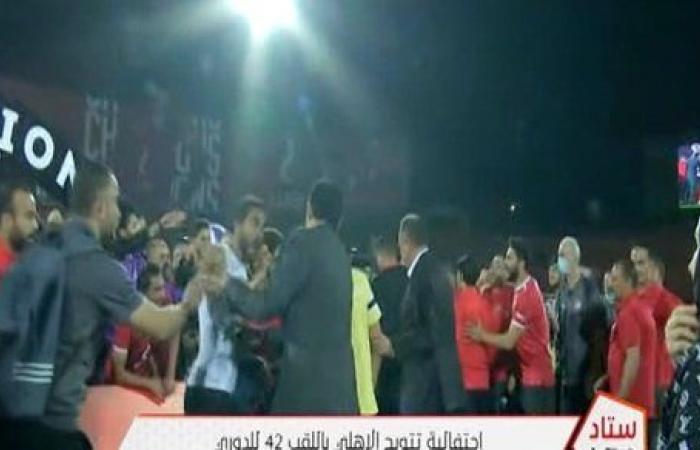 Al-Ahly’s celebrations for the crowning of the league title witnessed a clash between Mahmoud “Kahraba”, the red giant’s player, with Muhammad Fadl, a member of the Five-Year Committee, while Moamen Zakaria entered the stadium to celebrate the shield.

The journalist Hani Hathout wrote on his Twitter account: “What I learned in the clash of Kahraba and Muhammad Fadl is that a member of the Five-Year Committee wanted to carry the son of Moamen Zakaria.

The moment Muhammad Fadl descended to the pitch to hand over the shield to Al-Ahly, accompanied by Mahmoud Al-Khatib, Chairman of the Club’s Board of Directors, and Moamen Zakaria, an altercation from Kahraba and a clash with Fadl in the hands of a sad scene.

AndThe events of the Al-Ahly and Al-Jaish match ended with the red giant advancing by three goals without a response, in the match that was held at Al-Salam International Stadium in the final round of the Premier League championship.

Walid Suleiman was alone with Mohamed Bassam, Talaa Al-Jaish goalkeeper, after a Kahraba pass and scored the goal in the 45th of the match.

In the second minute of the match, Al-Jaysh almost managed to equalize, but Al-Arabi Badr, Al-Ahly player, managed to prevent the ball from entering the ball into Ali Lotfy’s goal, after an elaborate header from Al-Jaish player.

Al-Ahly players did not calm down and continued to organize attacks on Al-Tale’aa Al-Jaish’s goal, but they were unable to add another goal.

Alio Badji passed the ball from in front of the penalty area to Geraldor, to get alone with goalkeeper Mohamed Bassam, scoring a wonderful goal over the goalkeeper, and taking the second goal in the 17th minute of the match.

Al-Ahly goalkeeper Ali Lotfi suffered a severe injury and called the medical apparatus on the field, received treatment and completed the match.

Then Al-Arabi Badr suffered a midfield injury after the Talaia Al-Jaysh player interfered with him strongly, but it did not affect him and he continued in the match.

Mahmoud Abdel Moneim Kahraba scored the third goal with a powerful shot. Mohamed Bassam could not do anything against it in the 36th minute of the match.

Kahraba celebrated the goal by taking off the shirt, and the emergence of a picture of Moamen Zakaria, the Al-Ahly player, who was in the stands to hand over the league shield in a distinctive gesture from the Al-Ahly board of directors.

The crowd chanted the name of Moamen Zakaria immediately after his appearance in the stands after a long absence.

These were the details of the news The scenes of Kahrabas clash with Mohamed Fadl, a member of... for this day. We hope that we have succeeded by giving you the full details and information. To follow all our news, you can subscribe to the alerts system or to one of our different systems to provide you with all that is new.