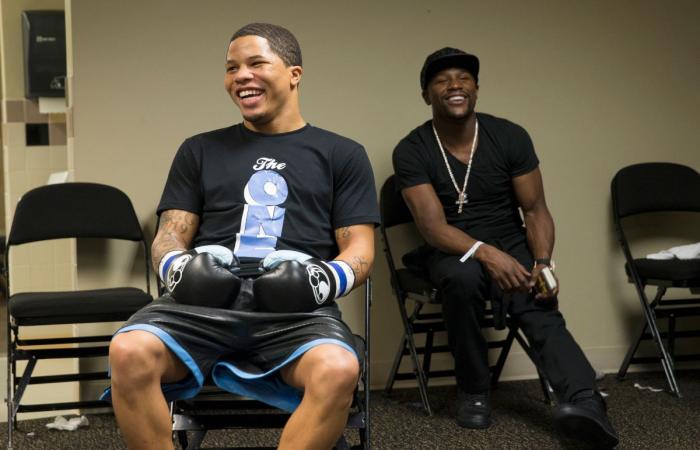 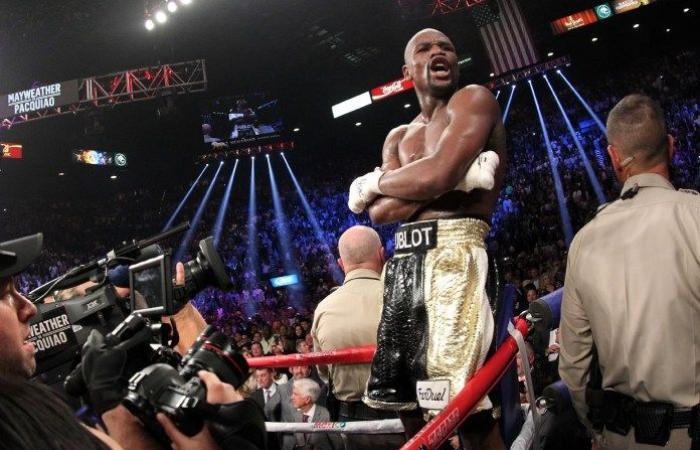 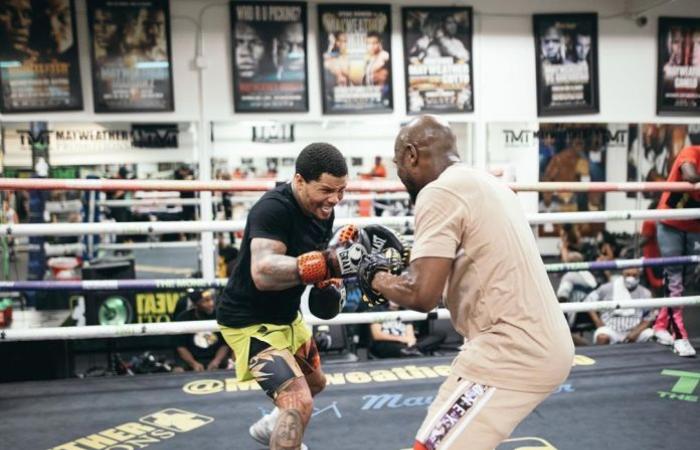 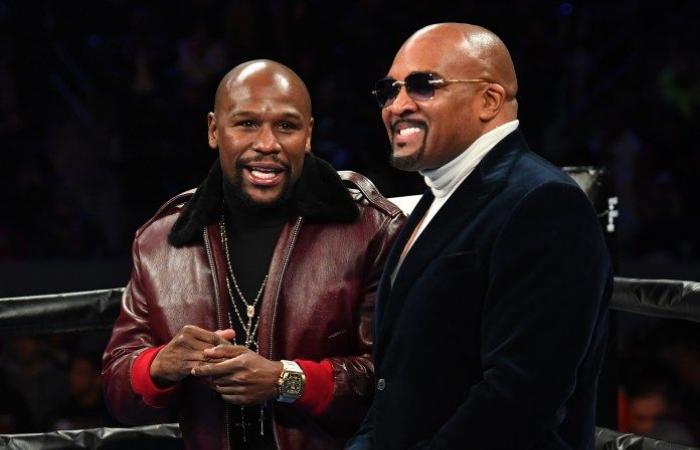 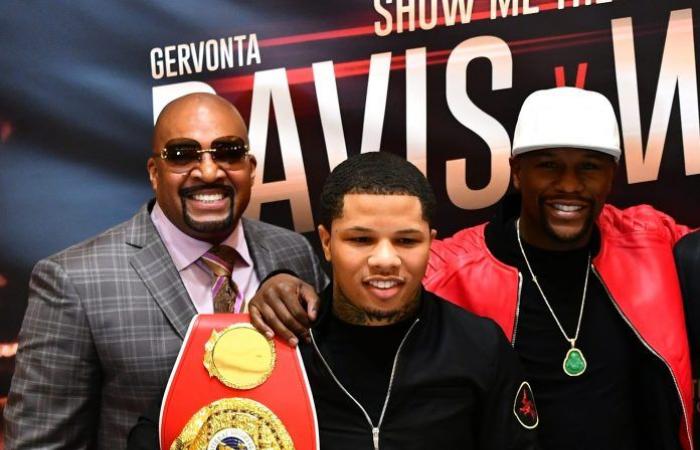 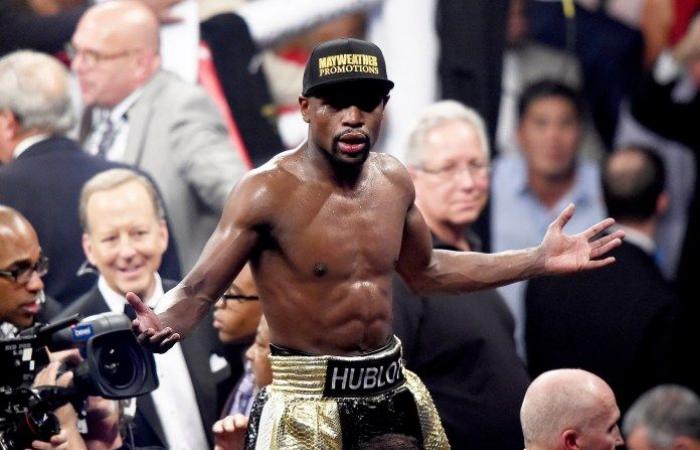 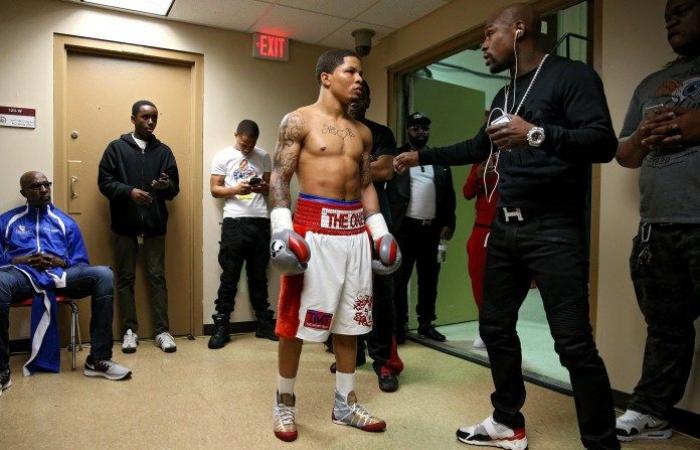 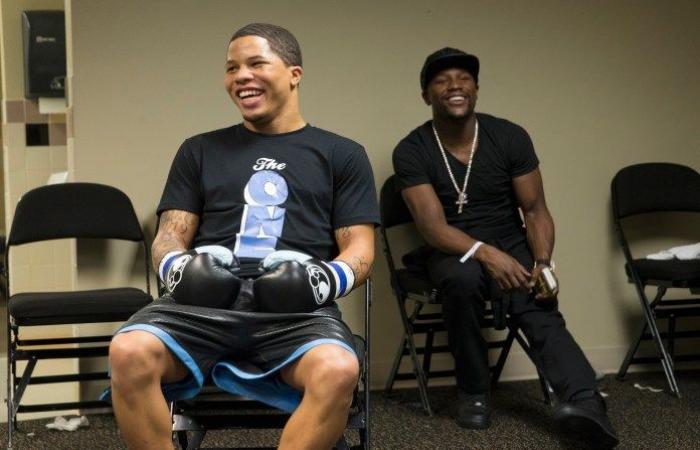 Gervonta Davis was given some serious strength by adding Floyd Mayweather to his training team ahead of his first big fight against Leo Santa Cruz this Saturday.

The American starlet became one of the youngest world champions in boxing when he spectacularly stopped Jose Pedraza in early 2017.

Since then, his career has been a stop-start and at times his relationship with his promoter Mayweather has seemed troubled.

Now the 25-year-old is back on track and the momentum with Floyd alongside original coach Calvin Ford seems more fruitful than ever.

“When I was preparing for this fight, I wanted to bring my camp to Las Vegas,” explained Gervonta.

“I’ve been training for more than six or eight weeks because I know I’m up against a top fighter.

“We know Leo comes to the fight, he brings pressure, he’s a high volume puncher.

“So I made my camp here more to just focus on boxing.

“I’m working closely with my Mayweather team to have Floyd Mayweather more in the gym, hands-on, and things like that.

“He’s always been practical – he didn’t train, he told me what to do in the ring. He was there to coach me through my first PPV fight.

“You have a lot of pressure on yourself because of the crowd. You have to live up to the fight against PPV because you don’t want to fight PPV just once, you want to keep fighting PPV.

“All around. Train me, be there when I’m down, squeeze me. There are things Floyd Mayweather can tell me – because he’s been there before – that my coach can’t.

“It was hand in hand with both my trainer and Floyd. The sky is the limit for me. ”

Mayweather agreed, “In the gym, Calvin and I work hand in hand. For those of you who don’t know who Calvin is, this is Tank’s Trainer.

“Us and Calvin, we talk, we work together in the gym.

“Sometimes I have to go, fly away and take care of business, but when I get back I give pointers, talk to him about PPV and how things work.

“Because sometimes when a man is in a boxing hall and has worked hard all day, sometimes a man doesn’t want to do certain interviews and the like.

“When we invest in a fight like this, we want these guys to give us 100 percent because we give 100 percent …

“I believe in ‘tank’. I’ve believed in him since he was a little kid. He’s still a little kid to me, but we know he’s an adult, he’s a young man.

“But I still see this young kid and I said to him, ‘One day you will be on PPV and it will come very quickly and when it comes, be ready.'”

Davis (23-0, 22 KOs) previously had titles at 130 pounds before trying to gain weight, was stripped and later increased to 135 pounds.

Now, however, he decides to drop back to £ 130 for a big fight against four-division champions Santa Cruz.

Regarding speculation about whether Gervonta will gain weight, Mayweather said, “I’ve told him this before. Fighters can be your worst enemy.

“I’m always real with him because he is important to me. Boxing isn’t something that isn’t done for just eight to ten weeks, boxing is a lifestyle.

“Even if you’re not fighting or sparring at the gym, make sure you run.

“I want him to still run or just go to the gym and hit the bag and hold the weight.

“Show that he is very responsible as a young man.”

“While I save, he’ll come in there and show me what he’s talking about if I don’t understand.

“He was actually a great help in this camp, to be honest he was more than my coach at that point

“He watched Leo and told me what he likes to do. He was of great help to this camp. ”

As Gervonta notes, Mayweather was there and did it.

He’s been through everything the talented boy is experiencing now and, on the other hand, has been an overwhelming success.

“I still give him pointers because he has a daughter he spends a lot of time with,” Mayweather said.

“Of course he’s in a position where he can travel a lot now and he does a lot of different things that I’m proud of.

“I am proud that I can enable him to be a multimillionaire.

“I will always be handy in discussing life lessons with him and what he can do to get better both inside and outside the ring.

“And to talk to him about how I didn’t make the same mistakes that I made.”

When asked what Floyd taught him most, Gervonta concluded, “Save my money, invest.

“It’s not even really about boxing, it’s just clues about life and things like that.

“Boxing – that comes afterwards. So basically they are indicators of life, I come under him.

“I’m definitely grateful that I have one of the best in my corner.”

These were the details of the news Floyd Mayweather and Gervonta Davis begin their training relationship as pound... for this day. We hope that we have succeeded by giving you the full details and information. To follow all our news, you can subscribe to the alerts system or to one of our different systems to provide you with all that is new.