How to Watch ‘The Shop’ with Barack Obama and LeBron James... 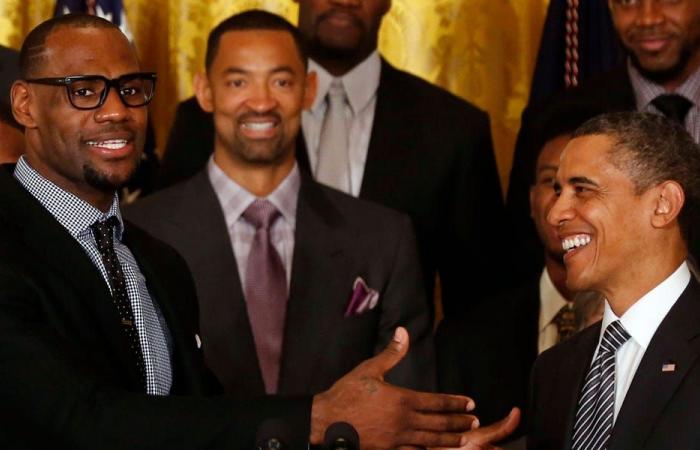 If you buy through our links we can make money from our affiliate partners. Learn more.

Former President Barack Obama will appear on a special episode of LeBron James’ HBO show “The Shop: Uninterrupted” to discuss the importance of the vote, the 2020 election and the growing movement for racial justice in America. The episode premieres on HBO tonight at 9 p.m. ET and is available for free on HBO Max from October 31 through November 28.

Obama shared a preview of his socially distant conversation with James on Twitter, as well as a link to More Than A Vote, an organization founded by black athletes to help people figure out how to properly cast their vote in this year’s election .

James reportedly contacted Obama earlier this summer after the NBA players took a work hiatus to protest police violence. The former president advised players to continue the season and campaign for the NBA to make team arenas across the country the polling stations for the upcoming elections.

James began hosting “The Shop” on HBO in 2018; This year’s guests included the late Chadwick Boseman, who died of cancer in August, and Super Bowl MVP Patrick Mahomes. Every episode of the show can be streamed on HBO Max for $ 14.99 per month.

How to see former President Barack Obama and LeBron James in “The Shop: Uninterrupted”

The episode of “The Shop,” starring former President Barack Obama, can be streamed for free from October 31 through November 28 on HBO.com, the HBO and HBO Max YouTube channel. If you’re an existing HBO or HBO Max subscriber, you can watch the episode as soon as it premieres on October 30th at 9 p.m. ET.

After November 28th, you will need an HBO Max subscription to watch this and every other episode of The Shop. The service costs $ 14.99 per month, although new members can get a free 7-day trial. In addition to original HBO series like “The Shop,” HBO Max has a huge library of classic movies and shows from sources like DC Comics, Turner Classic Movies, and Adult Swim.

HBO Max was launched in May as a replacement for the streaming services HBO Now and HBO Go. If you’ve already subscribed to HBO through your cable provider, there’s a good chance you’re getting HBO Max for free. Here you can see if your current subscription supports HBO Max.

The HBO Max app is available for Android, iPhone, PlayStation, Xbox, Chromecast, PC, Mac, Samsung TVs and Apple TV. The app is not yet available on Roku or Amazon Fire streaming devices.

The HBO Max app only supports resolutions up to 1080p. A spokesman for the service previously said 4K streaming and HDR support will come to the app at a later date.

These were the details of the news How to Watch ‘The Shop’ with Barack Obama and LeBron James... for this day. We hope that we have succeeded by giving you the full details and information. To follow all our news, you can subscribe to the alerts system or to one of our different systems to provide you with all that is new.