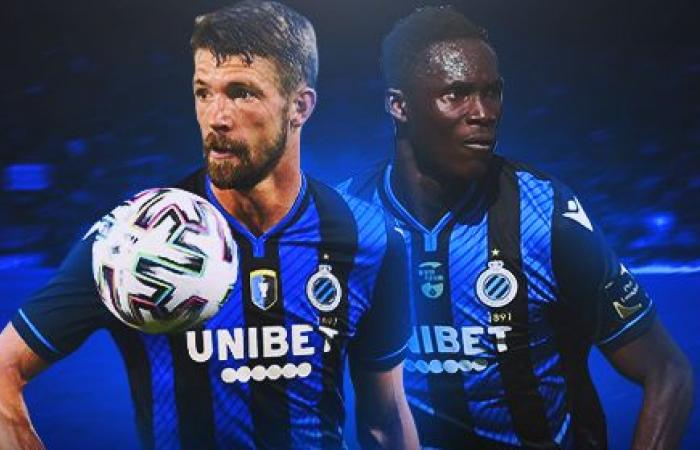 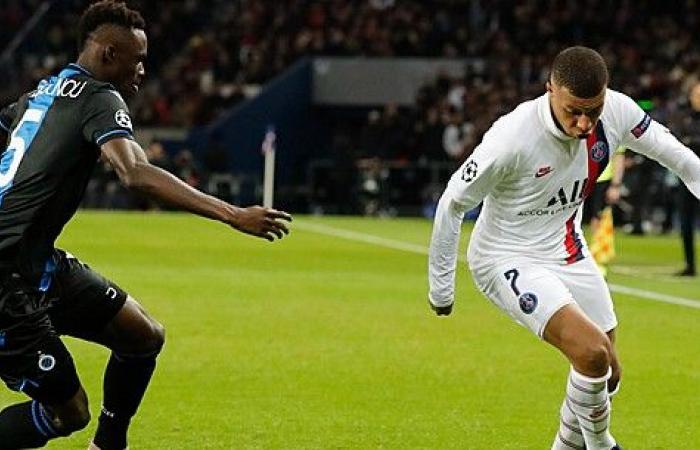 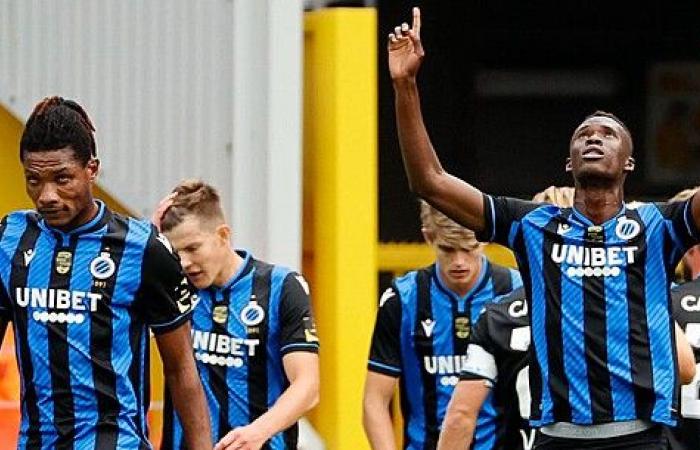 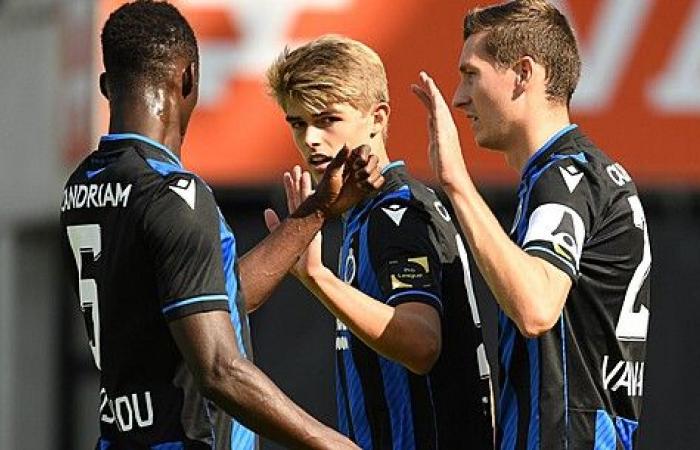 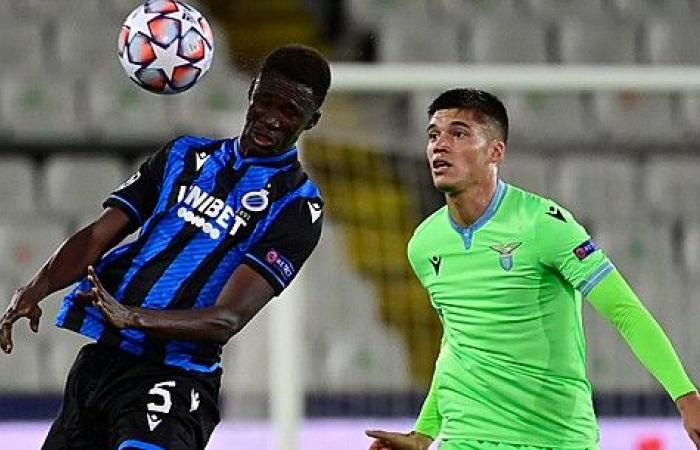 Four out of six, and yet there was more to it. That is the general tenor at Club Brugge after the first two matches in the Champions League. Just like on a visit to Zenit, nobody fell through the basket against Lazio in-house, more in fact: the stars could hardly be counted on one hand. Nevertheless, we would like to highlight one person in particular: Odilon Kossounou.

Simon Mignolet made a crucial save in the second half off Sergej Milinkovic-Savic, who then managed to escape the attention of an otherwise excellent Mats Rits on a rare occasion. The vacuum cleaner ruled together with Ruud Vormer and Hans Vanaken in midfield and also cleverly provoked a penalty kick at the Roman defense, which had its hands full with Charles De Ketelaere, Emmanuel Dennis and especially Krépin Diatta – all also useful defensively. Furthermore, Clinton Mata once again showed his unyielding self and Eduard Sobol also delivered an excellent performance, although the most danger came from the right again. Together with Dennis, whose actions failed just a little too often despite the threat he always brings, Simon Deli was perhaps the least Bruges resident. Also without appearing below par, admittedly.

The rock in the surf was still excellent in St. Petersburg replaced by Federico Ricca, but was now allowed to take his place in the left side of the trio in the back somewhat surprisingly. The real surprise du chef of Philippe Clement, however, was Kossounou, who received a central preference over Brandon Mechele. Yet the twofold Red Devil in Russia did not fail either. A few days earlier he suffered a number of stupid loss of possession on the field of Standard, just like on match day one when Ryota Morioka and Charleroi gratefully received his gift. Mechele then simply continued to enjoy the confidence, which is logical also given his track record, until he passed a positive corona test during the international break at the beginning of September.

Since double Matej Mitrovic has been in the rag basket for a long time as usual, it was Kossounou’s turn for the first time this season against Waasland-Beveren on match day five. The 19-year-old Ivorian did not disappoint afterwards against Zulte Waregem and therefore stood for the squatters against Cercle and Anderlecht even after the return of Mechele, in which he also effortlessly pulled his string. Nevertheless, the teenager in Liège made way for Mechele, who was not exactly convinced there. Then Kossounou himself tested positive for corona, resulting in an absence against Zenit and OH Leuven. Who knows otherwise he and not Mechele could have taken on Artem Dzyuba. Finally, his peer De Ketelaere was also saved from Sclessin.

Moreover, it became clear in the previous Champions League campaign that Clement dares to draw Kossounou’s card. Due to the injury of Clinton Mata, after a number of successful performances in the competitions, he suddenly came face to face with Kylian Mbappé, who had single-handedly made firewood from the Blue-Black defense a few weeks earlier in Jan Breydel. Kossounou, however, stood more than his ground in Paris and impressed, especially for someone his height, with his unparalleled speed. Although a confrontation with Didier Lamkel Zé a few days later turned out to be just a bit too much. It was striking that the central defender was always played as right back, often even in a four-man defense.

Perhaps Clement did not think he was mature enough at the time to fulfill exactly the same role as Mata or to function in the axis of the field – which is the case now. After his brilliant performance against PSG, Kossounou experienced a setback last year, starting with the defeat in Antwerp. Afterwards, the recovered Mata naturally took his place again, but when he was suspended in Anderlecht Kossou his chance again. At half time, however, he was replaced by Dion Cools, and in the Europa League diptych against Manchester United – when Club was struggling with numerous injuries – the youngster remained below expectations. Although that had to do with the unconventional positions, on the flank and even as a defensive midfielder, which he had to occupy.

Nevertheless, his talent was already beyond question. In addition to this impressive versatility at such a tender age, his physical properties cannot be ignored. Kossounou is big, strong and fast, assets that will take you a long way in modern football. In addition, just like his more experienced fellow countryman at his side, he already radiates enormous peace and self-confidence. Both in his defensive actions and in possession, although his long passes sometimes leave something to be desired. Nevertheless, Kossounou can by no means be called a weak link in the structure, on the contrary. The bravado with which he again attacks against Lazio and defused long balls, often with an overview and an eye for the footballing solution, testifies in any case to courage and pure quality.

Many of those capacities already caught the eye last year, although he only came to work 12 times in total. No wonder that in the summer of 2019 Vincent Manaert had seen enough after barely nine matches at the Swedish Hammarby to put nearly four million on the table. A daring investment, which already seems to be paying off. According to the specialized Transfermarkt.com Kossounou, now also international, is after all worth six million today. A profit margin for which Club would probably not settle. While all eyes are on Dennis and Diatta to bring in a lot of money, it can already smell the millions for Kossounou. Just like for De Ketelaere and Youssouph Badji.

Not that Blauw-Zwart is in a hurry to cash in on the talented trio built in 2001 as soon as possible. After all, they first have to take further steps in their development, starting with enforcing a permanent base place. Subsequently, the aim is to harvest sportily and to boost their market value even more through good performance, before thinking about a lucrative transfer. Confirmation is now the message, something that Kossounou did against Lazio with verve. The young revelation simply continued his form in the Jupiler Pro League at the highest level and thus showed that he has everything to become a future top player in the center of the back. After all, his combination of flair and serenity remains a rare mix at that age.

On top of the physical and technical qualities that we already attributed to him a year ago Kossou so a lot of steps in recent months. And he grew up, both literally and figuratively. His strong performance against Lazio is the best proof of this, although the diamond in the rough – which just a little too simply gave up the center – had butter on the head with Deli and Rits in the counter hit. Occasionally, the duo was also tempted to cover a little too far around the central lane. Fortunately, the Italians did not have Ciro Immobile to take advantage of the sea of ​​space in their back during those phases. Some planing work is therefore still required on a tactical level, but don’t let that detract from Kossounou’s excellent game.

Mechele undoubtedly saw from the sofa how it will not be easy to regain his place, although Clement did not want to know about a pecking order afterwards. “Odilon started today, but that could just as well have been Brandon. My players cannot play all matches, so I will also rotate with my defenders,” said the Bruges coach, who further said that he was satisfied with both their performances on the champions ball. While we definitely don’t want to fall into the trap of underestimating Mechele, which happens all too often, Kossounou seems better in certain aspects. It would therefore not surprise us if Clement would opt again for the Ivorian against Borussia Dortmund next week to catch battering ram Erling Haaland.

The international scouts from the major leagues will undoubtedly be watching. They probably also see how the teenager, on top of his current capacities, has a lot of progression margin. Kossounou may therefore be part of the defensive top players who passed through our country, such as Kalidou Koulibaly, Eliaquim Mangala or Chancel Mbemba. The latter earned Anderlecht 12 million five years ago, beating Daniel Van Buyten and Vincent Kompany as the most expensive defender ever from the JPL. A price tag that Kossounou, which is fixed until 2023, who knows, who knows. Although we may then speak out of turn. Before he can yield a multiple of his purchase price, he must Kossou after all, finally take the upper hand over Mechele in the important competitions. Unfortunately for the Bruges figurehead, this seems to be the case.

POLL: How much do you think Kossounou will yield?

These were the details of the news Bad luck for Mechele: Club Brugge smells record transfer for this day. We hope that we have succeeded by giving you the full details and information. To follow all our news, you can subscribe to the alerts system or to one of our different systems to provide you with all that is new.