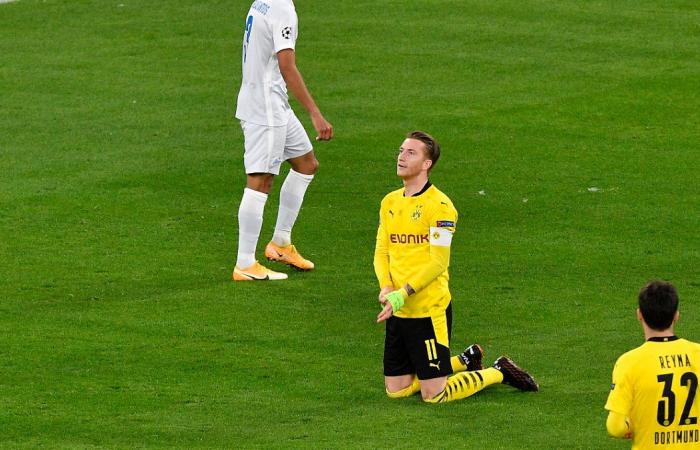 After the premier class false start in Rome at the first home game of the group stage, Borussia Dortmund needs a gift from the opponent in order to achieve their first victory. The defense is bombproof, the discussions about captain Marco Reus are met with incomprehension.

Somehow the scenario seemed bizarre: The sky had opened its locks over the largest stadium in the republic, in Dortmund it was pouring out of buckets. The actors in black and yellow struggled on the lawn, the voices echoed through the night in the huge concrete building. Anyone who longed for normal times at the Revierderby on Saturday in the face of 300 visitors in the arena, which can hold more than 80,000 spectators, could now experience that things are still dreary.

For the first time in its history, BVB had to play a European Cup match as a ghost game, it was not an experience that aroused lofty feelings in football romantics. Even the 90 minutes were not suitable for being able to speak of an entertaining evening with increased memory value. It was the typical script that has been around for generations in goalless draws: one team walled itself in, the other worked unsuccessfully to crack the bulwark.

This is exactly how it would have happened if Zenit St. Petersburg had not decided in the 77th minute to present the Dortmunders with a very generous gift: After a cross from Thomas Meunier, Vyacheslav Karavaev tore the substitute Thorgan Hazard to the ground so clumsily that the referee Björn Kuipers had no other option than to point to the penalty spot. It was an unexpected opportunity to steer things in the right direction, which Jadon Sancho did not miss.

Favre has to intervene again and again

It is hardly worth mentioning that Erling Haaland scored his twelfth goal in the tenth Champions League goal in stoppage time. The phenomenon from Norway actually always hits. The 2-0 (0-0) was a game “that will not go down in football history”, as sporting director Michael Zorc later aptly recognized: “But we take the three points with us. Obligatory task fulfilled.” In fact, after the shockingly bloodless appearance at the start of the premier class in Rome, Borussia is now back on target in a group in which failure would amount to real embarrassment.

Coach Lucien Favre explained after the game why it was so difficult for the hosts to crack the opposing defensive bar. “Our plan was to play a lot on the outside,” said the Swiss, but Sancho and Giovanni Reyna were “drawn inward too much”. Again and again Favre appeared on the sidelines and called “wider, wider” on the field.

After all, the 62-year-old can rely on his defense. In a squad with so many top-class offensive players, the defensive record is indeed very impressive: BVB has played eight competitive games in three competitions this season, six of them without conceding a goal. Like four days earlier in the derby against Schalke, Borussia did not allow a shot at their goal. Favre commended himself accordingly: “They did very well, anticipating the depth. There can always be a counterattack, but we didn’t give them an opportunity today.” Defense chief Mats Hummels is the guarantee for this consistency. The debates about the return of the veteran to the national team are also becoming more urgent because the DFB-Elf recently had to struggle with considerable stability problems.

The captain question at BVB

The second person that occupies the Dortmund environment concerns Marco Reus. Most recently, the former national player Dietmar Hamann, in his role as an expert on “Sky”, expressed his incomprehension about the fact that the injury-prone striker was captain at BVB. In Hummels, BVB has a “brilliant leader who has shown in the past that he can speak up, that he can inspire people”. The debate about the “Footballer of the Year 2019” is also being conducted elsewhere, recently the “Spiegel” asked: “Is the captain of Borussia Dortmund no longer inviolable?”

They don’t like such digressions at the stock exchange-oriented football company, the counterattack by managing director Hans-Joachim Watzke was not long in coming: “Dietmar Hamann often analyzes very accurately. But he’s completely wrong here. How does he want to be able to assess internal team processes? Marco is a good captain, “said the 61-year-old on record. Zorc sees it the same way: “I don’t understand the whole discussion. Marco is our captain”, that Reus “cannot play every game over 90 minutes after more than half a year” is clear to everyone.

Against St. Petersburg Reus was under special observation, but was unable to set any highlights and was replaced in the final phase. Maybe Hamann is not so wrong with his view after all, and you are doing the brilliant footballer Marco Reus the greatest favor by letting him do what he does best: play brilliant football.

These were the details of the news Debate about Reus causes displeasure: How good that BVB accepts gifts for this day. We hope that we have succeeded by giving you the full details and information. To follow all our news, you can subscribe to the alerts system or to one of our different systems to provide you with all that is new.