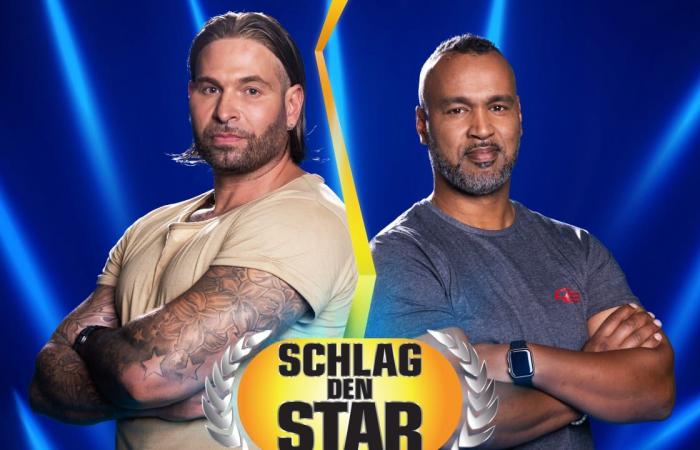 The moderator’s knees must have shaken for a moment …

On Saturday evening, goalkeeping legend and ex-wrestler Tim Wiese (38) got into the ring at “Schlag den Star” against American football coach Patrick Esume (46). But while Wiese acted almost without a word for long stretches of the Pro7 show, he freaked out in the 12th game and messed with host Elton (49).

At this point, there was a tie between Wiese and his rival. It goes without saying that the nerves were mightily bare. In the match “What does not fit?” The moderator showed them four pictures each, one of which did not fit the generic term.

Things didn’t start well for Wiese. During the trial run, he forgot to buzz. A faux pas that he later had to avoid. When it was 4: 4 after the eighth round, the ex-goalkeeper wanted to score points so doggedly that he buzzed before the pictures could even be seen. That is clearly against the rules.

His counterpart railed: “I haven’t had a picture here yet!” When Elton von Wiese wanted to know why he had pressed the button anyway, he complained that his screen remained black because of the rule violation. The candidate angrily: “That doesn’t work . Something must come. “

Elton explained to him: “You mustn’t press if there isn’t a picture yet.” But that made Wiese really angry. He got up from his stool and moaned: “I don’t see it that way now. Usually the terms are given . ” After Elton denied this, Wiese remained stubborn and maintained: “Yes, that’s the way it is!”

But it didn’t help him. The round was played from the beginning. Because Esume was buzzing too quickly this time, Wiese finally broke the collar. The muscle machine jumped up again, very annoyed, and for a short time you even had the feeling that the former Werder Bremen star was throwing out.

In order to save the whole act, Elton gave a tough announcement: “Wait a minute before you see the pictures, damn it!” The moderator then grinned: “I thought nothing more could come after Verona Pooth.”

The advertising icon had annoyed him in the previous broadcast with her chatter. Wiese didn’t want to laugh at this gag and instead snapped: “Just keep going, come on!” At the end of the game, he was still able to win by one point.

But he wasn’t always so lucky that evening. When it came to guessing car brands, Wiese had absolutely no plan. Elton teased: “It’s probably because the cars are too small for Tim. That’s why he doesn’t know her. “

With the match “first name” it was already clear in the trial run: This is not his game. Elton gave the full names of famous people. His two celebrities should tell if the first name is correct. During the test, Tim Wiese thought that Chancellor Merkel’s was actually Angelika instead of Angela. His opponent won the challenge.

On the other hand, he was often ahead when it came to sporting challenges and overtook Patrick Esume with points at a late hour. Game number 15 became Wieses match point game. It was a question of snapping another piece of plastic onto a block of wood.

Because Esume won, the next duel brought the decision. Again it was about skill. With a wooden stick, small balls should be placed on a hanging ball bed so that no ball falls. Whoever did it had lost the match and with it the show.

In the end, Tim Wiese kept his nerve, won and took the jackpot of 100,000 euros shortly after midnight. At least then he could finally laugh again.

These were the details of the news Zoff at “Schlag den Star” – Tim Wiese messes with Elton... for this day. We hope that we have succeeded by giving you the full details and information. To follow all our news, you can subscribe to the alerts system or to one of our different systems to provide you with all that is new.