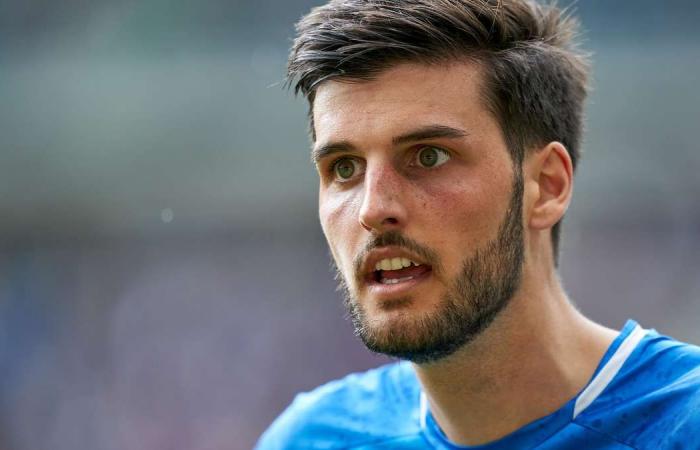 Sinsheim – From 2013 to 2017 he was at home at Osterdeich and especially in the Weser Stadium – then Florian Grillitsch (25) moved from SV Werder Bremen to 1899 Hoffenheim. On Sunday, the 25-year-old will be returning to Bremen for the third time to play against his former club.

In conversation with the DeichStube did he previously reveal that Werder Bremen was just too late for him back then and what his line to Bremen looks like today. The Austrian also spoke about the advantages of Hoffenheim’s new trainer Sebastian Hoeneß and about playing football in the middle of a pandemic. Incidentally, all of this at the beginning of the week before defender Felix Agu’s positive corona test became known at Werder and before Florian Grillitsch was substituted on Thursday evening at the halfway point of the Europa League match against Belgrade to attend the birth of his child.

What does the return to the Weserstadion do to you, Florian Grillitsch?

I am happy every time I come to Bremen and play there. I grew up as a professional at Werder. There I had the opportunity to join the Bundesliga. I had nice years in Bremen and always felt very comfortable. I am also happy to see old friends again.

Who are you still in close contact with at Werder Bremen?

To Maxi Eggestein and of course to my compatriot Marco Friedl. And Theo (Gebre Selassie, editor’s note) is still there.

You have surely noticed that he has now even been promoted to vice-captain.

Yes, and fully deserved! It feels like he’s been playing in Bremen for 20 years.

If Werder Bremen is so close to your heart, why did you move to Hoffenheim in 2017?

I had signed my first professional contract back then in Bremen. It only ran for one year, with an option to extend it for another year. I performed well so other clubs took notice of me. Hoffenheim with Julian Nagelsmann, already a talented young trainer at the time, was among those interested. This is how the change came about.

Did Werder Bremen even have a chance? Was a contract extension ever up for debate?

There was no conversation for a long time. When they started, I had already decided on Hoffenheim.

Everything done right, you could say. At that time, and even more so today, Hoffenheim was on a completely different level than Bremen. The development of the two clubs in the Bundesliga shows you are right, right?

I am more than happy. I took the next step in Hoffenheim and play internationally on a regular basis. Even in the Champions League and currently back in the Europa League.

Werder Bremen: Florian Grillitsch trained under Florian Kohfeldt in the U23

You used to train in Bremen in the U23 under assistant coach Florian Kohfeldt. Today he has a very good reputation in the Bundesliga. How do you rate him?

Of course, it makes a difference whether you get to know someone as an assistant or as a head coach. But what I can say: On the one hand, Florian Kohfeldt is a great guy in human terms. And on the other hand, he also has immense professional qualities. In terms of tactics, he was able to give us a lot.

Let’s get to your current trainer who has a very famous name. How do you experience Sebastian Hoeneß?

He is one of the representatives of the new and increasingly represented generation of young football teachers. He’s more of a quiet guy and it’s very pleasant to work with. Sebastian Hoeneß is already at a top level.

“The best six in the league,” said your ex-coach Nagelsmann about you some time ago. What did you feel about it?

It’s nice to hear that. Of course I am pleased with such praise from his mouth. Because Julian Nagelsmann is now someone in the industry. He has become a really big name in international business.

Could his compliment be a temptation to win you over to Leipzig?

I do not know that.

In the summer you were considered a hot candidate for change. Your contract in Hoffenheim runs until 2022. It should contain an exit clause, which provides for a transfer fee of 20 million euros for a transfer within Germany …

I won’t say anything about the details of my contract. I’m also very satisfied with my commitment in Hoffenheim, after all, I’m playing here for the fourth season. And the last transfer period turned out to be a bit difficult – due to Corona, as everyone knows.

In addition to RB Leipzig, you have been associated with Arsenal London and Inter Milan. Would Leipzig be a conceivable destination? Or do you, as it is rumored, favor a transfer to the Premier League?

If I leave Hoffenheim, I will aim for the next step in my career – regardless of the league in which I am. It would have to be a top club from home or abroad.

Are you betting on the transfer phase in winter?

At the moment I don’t waste a thought on it. Hardly anything will have changed on the transfer market in three months. But you never know what is going to happen in football because sometimes things can happen very quickly.

One game from the start and two substitutes so far – how satisfied are you with your start to the season?

At the start I had slight muscular problems that have subsided. I wasn’t quite fit then, it’s getting better. Most recently, the trips with the national team were on.

Austria is tied with Norway in the Nations League at the top of the table. The German national team has not convinced recently. Is your team at eye level with the Löw-Elf?

It may have turned a little. At the ski season opener in Sölden, our people followed suit, and we are better at football at the moment, we have caught up a lot. The European Championship next year is our and my goal.

Werder Bremen: Florian Grillitsch did not expect the ex-club to crash

Let’s talk about Werder Bremen again. Did you expect your ex-club to crash the preseason?

No, especially not after the outstanding penultimate season. But it didn’t go well for Bremen from the start, they got into a negative run that developed a certain momentum of its own. I cheered, always hoped that they would get the hang of it. In the end I had to tremble badly, it got tight, but luckily it was enough.

And now Werder Bremen is seventh in the table even one place better than Hoffenheim. Enough warning for you and your team before the duel?

Of course, but not only because of the current status. I know from my own experience that it is never so easy for guests to play on the Weser. It was always difficult with the enthusiastic Werder fans in the stands. In these times, Bremen have to forego this support, but we shouldn’t underestimate our opponents.

There are currently more and more people infected with corona in the football industry, your team is currently affected. Do you have concerns that the season may have to be interrupted or even canceled?

I think the big problem is the many trips the teams make, be it the national teams or the clubs that are represented in the European Cup. There are good hygiene concepts everywhere, but the danger lurks above all in the national teams when players from all over the world come together. I hope everything will be fine. And I think there will be no break like in the spring.

The number of infected people is increasing and imposing restrictions in public life. Meanwhile, professional football is fighting for its existence – and the discussions are picking up again: Does football claim a special role for itself?

A little, I think. Professional football was one of the first areas in which there was a return to everyday life and normalcy, with some cutbacks. It was commendable that the Bundesliga designed a very good concept in times of pandemic. The German league was a pioneer for other divisions in Europe. (The interview was conducted by Hans-Günter Klemm)

Also interesting: You can watch Werder Bremen’s Sunday game against Hoffenheim live on TV and stream.

These were the details of the news Florian Grillitsch (TSG): “Hoped that Werder Bremen could take a curve” for this day. We hope that we have succeeded by giving you the full details and information. To follow all our news, you can subscribe to the alerts system or to one of our different systems to provide you with all that is new.