Coronel: “Then Albon will never be in a Red Bull again” 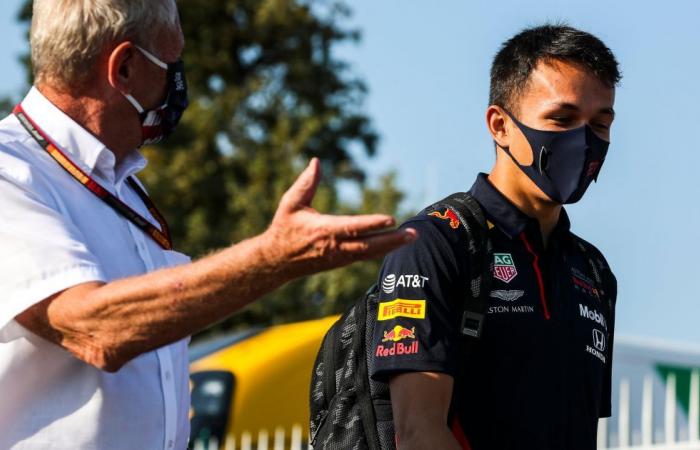 It is now well known that Alexander Albon does not know how to keep up with Max Verstappen at Red Bull. His performances are very disappointing, but for the time being he is clearly being held out by Helmut Marko, Christian Horner and the rest of the Red Bull management. Behind the scenes, the influence of the major shareholder of the energy drink manufacturer is present, according to the RacingNews365 podcast.

“If Albon has to leave Red Bull, he will go through the front door”, Formula 1 journalist Ruud Dimmers thinks. “The major shareholder of Red Bull is a Thai. Gasly was completely killed last year, but Albon is currently covered with the mantle of love at Red Bull. I have heard that this has a lot to do with the sensitivity within Red Bull. and by the Thai owners. “

The question remains: What should be done with Albon’s seat? Perez and Hulkenberg are an option, but will Albon go back to AlphaTauri in that case, or will he be shown the Formula 1 door? The strong performing Pierre Gasly and Honda junior Yuki Tsunoda seem to be favorites for the two AlphaTauri seats. Dimmers thinks Albon is going back to AlphaTauri because of Thai influences.

“If Albon leaves Red Bull and he goes to AlphaTauri, then Red Bull will allow Tsunoda to mature in Formula 2 for a year longer. If Albon does stay next to Verstappen, then the Japanese will drive at AlphaTauri, the journalist expects that a has a different opinion than Coronel, who thinks that Albon could lose his Formula 1 seat.

“I think Tsunoda is very important for the bike deal that Red Bull wants to make with Honda. They want to continue with that bike after 2021, with a number of people who belong to it, so that they eventually have their own bike. seat for Albon “, said the WTCR driver, who still manages to come up with a scenario in which Tsunoda and Albon both drive for AlphaTauri.

“Just keep Albon as a good reserve driver. Ultimately you have four seats to divide. If Tsunoda does not do well enough, you can alternate between Albon and him”, because everyone agrees on the other AlphaTauri seat. That’s for Gasly. “He is now flourishing and is one of the top three drivers of the current season,” said Dimmers.

If Albon stays with Red Bull, then according to Dimmers it will be because political motives were decisive. “Based on performance I consider the chance that Albon will continue to drive the Red Bull car in 2021 is zero. Based on politics I see it happening, but then the choice would come down to that,” said the F1- journalist, whose words are again waved away by Coronel.

“No, Albon will not be in the Red Bull next year. Marko is not in politics, it is good or not good. If Red Bull wants to become world champion, Albon will never be in a Red Bull again.”

This and many more topics are covered in depth in the latest RN365 podcast, which can be heard below. Tom Coronel, Ruud Dimmers and host Thomas van Groningen look ahead to the Grand Prix of Portugal.

*The article has been translated based on the content of Source link by https://racingnews365.nl/dan-zal-albon-nooit-meer-in-een-red-bull-zitten
. If there is any problem regarding the content, copyright, please leave a report below the article. We will try to process as quickly as possible to protect the rights of the author. Thank you very much!

These were the details of the news Coronel: “Then Albon will never be in a Red Bull again” for this day. We hope that we have succeeded by giving you the full details and information. To follow all our news, you can subscribe to the alerts system or to one of our different systems to provide you with all that is new.