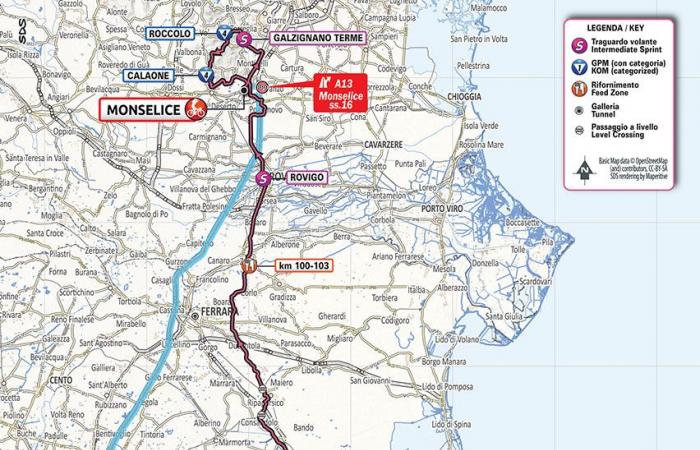 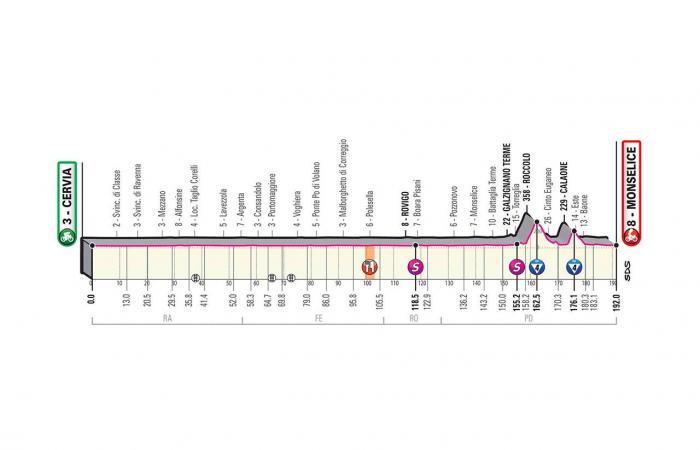 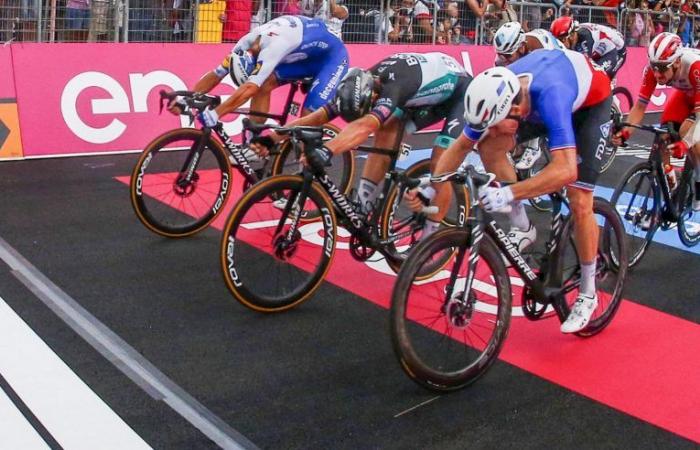 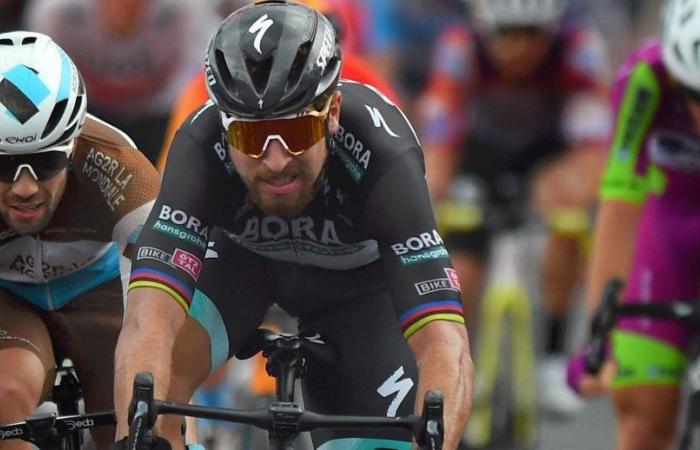 The stage from Cervia to Monselice is one of the last chances for the sprinters, at least those who survive the two vicious slopes in the final. To date, four times have been sprinted for the victory and each time Arnaud Démare has won. But the finale of this ride is much more suited to Peter Sagan. Cycling Flash looks ahead!

The Giro followed the Adriatic coastline for days, but on Friday the course turns away from the sea, when the route takes place from Cervia in Emilia-Romagna across the Po Valley to Monselice. For holiday lovers, the city in the Veneto region is the ideal base for visiting Venice and Padua, but has never been a stage in the Tour of Italy. The sprinters see here again an opportunity to compete for victory. 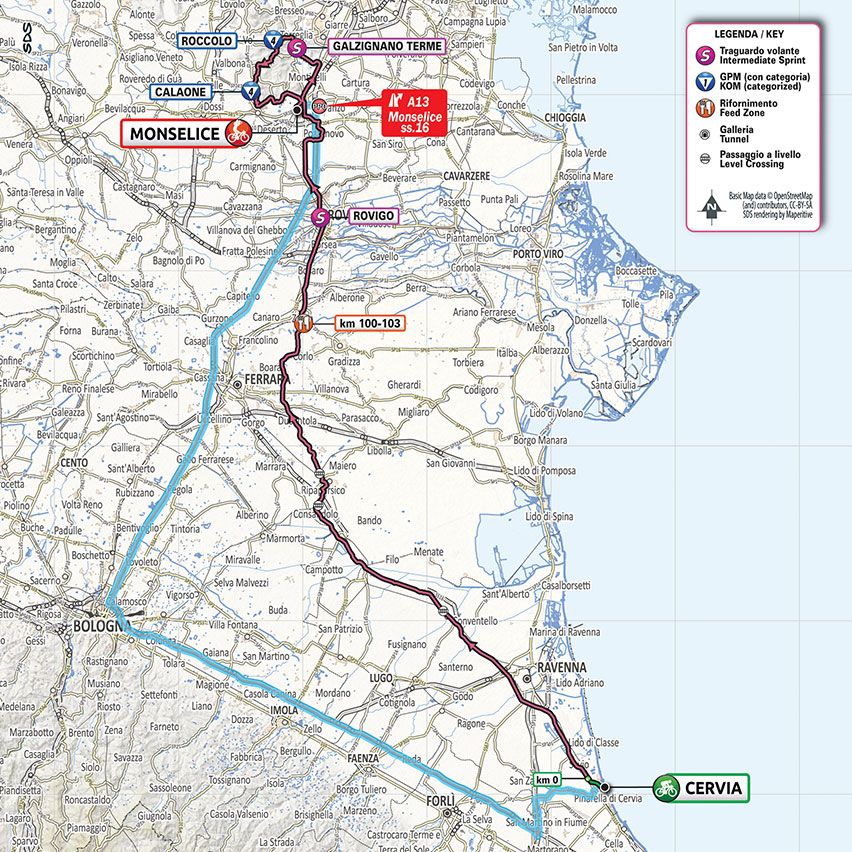 The stage starts in Piazza Garibaldi in the seaside resort of Cervia, after which the Adriatic Sea can be seen for the last time during the neutralization. A Giro ride started here twice before. In 1955 a time trial over 50 kilometers started here, preceded by Pasquale Fornara Coppi and Magni. After thirty years, Cervia was the departure point for a ride to Jesi, where Orlando Maini was the smartest of a leading group with six men.

Then the route goes inland via the Po Valley towards the Italian Alps, with the first 150 kilometers of billiards remaining. On the way, the riders will pass Ravenna, famous worldwide for its mosaics, and elegant Ferrara. Then one crosses the Po river at Polesella and enters the Veneto region. At that moment, the riders have covered 105.5 kilometers. After 118.5 kilometers, the intermediate sprint for the points jersey is in Rovigo.

When the peloton is 143.2 kilometers on the road, it will reach Monselice for the first time. However, this is followed by a spicy local lap of 48.8 kilometers, which is the final part of this thirteenth stage. The intermediate sprint was then drawn in Galzignano Terme for three, two and a bonus second. Then the first of two spicy calf biters is cut. 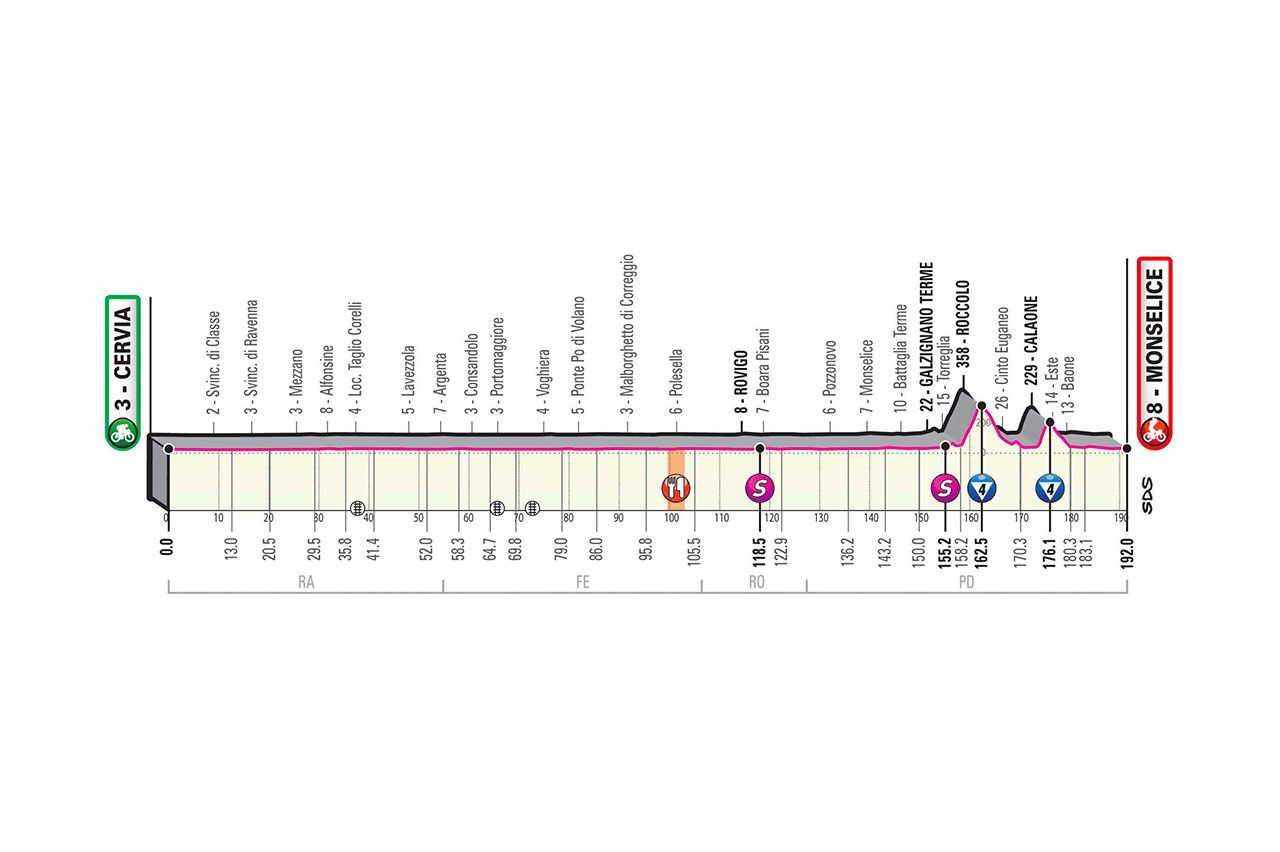 This climb to Roccolo (4.1 km at 8.3%, max. 20%) consists of three steps. First the Muro di Vallorto with a maximum slope of twenty percent, then the Castelnuovo and finally the real Roccolo with a maximum gradient of up to seventeen percent. The roads are quite narrow, but have good asphalt strips. Then it descends to the town of Cinto Euganeo and the route leads to the last obstacle of the day.

From Rivadolmo, the Muro di Calaone (2.1 km at 9.5%, max. 18%) is driven up. After the summit it is still 15.9 kilometers to the finish in Monselice. The two hills invite to attack, but are they heavy enough to unbalance the sprinters? Fast men with climbing legs like Peter Sagan normally have to survive here. The classification riders will probably keep their powder dry for the time trial to Valdobbiadene.

Will a refugee group manage to get home in this stage? Or do the sprinter teams check in the hope that their fast man survives the slopes in the final phase? Then we mainly look at Peter Sagan’s BORA hansgrohe. He will find a ride to his measure here and will undoubtedly see an opportunity to give his major competitor in the points classification, Arnaud Demare, a big pear.

We bet on the latter scenario, in which the strongest sprinters have their turn. However, a number of fast guys already seem hopeless from the start. Alvaro Jose Hodeg for instance. He finished third in Rimini, but the final was flat there. At Deceuninck-Quick-Step they will be playing the cards earlier in this Monselice Davide Dancers in Mikkel Honoré to pull. Those two must be able to survive the calf-biters in the final and possibly put the Sagans of this world on fire in the final straight line. Ballerini already tried that once in Villafranca Tirreno (see photo below), where he had to lay his thumbs for Demare and Sagan.

The absolute top favorite in this stage is, however Peter Sagan. After his impressive solo in Tortorento, his self-confidence has grown considerably. But Sagan did not yet win a direct duel against Demare in this Giro d’Italia. Does the Slovak put his teammates to work on the vicious climbs to throw the French champion overboard? Also in his hunt for the points jersey, this would of course be the ideal scenario for Sagan, because he still has a serious gap to bridge at Demare. That is why we award him four stars this time.

Still we want to Arnaud Démare do not write off in advance. The Frenchman has won the last four sprints in this Giro (Villafranca Tirrena, Matera, Brindisi and Rimini) and he is also bursting with confidence. In addition, he was able to rely on a strong lead-out in the first week, although Benjamin Thomas and Ramon Sinkeldam have since dropped out. But the Groupama-FDJ men will undoubtedly go all out to get Demare over the slopes so he can take a shot at a fifth win. The fact that there is still 15 kilometers to cover after the last climb is an advantage.

Mikkel Bjerg this Giro got the chance to smell and discover itself in a big round. The young Dane is seizing that opportunity with both hands for the time being. In the opening time trial he was third, just like in the mountain stage to Roccaraso. In Vieste he only had to leave Matthews and teammate Gaviria in the peloton sprint for seventh place. He may be able to surprise in Monselice and still book a victory in his debut year with the big boys.

Then there is a lot of riders who can ride a short result on a good day. Think of Andrea Vendrame, who was already fourth in Villafranca Tirrena and sixth in Matera. Or on Fabio Felline in Juan Sebastian Molano, numbers three and four in Matera. Diego Ulissi did not achieve top results after his stage victory in Agrigento, but perhaps the Italian has set his sights on this stage. Finally, we also give Gianluca Brambilla another star. For the time being he did not get any further than a place of honor in Agrigento, but if he survives and can sprint for a win, we should not be able to erase the Italian from Trek-Segafredo. Also Davide Cimolai (Israel Start-Up Nation) en Enrico Battaglin (Bahrain-McLaren) can survive a slope.

Sprinters like Elia Viviani and Fernando Gaviria are in the same boat as Alvaro Hodeg. They will probably not survive the collets, even if there is still 15 kilometers to go after the last obstacle.

The weather forecast for Friday’s stage is slightly better than that of the stage with start and finish in Cesenatico, but there is no question of a holiday weather either. It will not get more than fifteen degrees, and the chance of rain is particularly high again, varying from an 85 percent chance of precipitation at the start in Cervia to a 70 percent chance in arrival city Moncelice. Although it will not fall from the sky like Thursday. There is also hardly any wind.

This 13th stage of the Giro d’Italia can again be followed live on Eurosport 1 and through the Eurosport Player. Sporza and NOS do not have the broadcasting rights this year either.

These were the details of the news Giro 2020: Preview of the thirteenth stage to Monselice for this day. We hope that we have succeeded by giving you the full details and information. To follow all our news, you can subscribe to the alerts system or to one of our different systems to provide you with all that is new.