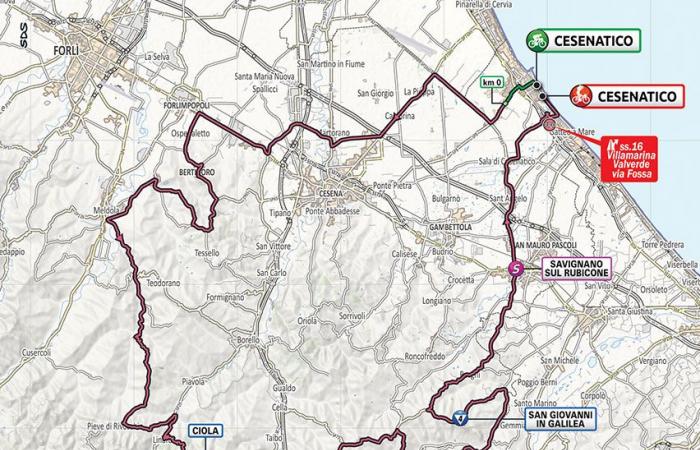 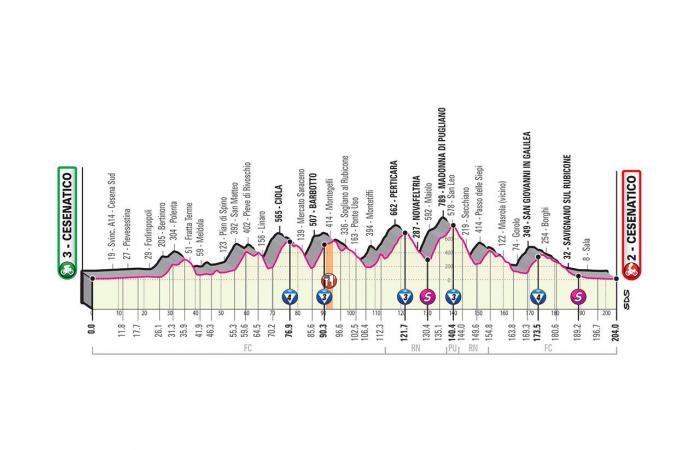 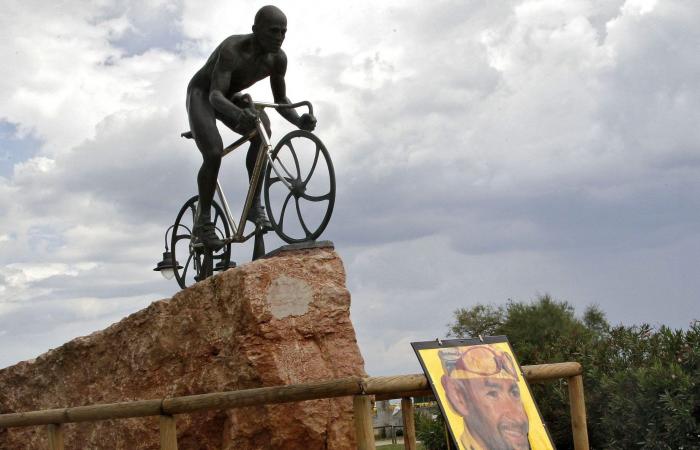 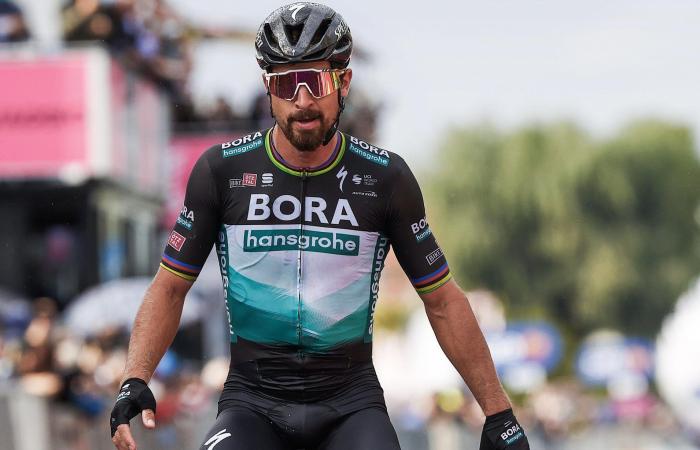 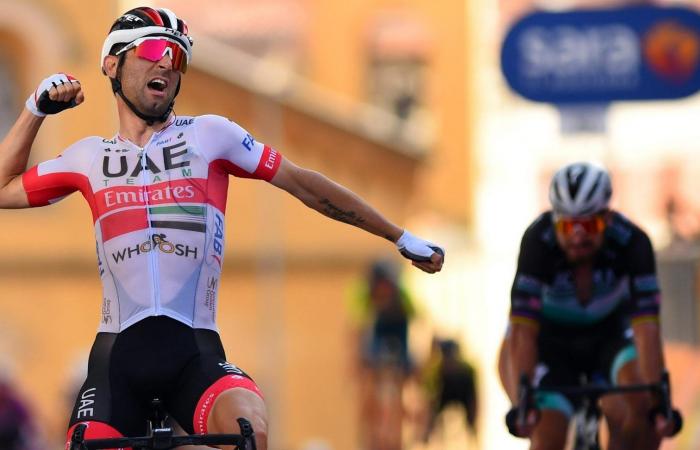 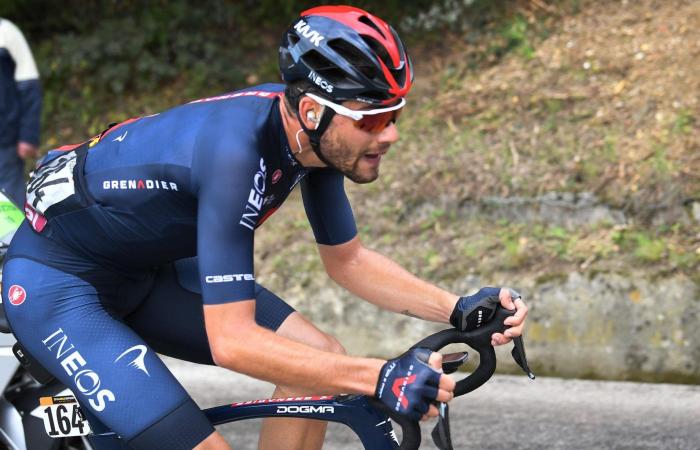 We are halfway through the Giro d’Italia. Before the sprinters can indulge themselves again on Friday, it will be the turn of the daredevils again in the 12th stage. Who honors Marco Pantani in the streets of Cesenatico? Cycling Flash previews the race route and the favorites for the overall victory!

After the eleventh stage already ended in touristic Rimini, the twelfth stage continues in the Emilia-Romagna region. The start and finish line are in Cesenatico, the residence of the bald climber Marco Pantani, who died early. 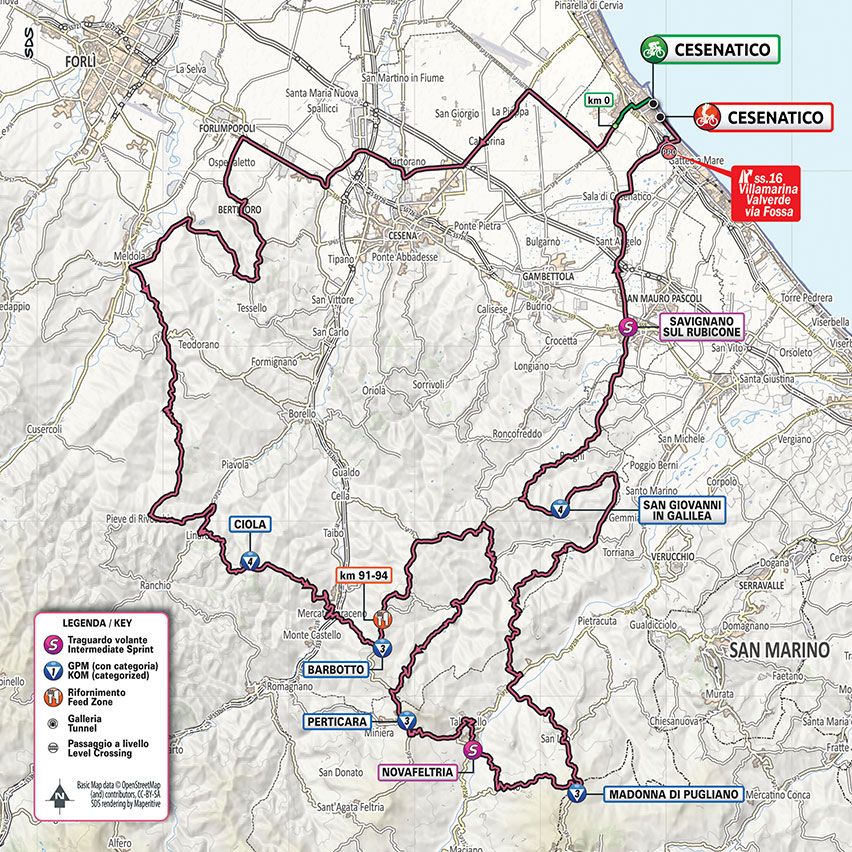 At his funeral in 2004, more than ten thousand interested people brought Il Pirata to his final resting place, crying and screaming. They crowded with flags, flowers and posters at San Giacomo Church and along the route to the cemetery. Since 2004 the Memorial Marco Pantani has been held annually in Cesenatico. There was also a museum, Spazio Pantani, and a monument was erected on the beach in memory of his short, intense life.

The stage follows almost the same route as the Gran Fondo Nove Colli, the oldest gran fondo in the country. In the first edition, in May 1971, a group of seventeen men started the adventure early in the morning, which started at the wine bar Bar del Corso. Afterwards the popularity increased enormously and nowadays there is a limit of twelve thousand participants. The fiftieth edition was normally held in May, until the corona virus threw a spanner in the works.

The signing in is done at the beach, after which we head west towards Cesena. The first 25 kilometers are flat, but from Forlimpopoli the route goes up and down continuously. First, the race looks for the hills of Polenta and San Matteo, after which in Ciola (6.0 km at 6.4%, max. 12%) the first mountain points can be earned after 76.5 kilometers. After 90.3 kilometers, the Barbotto (4.5 km at 8.4%, max. 17%) left the route. 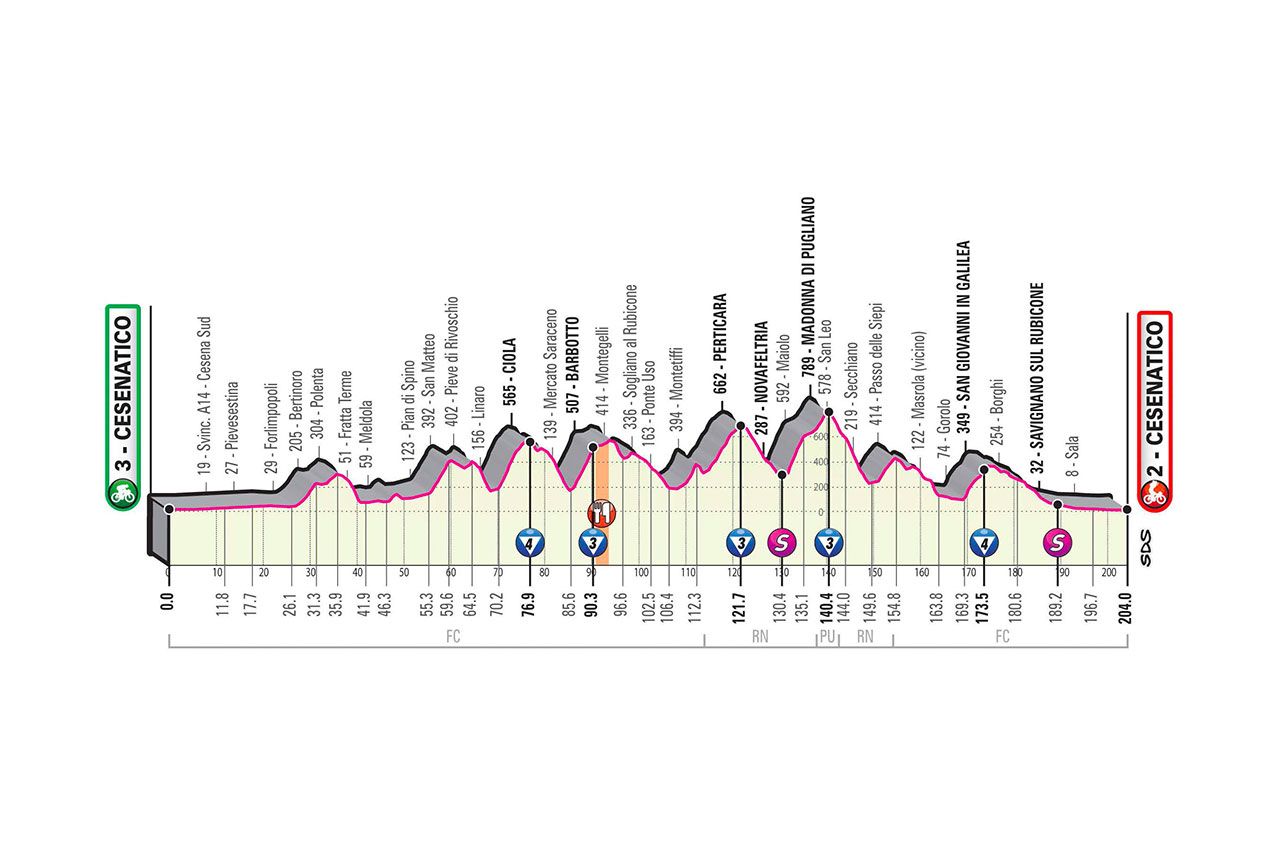 The first calf-biters will already have the riders in their legs when they start the climb to Perticara (8.1 km at 4.7%, max. 12%). After 121.7 kilometers the top is reached and a descent to Novafeltria follows, where after 130.4 kilometers the intermediate sprint for the points classification will take place. The first eight get points, but bonuses can only be earned later in the stage.

The next climb will arrive at lightning speed, the Madonna di Pugliano 3 (9.1 km at 5.5%, max. 12%). After 140.4 kilometers, the top of the longest climb of the day is rounded. San Marino is a stone’s throw away, but the course ignores the hilly dwarf state. For the last sixty kilometers of the stage we will drive back to the coast, to Cesenatico.

That does not mean that the climbing is over. First, the drivers cross the Passo delle Siepi before starting the Gorolo (4.4 km at 6.3%, max. 14%) to San Giovanni in Galilee. Once the top has been reached after 173.5 kilometers, all altitude meters for this day have been made and the last 25 kilometers flattened. After the descent, Savignano sul Rubicone, after 189.2 kilometers, is the intermediate sprint where three, two and a second can be earned.

The last time the Giro arrived in Cesenatico was in 2010. For Manuel Belletti a childhood dream came true when he triumphed in front of the statue of his fellow countryman Marco Pantani. The Italian from Colnago-CSF Inox cried tears of happiness and spoke emotional words of poignancy for his deceased hero. Other winners in Cesenatico include Ivan Quaranta, Rudi Altig and Pietro Giudici.

There is a very good chance that it will be price again for the attackers on Thursday. The final that can perhaps be compared to that of Liège-Bastogne-Liège. And if the weather conditions follow the predictions, this stage with start and finish in Cesenatico could well turn into a knockout race in which the remnants of a large group of attackers will break up.

So we have to look out for riders who are a bit further in the rankings, have no problems digesting the hills and if necessary have a tough sprint. We quickly end up with men in shape Peter Sagan in Diego Ulissi. How Sagan got his hands on the stage to Tortoreto on Tuesday was unadulterated class. It doesn’t seem to us that Sagan’s hunger will be satisfied yet. Moreover, with a similar scenario he can again do a good thing in the points classification. Ulissi, the Italian UAE Emirates puncheur, has already won a stage in this Giro and is able to survive such a final.

Next contender on our list: Filippo Ganna. The time trial is only two days later, so the world champion against the clock can really afford to test deep in the power arsenal in Cesenatico. We remember his victory in Camigliatello Silano, where he impressed. Provided the necessary motivation, this patented Team Ineos speed skater is always a contender on this ride.

Giovanni Visconti needs no further introduction. The 37-year-old hijacker is now racing for Vini Zabù-KTM, but is certainly not worn out yet. We only have to go back a week, when the Italian finished second on Mount Etna. Then the Ecuadorian climber Jonathan Caicedo was still too strong, does the Italian have more luck on Thursday? Then he will first have to maneuver himself into a position where he has a chance of winning.

Diego Ulysses – Foto: You have heart

Also a Portuguese in our list this time. One we saw stunting in Roccaraso a few days ago: Ruben Warrior, who is undoubtedly cycling around on a pink cloud. The EF Pro Cycling class has proven to be able to climb, but also has the necessary explosiveness and is not slow after a tough race.

We are also our belief in Mikkel Bjerg not lost. The Danish speed rider continues to discover himself in this Giro. Not as a time trial rider, because we now know how fast Bjerg can ride a time trial bike. But the fact that the youngster of UAE Emirates finished third in Roccaraso on Sunday can be considered a surprise. In Vieste he already showed that he is not slow when it comes to sprinting.

We already mentioned Filippo Ganna as the candidate winner, but they actually have a few contenders at Team Ineos Grenadiers. Due to Geraint Thomas’ failure, those boys get a role as a freebooter and they have fulfilled it perfectly in the past week and a half. Ben Swift, Tao Geoghegan Hart, Jhonatan Narvaez in Jonathan Castroviejo, each one is able to play a significant role in a stage like this one to Cesenatico. This time we chose Swift and Geoghegan Hart.

To be the last riders with a star Ben O’Connor in Thomas De Gendt. We think O’Connor is still looking for a new contract, so he will not be afraid to put himself in the spotlight in such a stage. And De Gendt continues to look for a first stage victory. By the way, there are still a lot of outsiders who can score on a good day. Think of Davide Villella, Salvatore Puccio, Jan Tratnik, Nicola Conci, Simon Clarke, Fabio Felline or Valerio Conti.

Meteovista predicts a drizzly Thursday with an 80 percent chance of precipitation in Cesenatico and the surrounding area. The average temperature fluctuates around thirteen degrees Celsius at noon, in the afternoon it will be a maximum of sixteen degrees. The wind is also not to be underestimated in this typical autumn weather

The twelfth stage of the Giro d’Italia can now again be followed in full live on Eurosport 1 and via the Eurosport Player. Sporza and NOS do not have the broadcasting rights this year either.

These were the details of the news Giro 2020: Preview twelfth stage around Cesenatico for this day. We hope that we have succeeded by giving you the full details and information. To follow all our news, you can subscribe to the alerts system or to one of our different systems to provide you with all that is new.