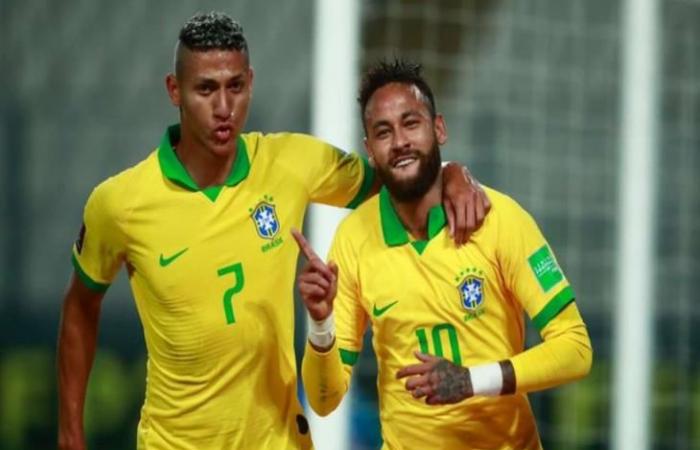 The famous Brazilian striker Neymar da Silva scored three goals (hat-trick) to lead his country to overturn a clean goal for a 4/2 win over its host Peru on Tuesday night (Wednesday morning GMT) in the second round of the South American qualifiers for the World Cup 2022 in Qatar.

The Brazilian team raised its score to six points from two successive victories, to top the qualifying table by goal difference only against its Argentine counterpart, while Peru’s balance was frozen at one point from two matches.

The first half of the match ended in a 1/1 draw, as the Peruvian team took a very early goal scored by Andre Carrillo, the Saudi star of Al Hilal, and the Brazilian team drew with a goal scored by Neymar da Silva from a penalty kick in the 28th minute.

In the second half, the Peruvian national team advanced again with a goal scored by Renato Tapia in the 59th minute, and Richarlson tied for Brazil in the 64th minute.

And the Brazilian team pressed at the end of the match to score two more goals, which they achieved through two other goals for Neymar in the 83rd minutes from a penalty kick and the fourth in stoppage time to complete the hat-trick and share the top scorers’ list with both Peruvian Carrillo and Uruguayan Luis Suarez with three goals each. .

The match saw Carlos Zambrano being sent off from Peru in the 89th minute, just three minutes after his colleague Carlos Caseda was sent off while he was on the bench.

The two teams made a good performance in the first half without any of them succeeding in imposing their control over the course of the game, as the game came to an argument between them during this half and the result of the half was expressed in a 1-1 draw.

The match started with offensive skirmishes from the two teams that did not pose any real danger in the first five minutes of the match.

But the Peruvian national team surprised its Brazilian guest with a goal in the sixth minute through Andre Carrillo.

The Brazilian team also received another shock in the first minutes, as coach Tite made an emergency change in the 12th minute by dropping Rodrigo Caio instead of Marquinhos due to injury.

The Brazilian team tried to respond and scored the equalizer and had a golden opportunity after a swift attack and a long pass that Casemiro had headed to his teammate Roberto Firmino, who was rushing into the penalty area, but Pedro Galici, the Peruvian goalkeeper, brilliantly responded to Firminos ball before the defense dispersed it.

Amid the Brazilian team’s attempts to respond and score the equalizer, the Peruvian team nearly snatched the second goal after a quick, organized attack in the 23rd minute, but the Brazilian goalkeeper countered this attempt steadfastly to preserve his team’s chances of returning to the match.

The response came harshly from the samba dancers, as Neymar got a penalty kick in the 26th minute after an organized attack by the team, the Peruvian defense failed to deal with it, and Neymar was pulled from the playing shirt by Yoshimar Yoton inside the penalty area, so the referee did not hesitate to count it as a penalty.

Neymar hit the penalty kick very quietly to the right of the goalkeeper to equalize in the 28th minute.

Neymar scored another goal for Samba in the 30th minute, but the referee canceled it for offside.

The Peruvian national team gradually regained its balance, while the Brazilian team retreated to the defense, and the Peruvian team took advantage of this retreat and intensified its offensive attempts in the following minutes, as it manipulated the Brazilian defense, but without forming a real danger on Wiverton’s goal.

Casemiro responded with a powerful free kick from distance in the 38th minute, but it went within the goalkeeper’s reach.

The Brazilian team was lucky in the 41st minute, as Renan Lodi passed a typical high ball from the left, and Firmino hit it with a powerful header, but the ball passed like an arrow outside the post.

Galisi advanced into the penalty area in the 44th minute to cut off a dangerous swift attack by the Brazilian team, ending the first half with a positive draw.

And the Peruvian national team began the second half with remarkable offensive activity, but it collided with the defense organization by the guests.

The Brazilian team quickly returned to exchange its host for offensive attempts, and Neymar demanded a penalty kick in the 53rd minute, claiming to be blocked, and the Peruvian players demanded that the player be warned for alleging obstruction, while the referee indicated that the play would continue.

The two teams continued to exchange attacks in the next minutes, and Peru’s attempts resulted in the lead goal in the 59th minute.

The goal came when the Samba defense tried to remove the ball from the penalty area and set the ball to Renato Tapia, who was motivated in front of the penalty area, who struck the ball directly towards the goal to pass between the feet of substitute Caio and hit his foot during its passage to change its direction slightly and deceive the goalkeeper and settle in the goal to the left of the box.

The Brazilian team began the journey of searching again for the equalizer and its players were most in possession of the ball in the following minutes, with the Peruvian national team retreating to the defense.

The Brazilian team did not delay in achieving its goal, as it scored the equalizer in the 64th minute, signed by Richarlson.

The goal came as a result of a corner kick from which the ball reached Firminos head, who played it towards the goal and the goalkeeper tried to remove it to no avail, then Richarlson completed it into the goal, scoring the equalizer.

The referee stopped the match for about three minutes in order to confirm the correctness of the goal through the video assistant referee (VAR) system, and then confirmed the goal.

The two teams continued their struggle in the match, hoping to win, and the match witnessed frequent skirmishes between Neymar and the Peruvian national team, but the referee intervened at the right time more than once, even if he was satisfied with warnings.

The Brazilian team took advantage of a quick counter-attack in the 80th minute and won a penalty when Neymar was pushed by Luis Abram in the middle of the penalty area.

Neymar hit the penalty kick after the wave of protest by Peruvians against the referee’s decision subsided, and Neymar played the ball quietly again to the right of the goalkeeper and out of his reach, to be the goal of progress in the 83rd minute.

The nerves of the Peruvian players became strained after the Brazilian goal, prompting the referee to expel Carlos Cassida in the 86th minute while he was between the substitutes.

Then the violent interference and hitting the hand in the face of the player, Richarlson, led to a warning Carlos Zambrano, but the referee returned and expelled the player from the match in the 89th minute after reviewing the incident through the (Var) and making sure that he deliberately hit the opponent.

But Neymar and his companions were not satisfied with this victory, as Neymar scored his third goal (hat trick) in the fourth minute of stoppage time from a good follow-up after a quick attack by the team and substitute Ribeiros shot off the post to put Neymar into the goal without bothering to end the meeting with a great victory for Brazil.

These were the details of the news Neymar hat-trick gives Brazil a dramatic victory over Peru for this day. We hope that we have succeeded by giving you the full details and information. To follow all our news, you can subscribe to the alerts system or to one of our different systems to provide you with all that is new.