Rafael Nadal: the best tennis player of all time? 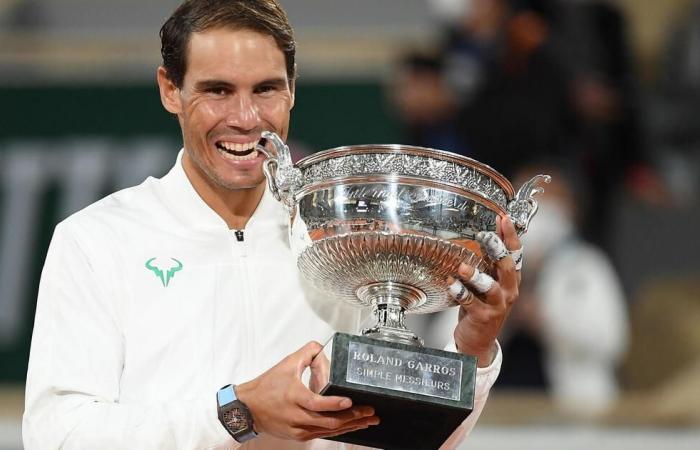 With his 13th tournament victory at the French Open, Rafael Nadal got himself talking about potential “GOAT”, “The Greatest of All Time”, best (tennis) player of all time. Only the recurring, but never proven doping allegations still scratch his image.

Even opponents Novak Djokovic was full of respect after Rafael Nadal last Sunday the final of the French Open won. “He was unbelievable and played a perfect match,” praised the Serb.

Nadal had once again honored his reputation as “King of the Clay Court”. He won that for the 13th time Grand Slam tournament from Paris, has thus expanded his record.

But that’s not all: with his 20th Grand Slam victory, Nadal drew level with Swiss Roger Federer. No tennis player ever won more majors. The Spaniard is one of the most successful players of all time and could perhaps even go down as the best in history.

His hunger for success is still great. “I’ve never made a secret of the fact that I want to end my career as the player with the most Grand Slams. I want to go my way for that,” he says 34 year old.

Boris Becker praises: Rafa is out of this world

The tennis legends are full of respect. “There won’t be a player like that again. Rafa is out of this world,” said Eurosport expert Boris Becker. Federer also congratulated on Instagram: “It’s really unbelievable that he’s now incredible 13 times Roland-Garros won has, that’s one of the greatest achievements in sport. “

But what are the characteristics of Nadal? His uncle Toni Nadal, who shaped Rafa when he was young, says about the qualities of his nephew: “Rafael has a great drive, one very good backhand and like no other, can go out difficult Positions the Place the ball well. And then he has a good character too! “

What does he mean by that? “Rafael knows that he is an excellent tennis player. But he also knows that he doesn’t have to feel special about it,” reveals Toni Nadal in an interview with the “Blick”. “Rafael was always smart enough to let the adults with life experience guide him at the right moment. That’s why he is Fame or Money never went to your head.”

Perhaps that is one of the reasons why he was never permanently affected by setbacks.

Last year Nadal had to struggle with repeated injuries.

At the beginning of the 2019 season he suffered from Thigh problems, then under Wrist pain. In March 2019 he had to because of a Knee injury even the semi-final duel of Indian Wells cancel against Federer. “That was the worst moment,” recalls Nadal.

19 years of professional tennis leave their mark. “To be honest, I never thought of playing tennis at my age,” he said in an interview with the AS. “I was always told that my playing style wouldn’t have a long career. At some point I believed in it too and thought that I would be retired and have a family.”

Rafael Nadal is an outstanding tennis player. Here you can see his best strokes since 2003. © YouTube

But, as is well known, things turned out differently.

One reason for long-term success is that Load control. “I think in the last few years I have learned to play well with fewer matches,” he told the “Blick”.

He also has the ability not to need a longer start-up time after injuries. On the contrary: he often came back even stronger than before from injury breaks.

Also read: “Barbaric” plans: the defending champion does not participate in the US Open tournament

With these almost superhuman achievements, some people asked themselves: Is there any right thing to do?

In March 2016, the French sports minister threw Roselyne Bachelot dem Tennis-Star Doping in front. “We know that Rafael Nadal’s injury, for which he was sidelined for seven months, was because he tested positive on a doping control,” she said at the time.

But she couldn’t prove it. Bachelot was found guilty of defamation and had to 10,000 euros fine numbers.

The fact is: Nadal has never been shown to have taken illegal substances. Nevertheless, the allegations persist.

“Rafael Nadal has shown some abnormalities,” said doping expert Fritz Soergel At the beginning of this year at “Sport1”. “I have a permanent suspicion. Regarding regeneration and his entire athleticism. In addition, he is also from Spain is coming, a country that isn’t exactly known for following its heroes very closely. Anabolic substances would be the candidates. “

And how does Nadal deal with these allegations himself? “I’ve heard many times that my person has been linked to doping,” he said before the 2016 Indian Wells tournament. “I’m tired of talking about it. I’m perfectly clean and a fair sportsman.”

If that’s true, he might really one day be the best tennis player ever go down in history.

The Spanish world number one Rafael Nadal suddenly gets scared in his second round match in Melbourne against the Argentine Federico Delbonis. But it has nothing to do with his opponent.

These were the details of the news Rafael Nadal: the best tennis player of all time? for this day. We hope that we have succeeded by giving you the full details and information. To follow all our news, you can subscribe to the alerts system or to one of our different systems to provide you with all that is new.