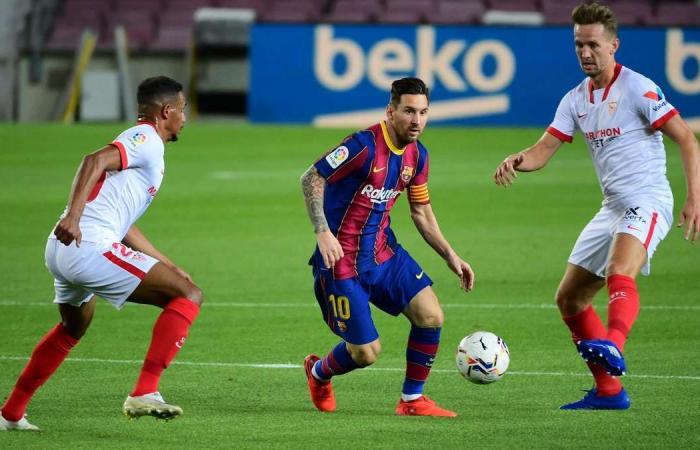 Thank you for your reading and interest in the news Lionel Messi 7, Ansu Fati 7, Philippe Coutinho 6: Barcelona player ratings v Sevilla and now with details

Hind Al Soulia - Riyadh - BARCELONA PLAYER RATINGS: Neto. 5 – Had little to do other than pick the ball out of the back of the net in the first half. He could do little to stop Luuk de Jong’s thunderous effort, though he did get a hand to it. Was quick off his line to sweep up when needed. On one occasion he almost got caught in possession by Rakitic when attempting a drag back under pressure. Reuters

Sergi Roberto. 6 – Solid distribution throughout and, as ever, loved to get forward. Barca’s attacking play was predominantly down the left hand side, but he was always available, and his crossing was a danger all game. Reuters

Ronald Araujo. 5 – Came in to replace former Sevilla man Clement Lenglet and struggled to keep up with Suso and Ocampos at times. His pin-perfect long ball set Griezmann free early on in the second half. He came close to scoring an own goal when he deflected the ball onto his crossbar. Getty Images

Gerard Pique. 6 – A busy evening for Pique who had to establish a relationship with Araujo and was under pressure from the Sevilla press all game. Showed tremendous positional sense throughout to win virtually every header. AFP

Jordi Alba. 5 – Tried to catch out Bono with a free-kick but his effort finished wide. Was sometimes caught out by Sevilla’s pace on the break and left the field injured before the end. AFP

Sergio Busquets. 6 – The master of keeping possession even when pressed, Busquets is accustomed to the kind of pressure applied by the Sevilla midfield. Still, it was an evening of tight margins and few spaces, and he hardly had a moment to think before he was closed down. He did well to block a cross from Ocampos with Sevilla on the attack, and then enjoyed a few forays forward towards the end. Getty Images

Frenkie de Jong. 5 – The Dutchman was constantly pressed and found it hard to find any consistency, though he did well to link defence and attack. He ventured forward in the closing minutes and came close to converting a Busquets cross. EPA

Philippe Coutinho. 6 – The Brazilian’s fine form continued as he found himself in the right place at the right time to seize on Jesus Navas’ mistake and level the scores. Linked well with Fati on the left, though drifted out of the game as it wore on and was later substituted. EPA

Lionel Messi. 7 – The Argentine was involved in Barca’s equaliser; he sent a delicious ball towards Alba that caused confusion in the Sevilla defence, and enabled Coutinho to fire home. Played in a deep-lying role to try and get his side going, he came close to scoring before the break when he cut in front the right hand side and again with a low effort from range in the second. Was brought down in the area several times towards the end but wasn’t rewarded with a penalty. AFP

Ansu Fati. 7 – The in-form youngster exuded confidence early on with a number of neat flicks coming in from the left hand side. His first shot on goal was comfortably saved by Bono. His final ball sometimes let him down, but he looked a constant threat when running at the Sevilla defence before he was substituted. Reuters

Antoine Griezmann. 5 – The Frenchman twice came close to scoring in the first half; first with an acrobatic effort that saw him penalised for using a high foot, and again when through on goal, but his first touch was heavy and he was slow to get his shot away. Similarly, when through on goal after the break, he took a heavy touch and missed the opportunity to fire at goal. Looked short of confidence. AFP

SUBS: Pedri (Fati 60) 5. – The 17-year-old did little to change the game when he came on, though he will have loved the opportunity in such a big game. AFP

Trincao (Griezmann 60). 6 – Enjoyed a foray down the right 10 minutes after coming on but his cross to the far post was cleared for a corner. Then had a glorious chance to win it cutting in from the right but his shot was saved. EPA

Miralem Pjanic (Coutinho 75). N/A – Made his presence felt with a thundering challenge soon after coming on. Getty Images

Sergino Dest (Alba 75). N/A – The first American player to play for Barcelona’s first team and the fifth US international to play in La Liga, he looked lively when he came on and set up Messi for a strike at goal from 25 yards. AP Photo

These were the details of the news Lionel Messi 7, Ansu Fati 7, Philippe Coutinho 6: Barcelona player ratings v Sevilla for this day. We hope that we have succeeded by giving you the full details and information. To follow all our news, you can subscribe to the alerts system or to one of our different systems to provide you with all that is new.