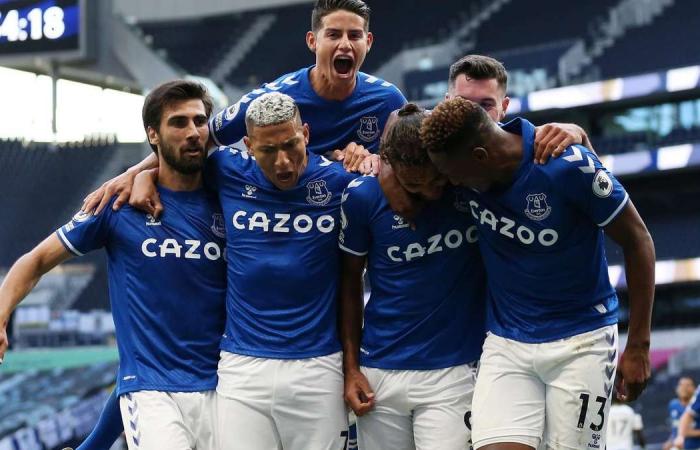 Thank you for your reading and interest in the news James Rodriguez 8, Seamus Coleman 9; Harry Kane 4: Tottenham v Everton player ratings and now with details

Hind Al Soulia - Riyadh - TOTTENHAM RATINGS: Hugo Lloris - 5: Didn't have much to do, and had no chance with Everton's winner. Reuters

Matt Doherty - 5: One attacking foray almost led to a goal but was otherwise put in the shade by his opposite right-back Seamus Coleman. Reuters

Eric Dier - 6: A couple of timely blocks to deny Richarlison from getting on the scoresheet. AFP

Toby Alderweireld - 5: Beaten by Dominic Calvert-Lewin in the air for the winner and looked on shaky ground throughout. Reuters

Harry Winks - 5: Him and Hojbjerg looked too similar in a dysfunctional centre midfield pairing. AFP

Pierre-Emile Hojbjerg - 5: Dane was happy to get stuck in but failed to make an impression on his Spurs debut. EPA

Dele Alli - 6: Stung the hands of Pickford with a lightning quick counter and then was inexcusably hooked at half time by his manager. EPA

Lucas Moura - 6: Flashes of good play from the Brazilian attacker but none of them in areas that hurt Everton. EPA

Son Heung-min - 5: The South Korean may still be in Seamus Coleman's pocket. Reuters

Harry Kane - 4: Hard to remember the Tottenham striker touching the ball in the second half and hardly littered the first 45 with memories either. AFP

SUBS: Moussa Sissoko (on for Alli) - 5: Frenchman tried to offer drive from midfield but to no avail. AFP

Steven Bergwijn (on for Winks) - 5: Instructed to hog the touchline by his manger when the dangerous Dutchman might have been better deployed supporting Kane. Reuters

Tanguy Ndombele (on for Doherty) - 4: Frenchman's impact was negligible. EPA

EVERTON RATINGS: Jordan Pickford - 7: Pulled off quality saves to deny Alli and Doherty in the first half. Reuters

Michael Keane - 6: A comfortable afternoon for the Everton centre-back. AFP

Allan - 8: The least venerated of Everton's midfield signings but the Brazilian was a colossus protecting the back four. AFP

Abdoulaye Doucoure - 6: Solid if unspectacular debut for the Frenchman. Snuffed out one dangerous Spurs attack in particular in the first half. AFP

James Rodriguez - 8: Caressed the ball from right to left as if running his fingers through a lover's hair. Never looked in danger of beating Davies for pace, but then he never looked like he had to. EPA

Andre Gomes - 8: Much was made of the three midfield debutants, but the Portuguese was pure silk before being replaced on 68 minutes. Reuters

Richarlison - 7: It's no exaggeration to say the Everton forward should have bagged a hat-trick. The Brazilian was plenty wasteful, but it speaks to his character that he never went missing. AFP

Dominic Calvert-Lewin - 7: Hardly involved in the first half but grew in stature in the second. The way he got between the two Spurs centre-backs to score his header was reminiscent of his coach, Duncan Ferguson, in his pomp. Reuters

Tom Davies (on for James) - NA: Brought on to eat up the clock. AFP

Moise Kean (on for Calvert-Lewin) - NA: No time for the striker to impose himself on the match. EPA

These were the details of the news James Rodriguez 8, Seamus Coleman 9; Harry Kane 4: Tottenham v Everton player ratings for this day. We hope that we have succeeded by giving you the full details and information. To follow all our news, you can subscribe to the alerts system or to one of our different systems to provide you with all that is new.