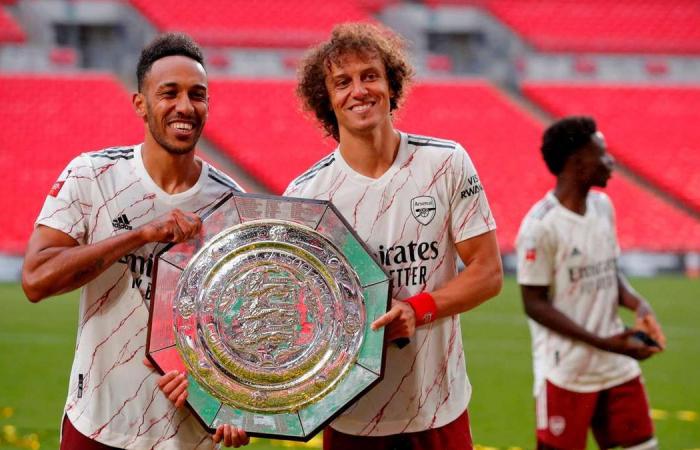 Hind Al Soulia - Riyadh - ARSENAL RATINGS: Emiliano Martinez – 7, Stood up well to win a one-on-one with Sadio Mane to keep Arsenal ahead, and stopped the same player late on, too. AFP

Hector Bellerin – 6, He made an important block from a Andy Robertson cross in the first half, and just about survived the Scot’s frequent raids down his flank. AFP

David Luiz – 6, Often lax in possession, occasionally out of position, and generally appeared to earn little confidence from those around him. Struck his spot kick well, though. AFP

Rob Holding – 6, Perhaps no surprise that Sane would beat him in a foot race. The fact he did so in the air, too, might be cause for concern. AFP

Kieran Tierney – 7, Maybe not quite the impact of his compatriot Robertson on the other side of the field, but impressive enough. Reuters

Ainsley Maitland-Niles – 8, Diligent in defence to stub out a number of Liverpool attacks, particularly when Mane was breaking. Coolness personified for his penalty. A decent way to celebrate his 23rd birthday. EPA

Mohamed Elneny – 6, Maybe surprising he is back in the Arsenal line up, but, whatever the future holds, he was happy to dig in for the team here. Reuters

Bukayo Saka – 8, His crossfield pass freed Aubameyang for the opener, and he forged more openings for teammates in a bright first half display. AFP

Eddie Nketiah – 5, Blazed a good shooting chance over, and later suffered some rough treatment from Milner and Keita. Reuters

Pierre-Emerick Aubameyang – 7, Arrowed in a fine finish for his 12th minute goal, and the winning penalty was unstoppable. EPA

SUBS: Cedric (Bellerin, 52') – 5, Struggled when he came on, with a foul on Minamino and unable to clear for the equaliser, but he did his bit in the shoot out. Reuters

Joe Willock (Saka 82') – 5, Wasted a golden chance to win the game for the London side when he headed wide when unmarked. Reuters

Sead Kolasinac (Tierney 83') – NA, All he had time for was to get fouled, but at least he earned an appearance fee. Reuters

LIVERPOOL RATINGS: Alisson Becker – 6, Underemployed during the 90 minutes, other than a test at a corner, but did not get near any of Arsenal’s shots in the shoot out. EPA

Neco Williams – 5, The highly regarded young right-back was found out of position on occasion, which allowed Aubameyang to roam. AFP

Joe Gomez – 7, Had little to bother him after starting at centre-back, but was unable to provide much impetus when he was moved to right-back. EPA

Virgil van Dijk – 6, Had the ball in the net early on, but his goal was chalked off for offside at a free kick. Rusty in possession on occasion. EPA

Andy Robertson – 8, The most dynamic force on either side in the first half. Rained in crosses throughout, which Arsenal had to be at their best to repel. AFP

Fabinho – 6, Looked untroubled both when holding the midfield, or when he dropped back to centre-back in second phase, and netted his spot kick. EPA

James Milner – 5, The veteran wasted a good heading chance early in the piece. His second-half booking felt like it was a long-time in the making. EPA

Georginio Wijnaldum – 7, Tireless. Even raced off the field when subbed in injury time – no doubt delighted he had been spared the prospect of penalties. Reuters

Mohamed Salah – 6, Quiet, other than one exquisite pass to create a crossing chance for Robertson in the first half, and similar in the second. Made no mistake with his penalty. AFP

Sadio Mane – 7, The brightest of Liverpool’s front three. He spurned a good heading chance from an appetising Robertson cross early on. EPA

Roberto Firmino – 6, Remains goal shy, although he did go close with a shot from range in the second half. Looked brighter than he did at the end of last season. AFP

SUBS: Naby Keita (Milner 59') – 6, Hustled and bustled when he came on for Milner, without making any appreciable inroads. Reuters

Takumi Minamino (Williams 59') – 7, Looked eager to make an impact when he came on – and he did. Had a shot from range that did not trouble Martinez, then scored Liverpool’s leveller. AFP

Curtis Jones (Firmino 82') – NA, Had enough time to make a break down the right flank near the end, but opted against crossing when he had the chance. Scored his penalty. Reuters

Rhian Brewster (Wijnaldum 90+2') – NA, Brought on in injury time with penalties in mind, but crashed his shot over via the crossbar. AFP

These were the details of the news Bukayo Sako 8, Pierre-Emerick Aubameyang 7; Mohamed Salah 6 - Arsenal v Liverpool Community Shield player ratings for this day. We hope that we have succeeded by giving you the full details and information. To follow all our news, you can subscribe to the alerts system or to one of our different systems to provide you with all that is new.