The 10 most memorable Champions League finals – in pictures 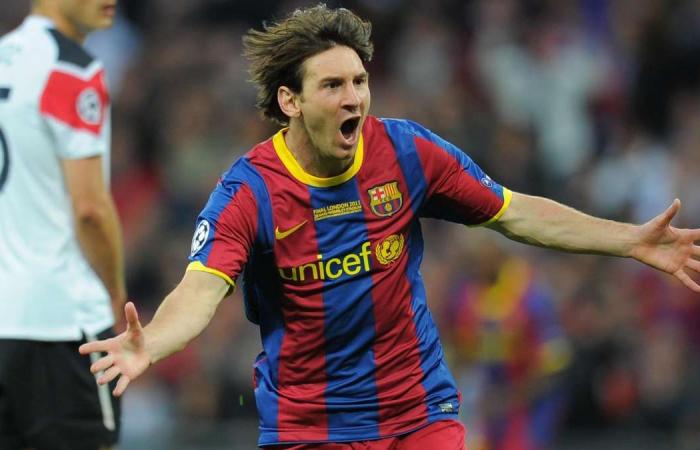 Hind Al Soulia - Riyadh - 1993/94 - AC Milan 4 (Massaro 22' & 45', Savicevic 47', Desailly 58') Barcelona 0: One of the all-time great European Cup final performances. Johan Cruyff's Barcelona 'Dream Team' included the likes of Ronald Koeman, Pep Guardiola, Hristo Stoichkov and Romario, yet they were blown away by the Italian outfit. Even without key defenders Franco Baresi and Alessandro Costacurta, Milan were sensational. From Paolo Maldini at the back, Marcel Desailly in midfield, through to Dejan Savicevic and Daniele Massaro in attack - it was a tactical masterclass in Athens by manager Fabio Capello. “They were just perfect," said Barca goalkeeper Andoni Zubizarreta. Getty

1996/97 - Borussia Dortmund 3 (Riedle 29' & 34', Ricken 71'): Juventus 1 (Del Piero 65'). Dortmund's only European Cup triumph came against the reigning champions and a team that included Didier Deschamps, Zinedine Zidane, Christian Vieri and Alen Boksic. Alessandro Del Piero was a goalscoring substitute. Four years earlier, the Germans had been demolished 6-1 on aggregate by a ruthless Bianconeri in the Uefa Cup final. This time round, former Juve players Jurgen Kohler, Paulo Sousa and Andreas Moller were now in Dortmund colours, bringing with them a winning mentality. Scottish midfielder Paul Lambert man-marked Zidane out of the game in Munich. Getty

1998/99 - Manchester United 2 (Sheringham 90+1', Solskjaer 90+3') Bayern Munich 1 (Basler 6'): A pretty unremarkable game at Barcelona's Camp Nou was made unforgettable by the stunning finale. Alex Ferguson's side made a disastrous start when Mario Basler's 25-yard free-kick caught goalkeeping great Peter Schmeichel off-guard to put the Germans in front. Bayern looked to be coasting towards victory when two substitutes intervened in injury-time. First, Teddy Sheringham equalised with a finish on the turn from eight yards and the game looked to be heading towards extra-time. But then Ole Gunnar Solskjaer rifled into the roof of the net after Sheringham flicked on a David Beckham corner. United were in ecstasy, Bayern devastated. Getty

1999/2000 - Real Madrid 3 (Morientes 39', McManaman 67', Raul 75') Valencia 0: This was a Real side that included the likes of Samba star Roberto Carlos, Spanish goal machine Raul and French hot shot Nicolas Anelka - but it was English midfielder Steve McManaman who stole the show. The former Liverpool winger produced a stunning scissor-kick volley to put his side 2-0 ahead in Paris, against a Valencia side that had knocked out Barcelona in the semi-finals. "It was one of those days when you go out and play, and everything just seems to click," said McManaman. Getty

2003/04 - Monaco 0 Porto 3 (Carlos Alberto 39', Deco 71', Alenichev 75'): The most unlikely of all Champions League winners. Jose Mourinho's Porto may have been reigning Uefa Cup winners, but lifting Europe's premier club trophy was something truly remarkable. A harsh scoreline on Monaco, to be fair, who were ruthlessly exposed on the break by the Portuguese in Gelsenkirchen. Mourinho would soon be heading to Premier League Chelsea, taking with him key Porto defenders Paulo Ferreira and Ricardo Carvalho. It was the last time a club outside of Spain, England, Italy and Germany would win the competition. AP

2004/05 - Milan 3 (Maldini 1' Crespo 39' & 44') Liverpool 3 (Gerrard 54', Smicer 56' Alonso 60') Liverpool win 3-2 on penalties: The most thrilling game on the list and one of the most exciting European Cup finals of all. Liverpool were dead and buried at half-time against a superb Milan team that included Andrea Pirlo, Kaka and Hernan Crespo. But the introduction of German midfielder Dietmar Hamann by manager Rafa Benitez at half-time and driven by captain Steven Gerrard, Liverpool would launch a remarkable comeback. Jerzy Dudek saved from Pirlo and Andriy Shevchenko in the shoot-out to clinch a stunning victory. Getty

2010/11 - Barcelona 3 (Pedro 27', Messi 54', Villa 69') Manchester United 1 (Rooney 34'): A scintillating performance from Pep Guardiola's magnificent side. United's team included Rio Ferdinand, Ryan Giggs and Wayne Rooney, but they proved no match for Barca who produced a footballing masterclass at Wembley Stadium. Man of the match Lionel Messi pulled the strings along with Xavi and the victory was sealed by David Villa's spectacular third goal. United boss Alex Ferguson said: "In my time as manager, it's the best team I've faced." It was the last time Guardiola lifted the trophy. AFP

2013/14 - Real Madrid 4 (Ramos 90+3', Bale 110', Marcelo 118', Ronaldo pen 120') Atletico Madrid 1 - A dramatic night in Lisbon where Real sealed a 10th European Cup against their city rivals. Atletico had been 90 seconds away from a surprise win when Sergio Ramos grabbed a last-gasp leveller. That broke the spirits of Diego Simeone's side as Real ruthlessly took control in extra-time with Gareth Bale and Cristiano Ronaldo among the scorers. It proved too much for Simeone who was sent-off straight after the game after racing on to the pitch to confront Real's Raphael Varane. It would be the first of four final victories in five years for Real. Getty

2014/15 - Juventus 1 (Morata 55') Barcelona 3 (Rakitic 4', Suarez, 68', Neymar 90+7'): A typically thrilling Barca performance led by their attacking trio of Lionel Messi, Luis Suarez and Neymar. Both teams were on the hunt for a Treble after winning domestic league and cup competitions and Juve would make the Spaniards fight all the way in Berlin. In the end, Barca's attacking power won through and they secured a third Champions League in six years and the Treble. Getty

2017/18 - Real Madrid 3 (Benzema 51', Bale 64' & 83') Liverpool 1 (Mane 55'): A match filled with controversy, goalkeeping blunders and stunning goals. Liverpool lost top scorer Mohamed Salah midway through the first half after a challenge by Sergio Ramos left him with a dislocated shoulder. Six minutes after half-time, Reds goalkeeper Loris Karius inexplicably threw the ball against Karim Benzema and watched with horror as the ball rolled into the net. With the score at 1-1, Gareth Bale then scored one of the great European finishes with a stunning overhead-kick. Getty

These were the details of the news The 10 most memorable Champions League finals – in pictures for this day. We hope that we have succeeded by giving you the full details and information. To follow all our news, you can subscribe to the alerts system or to one of our different systems to provide you with all that is new.