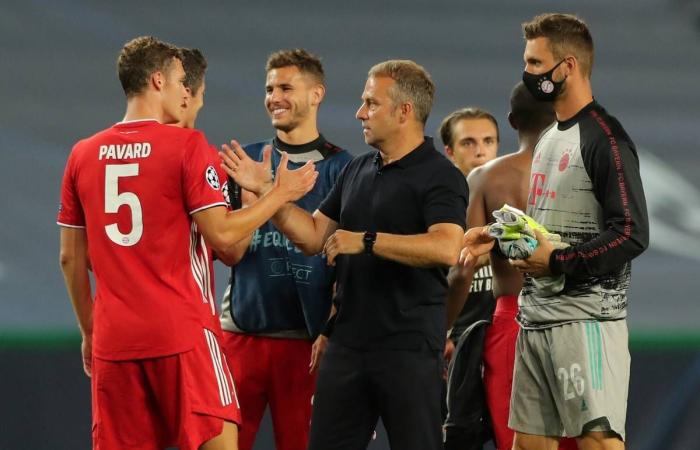 Thank you for reading the news about Bayern Munich must tighten defence against PSG in Champions League final, warns Flick and now with the details

Bayern Munich coach Hansi Flick says the treble-chasing Germans need to tighten their defence against Paris Saint-Germain in Sunday's Champions League final after some nervous early moments in their 3-0 semi-final win over Lyon.

"Lyon fought hard and made things hard for us, we know PSG have quick players and we will have to organise our defence differently," said Flick, whose side scored 42 goals in 10 Champions League games to reach the final.

"Paris are a great team, they fought their way into the semi-final and then reached the final.

"We know they have quick players, but we know our biggest strength is putting our opponents under pressure."

Having already lifted the Bundesliga shield and German Cup this season, Bayern captain Manuel Neuer is relishing the chance of also lifting the Champions League trophy.

Victory over PSG would seal only the second treble in Bayern's history after their 2013 triple success.

"Paris has an attack with big names. There are always a lot of goals with Bayern and PSG," said Germany goalkeeper Neuer.

"Two great teams in this final, it will be a good game for the fans to watch.

"We are very happy to be in the final.

He added: "The difference compared to 2013 team is that the squad is larger.

"We won in 2013 with fewer players, now we have a fantastic group with a good atmosphere in the squad. There are also no killjoys."

For Canadian teenager Alphonso Davies, reaching the Champions League final at the age of 19 is a "dream come true."

Having already helped inflict misery on his hero Lionel Messi in the 8-2 quarter-final drubbing of Barcelona, Davies is delighted to now face Neymar and PSG.

"It's everything you can ask for," said Davies.

Davies says his Bayern team-mates "have basically won everything, but they're still excited. They're still hungry to win this one."

The teenager expects the goals to fly come Sunday.

"This is what you dream of as a footballer - playing against the best in Europe. I'm excited."

Meanwhile, Lyon forward Karl Toko Ekambi said he didn't think Bayern Munich were "unbeatable" in the Champions League despite Wednesday's 3-0 loss to the German side.

"It didn't go our way tonight, we missed some chances and we were up against a great goalkeeper."

Five-time European champions Bayern, who will face Paris Saint-Germain in the final, have won their last 20 matches and are unbeaten in 29 outings, a run that began last December.

"I don't think they're unbeatable," said Toko Ekambi. "We knew they were a great side before the game and we knew we had to play out of our skins to win this match but we weren't able to do it."

"Sometimes you have it, sometimes you don't," he added. "Tonight we didn't do the things we needed to win the match."

Lyon coach Rudi Garcia said he felt it was a "really harsh scoreline" but accepted his team's lack of killer touch was their undoing, ending a surprise run that had accounted for Juventus and Manchester City.

"Even if we can be proud of our run and our match today, it's disappointment first and foremost," said Garcia.

"We really wanted to be in the final, we believed in it and I think we were right to, the match demonstrated that. Leading 1-0 would've have been different or getting back to 2-1, even. I think they're happy to have beaten us, even if they were strong favourites."

Garcia also highlighted the wasted early chances for Memphis Depay and Toko Ekambi that could have dramatically changed the game.

"We lacked success at the start of the match because we had the two biggest chances. We should've been ahead but found ourselves behind through a bit of genius from Gnabry," he added.

"There was a feeling of injustice which weighed on us a bit, we conceded a second goal after giving the ball away and at 2-0 it becomes very difficult."

These were the details of the news Bayern Munich must tighten defence against PSG in Champions League final, warns Flick for this day. We hope that we have succeeded by giving you the full details and information. To follow all our news, you can subscribe to the alerts system or to one of our different systems to provide you with all that is new.