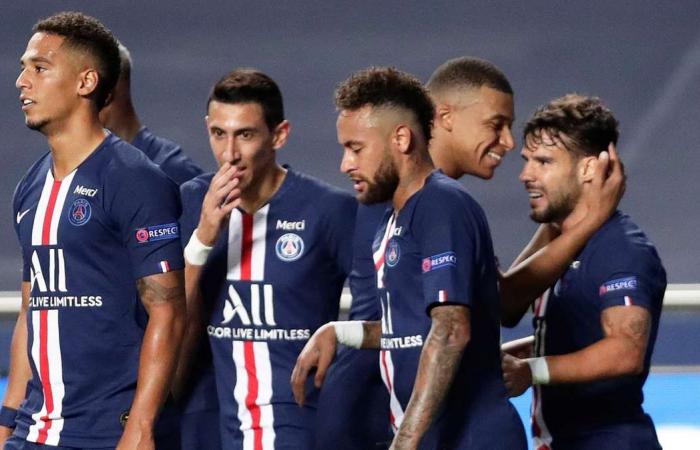 Thank you for your reading and interest in the news Angel Di Maria 9, Neymar 8, Kylian Mbappe 6: PSG v Leipzig player ratings and now with details

Hind Al Soulia - Riyadh - LEIPZIG RATINGS: Peter Gulacsi – 4. Let down by his footwork. He was spared early on when his clearance was ruled to have hit Neymar’s arm, but he gifted PSG a decisive second on the brink of the break. AFP

Nordi Mukiele – 5. His side’s bench were up celebrating his early blockbusting tackle on Bernat as if they had scored. That was about as good as it got for him, though, and Bernat had the last laugh. AFP

Dayot Upamecano – 6. The 21-year-old defensive prodigy will have plenty of better nights than this to look forward to. His side’s struggles here were scarcely his fault. AFP

Lukas Klostermann – 7. His side might have been well beaten on the night, but at least he will be forever able to claim he beat Mbappe in a foot-race, as he did in the second phase. AP

Konrad Laimer – 5. He gave away the free kick that led to the opener with a foul on Neymar. He was tireless in his running up the right flank, but was substituted immediately after being booked. AFP

Marcel Sabitzer (right) – 6. Had the sight of goal – albeit from range – on a number of occasions but was unable to make them count. AFP

Kevin Kampl – 5. Leipzig’s midfield screener was lucky his mistake did not lead to PSG doubling their early lead, and he was profligate in possession too often. Reuters

Angelino – 5. The Manchester City loanee struggled to have any impact from his position on the left side. Getty

Christopher Nkunku – 5. Frustrated in the opening exchanges, and was lucky not to be booked for a succession of fouls. Manager Julian Nagelsmann took him out of the firing line after 45 minutes. AP

Yussuf Poulsen – 6. It was understandable that the captain, who played in Germany’s third tier during Leipzig’s rise, was irritable as he saw his Champions League dream die, but it did not help his side. AFP

Dani Olmo – 4. Endured a miserable first half, the highlight of which was being fouled by Kimpembe, and was hooked at the interval. AP

SUBSTITUTES: Emil Forsberg – 7. Provided some of the forward impetus that Leipzig required after being brought on at half time, but their chances were soon extinguished. Getty

Patrik Schick – 7, His half-time introduction initially roused the German side, but Bernat’s goal took the wind from their sails. Getty

Marcel Halstenberg – 6. Had little chance to make an impact, yet still managed to get booked for a dubious foul on Neymar. Reuters

Tyler Adams – 6. At least showed some bite after his second-half introduction, but it was not enough to turn the tide. AFP

Willi Orban – NA. Introduced so late. At least he can say he played in a Champions League semi-final. AP

PSG RATINGS: Sergio Rico - 6. A Champions League semi-final is a rarefied place for someone who struggled for Fulham in the English Premier League last season. He will not be the only one who was happy he was rarely tested. Getty

Thilo Kehrer – 6. Made hard work of his match up with Nkunku in the first half, without being overly stretched. EPA

Presnel Kimpembe – 7. Yellow carded just before the break for blocking off Olmo. Made a fine last-ditch tackle to thwart Leipzig when PSG were 3-0 up. AFP

Thiago Silva – 7. Battled on after suffering a facial injury at a corner and showed his class under pressure. Copped another one in the face late on, too. AFP

Juan Bernat – 8. Full of diligent running along the PSG left flank, and somehow popped up in the centre-forward position to head in the third, which killed the tie. Reuters

Marquinhos – 8. He settled PSG nerves with a towering header in the 13th minute, and was a vital presence in the PSG midfield throughout the 90 minutes. AFP

Leandro Paredes – 7. Understated, but just what PSG required as he won the ball and fed it to a forward line who were buzzing. Getty

Ander Herrera – 7. His sound use of the ball went unnoticed for the large part, but allowed the flashier forward stars to strut their stuff. AP

Neymar – 8. He was wasteful when he hit the post in the sixth minute, but visionary when he did similar in the 35th from a wide free kick. Deft flick set up Di Maria’s goal. AP

Angel Di Maria – 9. Delicious deliveries for the headers by Marquinhos and Bernat, and made no mistake with his finish for the second. Outstanding. Reuters

Kylian Mbappe – 6. Created a chance with fine skill for Neymar which was wasted in the sixth minute, but was trying to find sharpness on his return from injury. Getty

SUBSTITUTES: Julian Draxler – NA. Barely spotted his brief time on the field at the end, and will not be expecting to dislodge any of the big guns in the XI for the final. Reuters

Marco Verratti – NA. Not enough time to press his case for a starting place in the final, but the fact he could take the field following injury is still a good sign. Reuters

Eric Maxim Choupo-Moting – NA. Did not have enough time to work up a sweat after his late introduction. AFP

Pablo Sarabia – NA. Brought on late as Thomas Tuchel gave some of the stars a curtain call. AFP

These were the details of the news Angel Di Maria 9, Neymar 8, Kylian Mbappe 6: PSG v Leipzig player ratings for this day. We hope that we have succeeded by giving you the full details and information. To follow all our news, you can subscribe to the alerts system or to one of our different systems to provide you with all that is new.