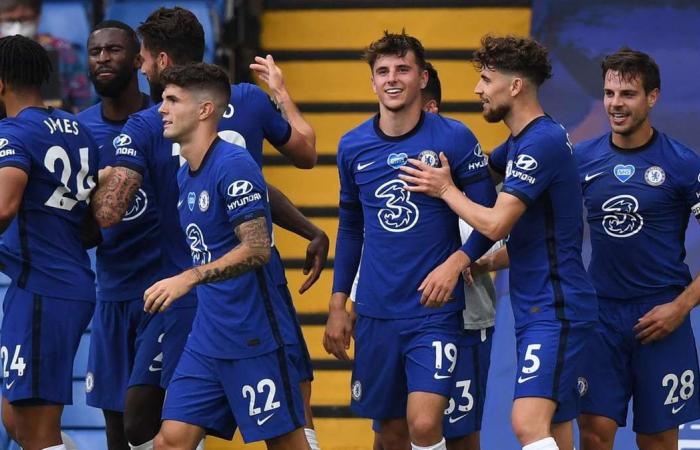 Thank you for your reading and interest in the news Mason Mount 8, Christian Pulisic 8, Kepa Arrizabalaga 4: Chelsea 2019/20 season ratings and now with details

Hind Al Soulia - Riyadh - CHELSEA 2019/20 RATINGS: MANAGER: Frank Lampard - 8. Lampard's appointment last summer was met with realistic optimism. Chelsea's greatest goalscorer was back at the club but had to contend with a transfer embargo that meant he was unable to replace the sold Eden Hazard. Billed as Chelsea's weakest squad in years, Lampard steered the Blues to a top four finish in the Premier League, the FA Cup final, and the Champions League last 16. All while giving ample opportunities to the club's youngsters. There is still plenty of room for improvement, particularly with the team's defensive frailties, but an impressive first year in the Stamford Bridge dugout. Getty Images

GOALKEEPERS: Kepa Arrizabalaga – 4. There are many things you want from the world’s most expensive goalkeeper. Being a liability is not one of them. The Spaniard had one of the worst save percentages in the Premier League and has been a major culprit in Chelsea’s defensive failings. His Stamford Bridge future looks bleak. Reuters

Willy Caballero – 6. Chelsea’s No 2 has had a decent season. Limited to five league appearances, the Argentine has been the Cup keeper, helping his side reach the FA Cup final, so there can’t be too many complaints. EPA

DEFENDERS: Antonio Rudiger – 6. It was a mixed bag for the German centre-back, whose performances have ranged from commanding to comical. Should be part of Frank Lampard’s plans next season unless a tempting offer is made. Getty Images

Kurt Zouma – 7. The Frenchman made more appearances than any other central defender to mark an encouraging return to the first team after successive seasons on loan. As culpable as the rest for Chelsea’s back-line struggles but redeemed himself with 'that' tackle against Crystal Palace. AP

Andreas Christensen – 6. In and out of the team this season, the Dane could be the one to make way if Chelsea recruit a new centre-back this summer. Reuters

Cesar Azpilicueta – 8. Chelsea’s captain remains as important as ever. Not only the team’s stand-out defender but chipped in with four goals and seven assists. His versatility has proved priceless when Lampard switched between formations. AP

Emerson Palmieri – 5. Started the season as first choice left-back but the Italian barely featured after the turn of the year. Is expected to leave this summer. AP Photo

Reece James – 8. An impressive debut season for the English right-back. Solid in defence, full of pace and power going forward, and with an excellent final delivery. At just 20, James is only going to get better. Chelsea have their right-back for the next 10 years. AFP

Marcos Alonso – 6. This is a unique one as the Spaniard deserves a 7 or 8 as a wing-back but would probably get a 3 or 4 as a left-back. His overall rating is a reflection of that. EPA

Fikayo Tomori – 7. Like James, another academy graduate to impress in his breakthrough season. Tomori started brightly before injury disrupted his campaign. He looks the real deal, though, and should have a bright future at the Bridge. Scored arguably Chelsea's goal of the season against Wolves. Shutterstock

Tariq Lamptey – 6. Looked lively in the few games he played, particularly the 31-minute cameo against Arsenal. Opted to leave the club in January and has since helped Brighton remain in the Premier League. AP

MIDFIELDERS: N’Golo Kante – 7. After three exemplary seasons for Chelsea, this has been the toughest for the French midfielder, who has endured numerous injury setbacks. Still remains vitally important to the Blues and will look to reset next season. PA Wire

Jorginho – 7. The Italian playmaker was superb during Chelsea’s fine autumn run and formed a good partnership with Mateo Kovacic. But he can be too one-dimensional and gets exposed in a defensive role. A good offer could see him leave this summer. AFP

Mason Mount – 8. Eight goals and six assists do not do justice to how good the English midfielder has been this season. A classy operator on the ball, fantastic in the high-press and brimming with quality. Lionel Messi believes Mount is destined for the top, so who are we to argue? Getty Images

Mateo Kovacic – 8. Had a decent enough loan spell last season but many fans did not think it warranted a €40m (Dh170m) move. That fee has so far proved money well spent after a brilliant campaign from the Croatian midfielder. Should get even better next year. Getty Images

Ruben Loftus-Cheek – 6. There is no disputing the English midfielder’s quality, but injuries have become a real issue. If he is fit and firing next season, Loftus-Cheek should have an important role in the squad. AFP

Ross Barkley – 6. His best season in a Chelsea shirt with some real moments of quality. But the consistency that separates good and great players is still missing. EPA

Billy Gilmour – 7. Broke through in style with back-to-back man of the match performances against Liverpool and Everton. Looked a bit off the pace after the restart before getting injured, but the 19-year-old midfielder is an exciting talent. Reuters

FORWARDS: Christian Pulisic – 8. The American winger was held back at the start of the season and showed glimpses of his quality before injury struck. However, after the restart, Pulisic was Chelsea’s stand-out player and signed off his debut campaign with 11 goals and 10 assists. He will be even better next season. AFP

Tammy Abraham – 8. The English striker’s form tailed off in the weeks either side of the lockdown but it should not take away from a fine debut season. Abraham’s goals in the first few months were what propelled Chelsea into top-four contention. He ended the campaign with 18 goals and six assists in all competitions. Getty Images

Callum Hudson-Odoi – 5. Another exciting talent for the future, this was meant to be a breakthrough season for Hudson-Odoi. Unfortunately, injury held the winger back, but at 19 he has plenty of time to progress. AFP

Willian – 8. Chelsea’s senior forward has led by example this season with 11 goals and nine assists. If, as expected, the Brazilian leaves this summer, then it was a fine way to complete his seven-year stay at Stamford Bridge. Getty Images

Michy Batshuayi – 3. Barely featured this season and this must surely be the summer the Belgian striker leaves for good. AFP

Pedro – 5. Injuries, illness, and a drop down the pecking order saw the Spanish winger’s impact limited during his final season. Will be remembered fondly by the Chelsea faithful. Getty Images

Olivier Giroud – 8. Almost left in January after growing frustrated with his lack of game time. Chelsea fans will be grateful he didn’t as the French striker hit a run of goalscoring form after the restart and replaced Abraham as Chelsea’s first choice striker. EPA

These were the details of the news Mason Mount 8, Christian Pulisic 8, Kepa Arrizabalaga 4: Chelsea 2019/20 season ratings for this day. We hope that we have succeeded by giving you the full details and information. To follow all our news, you can subscribe to the alerts system or to one of our different systems to provide you with all that is new.