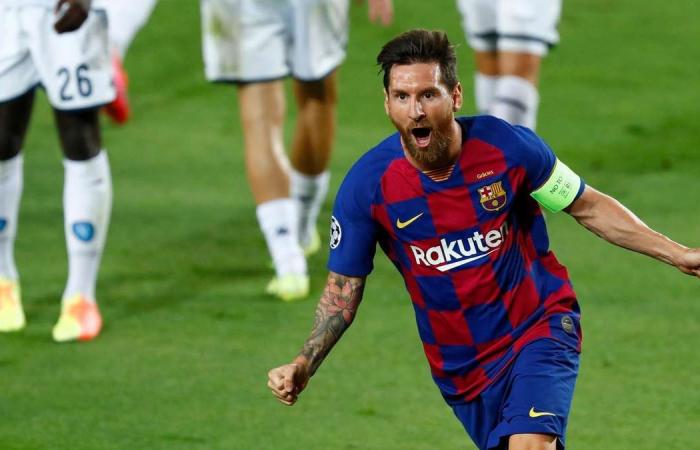 Thank you for your reading and interest in the news Lionel Messi 9, Frenkie de Jong 8, Lorenzo Insigne 8: Barcelona v Napoli player ratings and now with details

Hind Al Soulia - Riyadh - BARCELONA: Marc-Andre ter Stegen – 6, Lucky to be saved by a post from Lozano’s late header, having let it go. Insigne sent him the wrong way from the spot for Napoli’s goal. AFP

Nelson Semedo – 7. Such a threat from right back, as he made some blistering runs down the line to stretch Napoli. AFP

Gerard Pique – 7, Had a scary start when he inadvertently set up Mertens, who hit the post, but he made some vital interventions when Napoli pressed later. Getty Images

Clement Lenglet – 8, Towered over the Napoli defence, albeit with the aid of a shove on Demme, for his headed opener. Also made blocks at vital moments. AP Photo

Jordi Alba – 5, Looked hesitant at times when the away side were trying to mount their unlikely revival, and wasted some good crossing positions. AP Photo

Sergi Roberto – 6, Generally occupied with maintaining possession in the midfield, but made some swift breaks forward, too. AFP

Ivan Rakitic – 6, Termed “the ultimate recycler” on commentary – but he was uncharacteristically wasteful at time. And he gave away a penalty. Getty Images

Frenkie de Jong – 8, Showed a brilliant range of passing. The best of them counted for nothing, though, as Messi’s goal from his cute chip was ruled out. AFP

Lionel Messi – 9, Determination, skill, and a little bit of luck enabled his first goal. He was unlucky to have another disallowed by VAR for handball. EPA

Luis Suarez – 7, Unstoppable penalty to put the hosts into a comfortable position. He did not have an abundance of chances, but used the ball cleverly. Booked for timewasting. AP Photo

Antoine Griezmann – 5, The least conspicuous of Barcelona’s celebrity forward line, and he looked to be lacking sharpness. AFP

Junior Firpo – NA, Came on for Suarez in injury time as the hosts attempted to chew up time. AFP

David Ospina – 6, Of the goals Barcelona scored, he only really had a chance with Messi’s, when a stronger hand might have turned it wide. Reuters

Giovanni Di Lorenzo – 6, Had some tough moments, first when he fouled de Jong, and then late on when he was robbed of possession by Messi. AFP

Kalidou Koulibaly – 6, Gave away the penalty after Messi picked his pocket. Tried to atone for it as a big presence at attacking set pieces. Reuters

Kostas Manolas – 6, His error in the second half could have totally ended Napoli’s rally, and he was frequently stretched by the movement of Suarez. EPA

Mario Rui – 6, Had his work cut out with Messi so often finding himself in his orbit, and he looked nervous when Suarez fell over his challenge in the second half. Getty Images

Diego Demme – 5, Rag-dolled by Lenglet for the opening goal – possibly unfairly – and struggled to gain a foothold before being replaced at the break. EPA

Jose Callejon – 6, Was at his brightest when Napoli started the second half with renewed belief, before being subbed with 20 minutes to go. AFP

Fabian Ruiz – 7, As Napoli mounted their bold – but ultimately in vain – resistance in the second half, he shone brightly. Reuters

Piotr Zielinski – 6, The Polish midfielder was shown a yellow card for a tactical foul when he pulled back Messi, and looked shattered when replaced with 20 minutes left. Getty Images

Lorenzo Insigne – 8, Ever threatening from the left wing, especially at set pieces, and was cool as he scored from the spot. EPA

Dries Mertens – 7, Sliced a shot against the post in the second minute when well placed, but later won the penalty when Napoli were 3-0 down. EPA

Stanislav Lobotka – 6, Brought on at half-time for Demme, but had little more impact than the man he replaced. Reuters

Matteo Politano – 6, Came on for Callejon, and did have a chance but saw his powerful drive blocked. EPA

Hirving Lozano – 7, The Mexican headed over with his first touch when well placed from Insigne’s cross, and later hit the post. Reuters

Eljif Elmas – 6, Brought on for Ruis, who was arguably Napoli’s brightest performer after the break, and he slotted in well. AFP

Arkadiusz Milik – 6, Heartbroken to have his headed goal ruled out within a minute of coming on late on. AP Photo

These were the details of the news Lionel Messi 9, Frenkie de Jong 8, Lorenzo Insigne 8: Barcelona v Napoli player ratings for this day. We hope that we have succeeded by giving you the full details and information. To follow all our news, you can subscribe to the alerts system or to one of our different systems to provide you with all that is new.