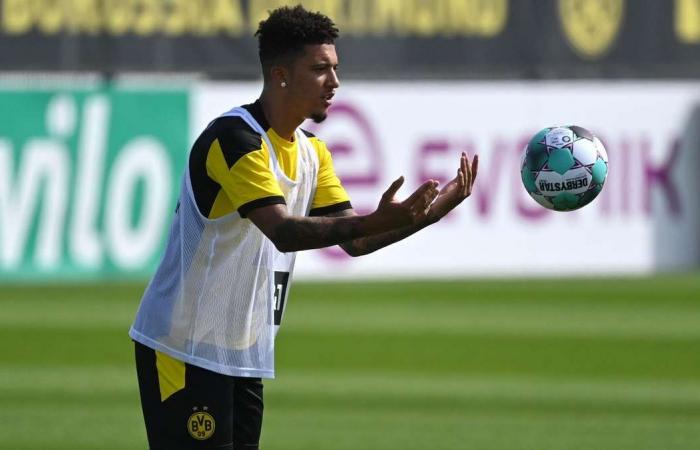 Hind Al Soulia - Riyadh - Borussia Dortmund winger Jadon Sancho appears to be closing in on a big-money move to Manchester United after reportedly agreeing in principle a lucrative five-year contract with the Premier League club.

Sancho is United's primary transfer target, although a transfer fee has yet to be agreed with Dortmund, who are holding out for €120 million (Dh519m). As such, the BBC reported on Monday that the German club have set United a deadline of August 10 to complete the deal to avoid disruption to their pre-season preparations.

While Dortmund are seeking €120m, Sky Sports have claimed the Bundesliga outfit are prepared to accept less money up front and receive the rest in instalments and bonus-related fees.

As the two clubs remain engaged in negotiations over a transfer fee, The Sun has claimed Sancho is ready to sign a five-year contract with United worth around €240,000 per week.

The imminent exit of Chilean forward Alexis Sanchez - and his €555,000-a-week wages - to Inter Milan, where he spent the past season on loan, will help free up United's wage budget. Sancho is also expected to take over the famous No 7 jersey from Sanchez.

Sancho, who joined Dortmund from United's rivals Manchester City in 2017, has emerged as one of the most highly-regarded footballers in Europe. Last season, the 20-year-old winger produced 17 goals and 17 assists over 32 Bundesliga games.

United great Ryan Giggs believes his former club should do all they can to sign Sancho this summer - as well as Aston Villa captain Jack Grealish.

"Sancho is quick, direct but also an intelligent player," Giggs told the Webby and O'Neill YouTube channel. "What I like about him is when he gets into those areas with the final ball, he doesn't panic. A lot of quick wide players sometimes do but he picks out the right pass.

"He's someone who can counter-attack if we're going to play that but also if a team are going to sit back, he can beat players and make things happen.

"They are two signings that may be available and if we're able to get them, I would go and get them."

In July, Dortmund beat United to the signing of Birmingham City teenager Jude Bellingham, and in January completed a deal for Norwegian striker Erling Haaland, with whom United were also strongly linked.

These were the details of the news Jadon Sancho edges closer to Manchester United move after agreeing five-year contract - reports for this day. We hope that we have succeeded by giving you the full details and information. To follow all our news, you can subscribe to the alerts system or to one of our different systems to provide you with all that is new.