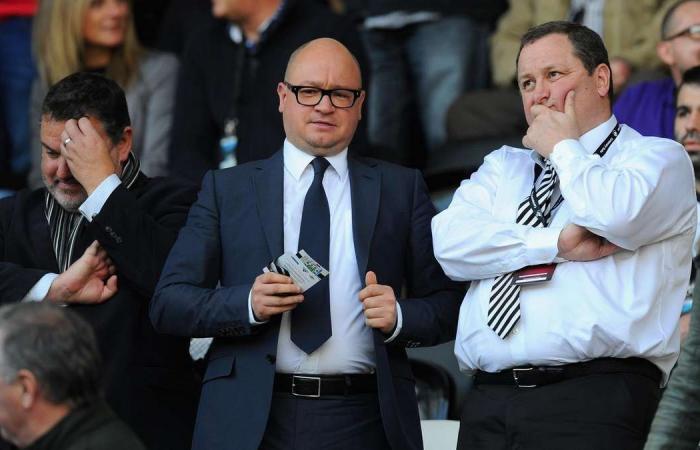 Hind Al Soulia - Riyadh - Treatment of Kevin Keegan: A surprise appointment at the beginning of Ashley's reign to replace the sacked Sam Allardyce, Keegan was brought back to Tyneside for his second spell as manager - much to the delight of the Geordie faithful. But the move would quickly turn sour for all parties as Keegan resigned just eight months later after becoming increasingly exasperated with the club's transfer policy. Keegan would later win £2 million in damages and Ashley's relationship with the fanbase would never recover. Getty

Appointing Dennis Wise as director of football: A hugely unpopular figure on Tyneside during his playing days with Chelsea, Wise was brought in at boardroom level the same time as Keegan primarily to sign players and develop their academy. It was the player recruitment part that would prove his undoing as Keegan would end up quitting as manager due to the signings Wise made. When Keegan took the club to court for wrongful dismissal, he revealed that his relationship with Wise broke down when he was told Uruguyan international Ignacio Gonzalez was joining the club not because of his football ability, but as a favour to two influential South American agents. Wise would follow Keegan out of the door a little over a year later, his reputation badly damaged. Getty

Appointing Joe Kinnear. Twice: After Keegan's exit, Ashley decided to bring in Joe Kinnear as interim manager in 2008. The 61-year-old had not been a top-flight manager for nearly a decade and had been out of work since being sacked by Nottingham Forest four years earlier. Kinnear's first spell was best remembered for his foul-mouthed rant at journalists in his first press conference. The Irishman, who had a history of health problems, saw his spell in charge come an abrupt halt after less than five months when he had to undergo triple heart bypass surgery. Bizarrely, Ashley brought him back again in 2013 as director of football when Alan Pardew was manager. In a Talksport interview soon after his second appointment, Kinnear made a number of claims about his managerial record which were untrue and mispronounced the names of a number of Newcastle players. He would resign from his role barely seven months later. Getty

Treatment of Alan Shearer: Newcastle's record goalscorer was parachuted in as manager to try and rescue Newcastle from relegation after Kinnear's exit to undergo heart surgery. Shearer, who had no previous coaching experience, had just eight games to turn the club around but could only manage only one win as the club finished third bottom, one point adrift of safety. Shearer wanted the job on a full-time basis and had provided Ashley with a blueprint for rebuilding the club - but was never given the chance and has never been offered an explanation as to why by the owner. PA

Selling Andy Carroll: A sign of what Newcastle had become under Ashley as the club cashed in on their star striker in the January transfer window, leaving no time for a replacement to be found. Carroll's goals had helped guide Newcastle to promotion the previous campaign and he had started the Premier League season in superb form wearing the club's famous No 9 jersey. A born and bred Geordie, Carroll cracked a hat-trick in the season opener against Aston Villa, also scoring against the likes of Arsenal, Chelsea and Liverpool. The latter came calling with a blockbusting £35m bid in the new year and the supporters' latest goalscoring hero was gone.

Renaming St James' Park: In an attempt to show potential sponsors the value in paying for the naming rights in 2011, Newcastle’s iconic home was renamed the Sports Direct Arena - after Ashley's sportswear company. Supporters were furious at the decision that would be reversed as a goodwill gesture by new club sponsors Wonga less than a year later. Ashley would later admit the move had been a mistake. Reuters

Giving up on the cups: Newcastle's record in the League and FA Cups is nothing short of an embarrassment under the Ashley regime, where Premier League survival has been paramount. When Steve Bruce guided the Magpies to the FA Cup quarter-finals in the season just finished, it was the first time they had been beyond Round 4 since Ashley's arrival. In that time, the best they managed in the League Cup was Round 5. Getty

Failing to build on fifth-place finish: In the most successful season of the Ashley era, Alan Pardew would guide the Magpies to fifth-place in the league and win the manager of the year award. The club bought well pre-season - signing the likes of Demba Ba and Yohan Cabaye - and then strengthened again in January when striker Papiss Cisse was signed to help fire the club to their best finish since the Bobby Robson team of 2003/04. But rather than build on that success, only one signing was made in the summer - midfielder Vurnon Anita, a £6.7m signing from Ajax - and the squad failed to cope with the extra demands of Europa League football. Newcastle finished 16th in the Premier League, avoiding relegation by five points. Getty

Handing out mammoth contracts: After the successful 2011/12 season, Ashley decided to award manager Pardew, chief scout Graham Carr, plus coaches John Carver, Steve Stone and Andy Woodman huge eight-year contracts. Managing director Derek Llambias said Newcastle wanted continuity to match English football's top clubs, citing the records of Alex Ferguson and Arsene Wenger at Manchester United, respectively. But Pardew was no Ferguson or Wenger and he quit the club three years later after several season struggling in the bottom half of the table and losing the support of home fans. Woodman followed Pardew onto his next job at Crystal Palace, Carver and Stone were sacked soon after, while Carr lasted until 2017. Pardew's contract would have come to an end in June of this year. AFP

Failing to keep Rafa Benitez: The Spaniard - who had won La Liga, the Uefa Cup, Europa League and Champions League while in charge at Valencia, Liverpool and Chelsea - was much loved by supporters and would help guide the club to promotion out of the Championship and two mid-table finishes in the top-flight. But Benitez would become increasingly frustrated by what he perceived as a lack of ambition and investment by Ashley and would leave for a new - and extremely well-paid - challenge in China. Steve Bruce, who had never won a major trophy in his managerial career, was named as his replacement. Reuters

These were the details of the news The 10 biggest blunders of the Mike Ashley era at Newcastle United – in pictures for this day. We hope that we have succeeded by giving you the full details and information. To follow all our news, you can subscribe to the alerts system or to one of our different systems to provide you with all that is new.