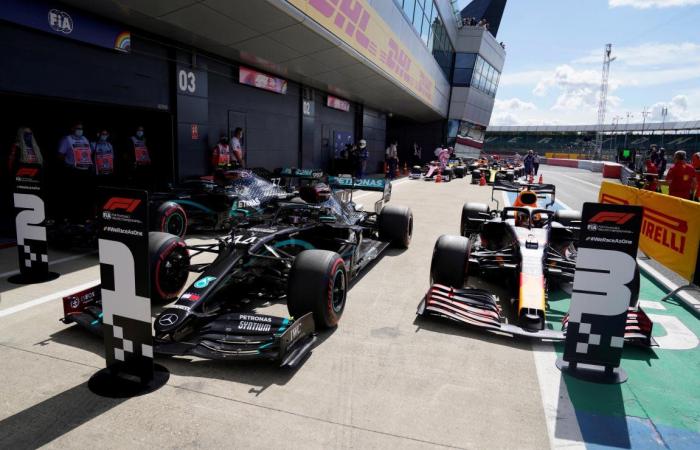 SILVERSTONE, UK: Max Verstappen believes he has a “fighting chance” of creating an upset in Sunday’s British Grand Prix despite conceding that rivals Mercedes have a massive speed advantage.
The Red Bull-driving Dutchman admitted that Mercedes drivers, pole sitter Lewis Hamilton and Valtteri Bottas, who smashed the track record twice each in qualifying, were untouchable for sheer pace.
But, he said afterwards, Red Bull had a package to close the gap in race conditions and that this gave him hope that all is not lost.
“It’s different in the race,” he said.
“We believe we are a little bit closer in race trim — I don’t say that I am going to be fighting them, but at least we have a fighting chance from third.
“I think my lap at the end of Q2 was pretty good, but you could see very early on in qualifying that they were just way too fast, like they have been the last few races.
“You just have to accept that. You try to do the best you can and that’s P3 for us so I’m pretty pleased about that.”
The Dutchman was a second adrift of Hamilton’s track record lap for pole in qualifying, but has a proven record of overcoming the odds to deliver strong results.
But, he added, he knows his car is not an easy machine to master in the gusty winds that have blown through Silverstone during practice and qualifying.
“With these new types of cars from the last few years, they’re very sensitive to wind because they’re that big and that wide, and especially here at Silverstone you can really feel that,” he explained.
“Yesterday (Friday), for example, it was really tricky in the low-speed corners, but today, the wind changes and it becomes like a completely different car, luckily in the right way, because today was a lot more fun to drive.”

These were the details of the news Max Verstappen eyes Silverstone ‘fighting chance’ against Mercedes’ untouchables for this day. We hope that we have succeeded by giving you the full details and information. To follow all our news, you can subscribe to the alerts system or to one of our different systems to provide you with all that is new.