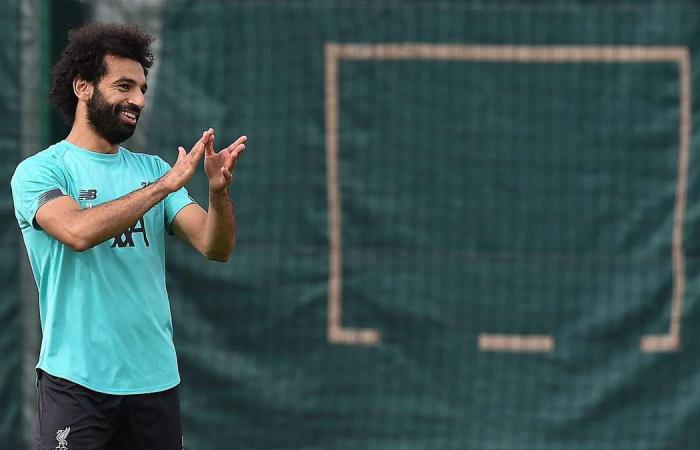 Thank you for your reading and interest in the news Mohamed Salah, Adam Lallana and Jurgen Klopp prepare for Liverpool's last game of the season - in pictures and now with details

Hind Al Soulia - Riyadh - LIVERPOOL RATINGS: Alisson - 6: Other than a save to deny Willian the only other time the Brazilian touched the ball was picking it out of his net three times. AFP

Trent Alexander-Arnold - 8: If there is a finer striker of the ball in the Premier League he's being well hidden. Scored an exquisite free kick and also registered his 12th league assist of the campaign. AFP

Joe Gomez - 6: Engineered plenty of attacks from the back but a lack of communication with his partner Van Dijk resulted in them both on the deck and Chelsea scoring a third goal. AFP

Virgil van Dijk - 6: Given how brilliant he has been over the past two seasons the Dutchman's shortcomings over the past three games can easily be forgiven. EPA

Andrew Robertson - 8: Never happier than being part of Liverpool's attacks down the left. Ran the length of the field before supplying the cross for Liverpool's fifth. Reuters

Fabinho - 7: The ball sticks to the Brazilian as if he has glue on his boots. AFP

Naby Keita - 9: Got the fireworks started at Anfield with a rocket of a goal and was a constant thorn in Chelsea's side. AFP

Sadio Mane - 7: Some of the Senegalese forward's control was simply mesmeric at times. EPA

Mohamed Salah - 6: Wayward with his finishing but always a threat. Reuters

Roberto Firmino - 8: Finally broke his Anfield duck with a superb header and displayed some beautiful lay-offs for his teammates. AFP

Curtis Jones (on for Keita, 66') - 7: Covered plenty of ground and a fifth appearance of the season means he qualifies for a Premier League winner's medal. Reuters

Alex Oxlade-Chamberlain (on for Salah, 79') - 6: Fresh and fast legs to get on the end of Robertson's cross to score Liverpool's fifth. Reuters

Divock Origi (on for Mane, 87') - NA: Ran the channels well in what little time he had. EPA

CHELSEA RATINGS: Kepa Arrizabalaga - 5: Conceded five but in fairness to the Spaniard he didn't stand a chance with any of them. Reuters

Cesar Azpilicueta - 6: Struggled to contain Mane and had a few run-ins with the Liverpool attacker. Reuters

Kurt Zouma - 6: Made a timely intervention to deny Salah when through on goal in the second half. AFP

Antonio Rudiger - 6: The German was one of the most dominant centre-backs in the league pre-lockdown. Has struggled to recapture that form since the restart. EPA

Reece James - 7: Showed Alexander-Arnold isn't the only English right-back who can deliver quality balls into the box. EPA

Marcos Alonso - 6: Spanish wing-back looked better going towards Liverpool's goal than back towards his own. Reuters

Mateo Kovacic - 6: Right to feel aggrieved after replays showed he won the ball in a tussle with Mane but was penalised for a foul. Alexander-Arnold banged in the free-kick and Chelsea were always chasing the game from that moment. AFP

Mason Mount - 5: Wasted two opportunities to supply Giroud in the first half from promising positions. Made way in the second half and Chelsea improved as a result. AFP

Willian - 6: The Brazilian had a quiet game by his standards and his usually assured touch deserted him when presented with a chance in the first half. PA

Olivier Giroud - 7: Attacked every ball with gusto and showed excellent reactions to force home Chelsea's first after Alisson's initial save from Willian. EPA

SUBS: Tammy Abraham (on for Giroud, 59') - 6: Took his goal well to reduce the arrears. Reuters

Christian Pulisic (on for Mount, 59') - 8: The American terrorised Liverpool's defence, assisting for Abraham's goal and then slamming home Chelsea's third. Could have had another soon after but finish was poor. Reuters

Callum Hudson-Odoi (on for Willian, 59) - 7: Another of the Chelsea troika introduced on the hour who made an impact, crossing for his fellow winger for Chelsea's third. Reuters

These were the details of the news Mohamed Salah, Adam Lallana and Jurgen Klopp prepare for Liverpool's last game of the season - in pictures for this day. We hope that we have succeeded by giving you the full details and information. To follow all our news, you can subscribe to the alerts system or to one of our different systems to provide you with all that is new.