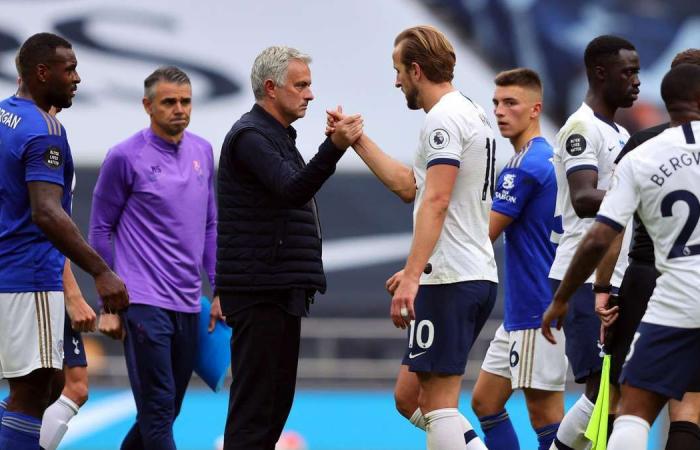 Hind Al Soulia - Riyadh - SPURS RATINGS: Hugo Lloris - 8: Flapped at one cross in the first half but Leicester couldn't take advantage. Produced a brilliant one-handed save to keep out a Perez volley and saved from the attacker again later in the half. Tipped a swerving Gray free-kick over after the break. Getty

Serge Aurier - 7: Struggled early on against Barnes but settled down as match went on. Reuters

Ben Davies - 7: A couple of timely interventions from the full-back, particularly one vital header that denied Morgan a chance to score. PA

Harry Winks - 6: Solid if unspectacular from the midfielder. PA

Moussa Sissoko - 7: Puts in so much work defensively for Spurs. Can be a bit clumsy and loose in possession at times but generally a rock in midfield. EPA

Giovani Lo Celso - 7: One glorious ball over the top to put Son clear in first half. Always busy. PA

Lucas Moura - 6: The odd devastating show of pace but not at his most cutting edge today. Getty

Son Heung-min - 7: Showed great pace and footwork before his shot was deflected into the net for the opening goal. Forced Schmeichel into making good save later in first half. AFP

Harry Kane - 9: Sensational performance. Lovely pass with outside of boot to help set up the first, perfect left-foot finish into corner for the second, followed by fantastic curling shot with his right to make it 3-0. Contributes all over the pitch and is hitting top gear again after returning from injury. Getty

LEICESTER RATINGS: Kasper Schmeichel - 7: Didn't do much wrong but conceded three. No chance with the goals - one massive deflection and two Kane crackers. AFP

Jonny Evans - 5: Defender has started every Premier League game for Leicester this season but, like the rest of Leicester's defence, struggled to cope with Son and Kane. One woeful pass in second half that allowed Son the chance to break. Booked for cynical foul on Kane and lucky not to see red minutes later after swinging an arm in the England striker's face. Getty

Wes Morgan - 6: Veteran carrying quite a bit of timber nowadays and relies on his experience and defensive knowhow. One moment in second half when Kane threatened again but Morgan refused to let him onto his right and was able to deflect his left-foot shot wide. Getty

Ryan Bennett - 5: Left on his backside by Son's quick feet for first goal and made it far too easy for Kane to curl home the third. Hooked at half-time. Getty

James Justin - 6: Unfortunate own goal after deflecting Son's shot into the net. One excellent tackle to stop a marauding Son run in second half. PA

WIlfred Ndidi 6: Did OK in midfield without really influencing the game. AP

Luke Thomas - 6: Caught in possession twice in first half that would both end up leading to Spurs scoring on the counter-attack. AFP

Harvey Barnes - 7: Spurs found him a handful down the left, particularly early on. Getty

Ayoze Perez - 6: Showed some wonderful skill to control then produce a first-time volley that forced Lloris into fine save. Spaniard was denied by the Frenchman again later in the first half. Taken off just before the hour mark. Getty

Jamie Vardy - 6: Saw a looping header go over the bar in first half and had a cheeky back-heel effort stopped by Lloris. Starved of service after break. AFP

SUBS: Demarai Gray - (On for Bennett 45') 7: Lively when he came on. Saw free-kick saved by Lloris. Reuters

Dennis Praet - (On for Tielemans 70') 6: Sliced one shot well wide of the target. Reuters

George Hirst - (On for Barnes 83') NA: Headed one half-chance over the bar on his Premier League debut and cracked another wide. PA

These were the details of the news Tottenham 'lucky to have' Harry Kane after scoring twice to beat Leicester City for this day. We hope that we have succeeded by giving you the full details and information. To follow all our news, you can subscribe to the alerts system or to one of our different systems to provide you with all that is new.